Ten years ago this week I got on a plane with Oliver and flew to the far eastern edge of Europe. Here’s what we looked like just before our departure, loaded up with our backpacks and ready for adventure: 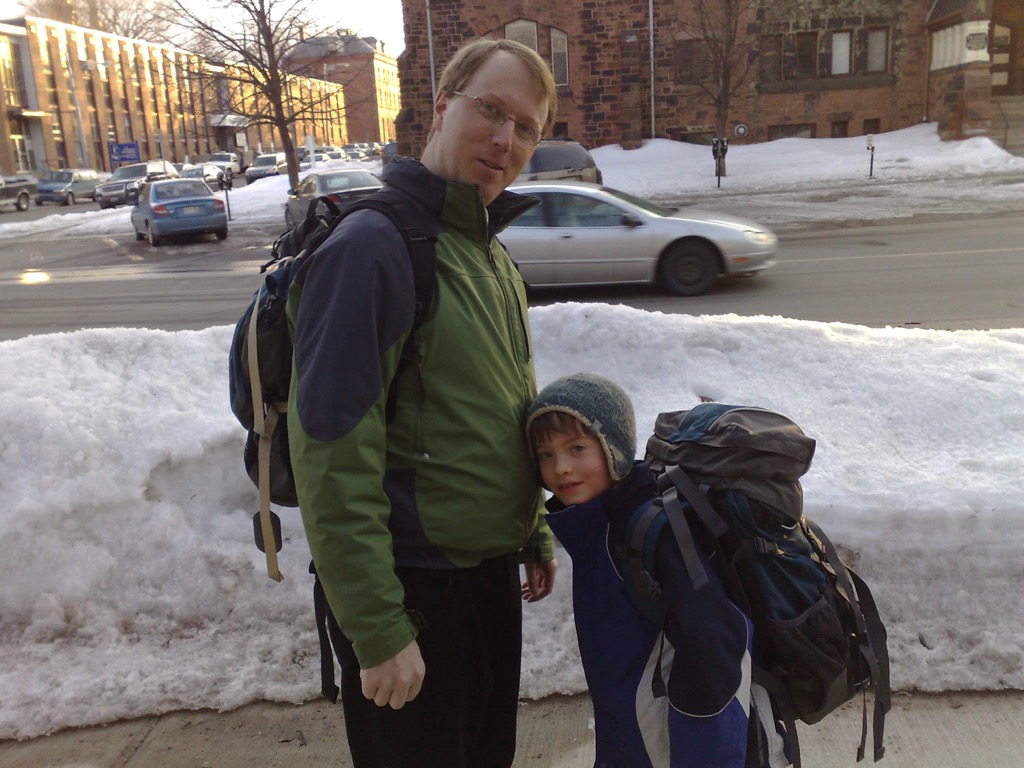 What you see on our backs is the sum total of the luggage we took; it was the apotheosis of my packing-light phase: I was traveling without a laptop (a feat never repeated, before or after) and with only a few clothes in my pack. Oliver was more well-resourced, especially if measured by luggage-to-body-weight ratio; but even he was traveling extremely light.

How I thought it was possible (and allowed) to head into a strange and remote place, across the ocean and far away, without Catherine to steady us is beyond me. Oliver had several “I am Oliver, and I’m traveling with me, and here’s his phone number” sheets stuck in his pack and his pockets, but that was the extent of our disaster-preparedness plan. Perhaps my derring do was inherited from my father who, at exactly the same age as I was in 2009, set off with me on a bus trip across America.

Because I didn’t have a laptop with me, my only connection to the Internet was on an early-model iPod Touch, so my blogging about the trip was light; one can only tap out so much on the tiny glass keyboard before one has to go to bed. As such events that in memory loom large and formative received only scant mention in the blog. This entry from March 17, 2009, for example, references Oliver locking himself in the hotel bathroom with only a sentence or two:

The highlight of the day came at the very end when Oliver somehow locked himself in the bathroom of our apartment. After 20 minutes of trying to talk him through unlocking the door and another 20 of the helpful front desk clerk trying various things, the Košice Fire Brigade was summoned in the person of a very kind man who eventually pried open the door enough to allow Oliver to pass the key out. Oliver emerged none the worse for it (well, he may never pee again).

Here, for posterity, is the full story.

Our destination of Košice, Slovakia was selected entirely on the basis of it being cheap to fly to from London, which is where we landed on the other side of the Atlantic. I was looking for big bang for small buck, and, thanks to the now-defunct airline SkyEurope, we were able to fly London to Košice for just 128 EUR. For both of us.

It was a grueling itinerary. We flew overnight on Air Canada from Halifax to London Heathrow, took the bus to Luton, and then, after a layover, flew Luton to Košice, arriving in the evening. SkyEurope was leasing planes from Bulgarian Airlines, and the tired condition of the 737 that we flew didn’t inspire confidence. But it got us there. 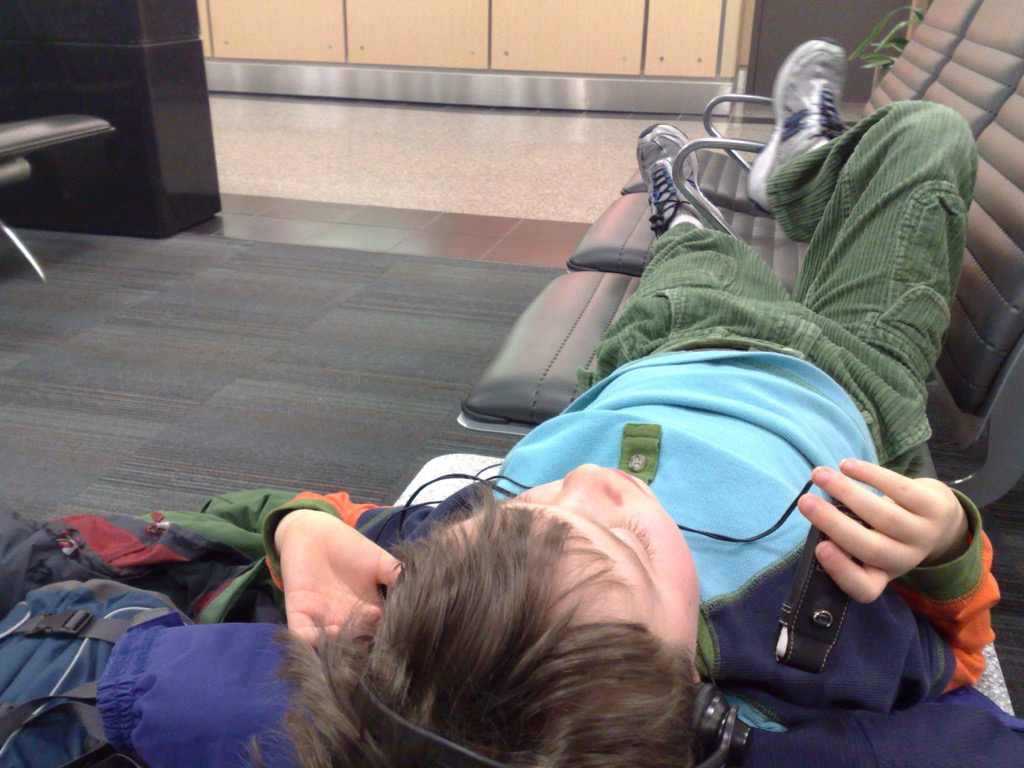 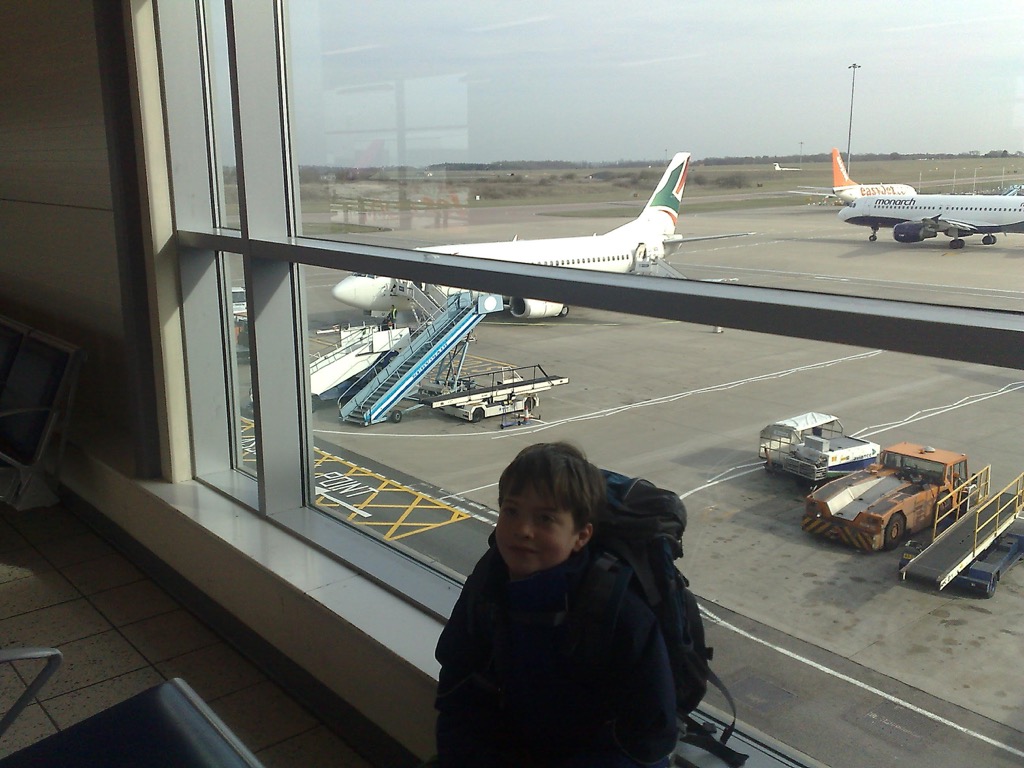 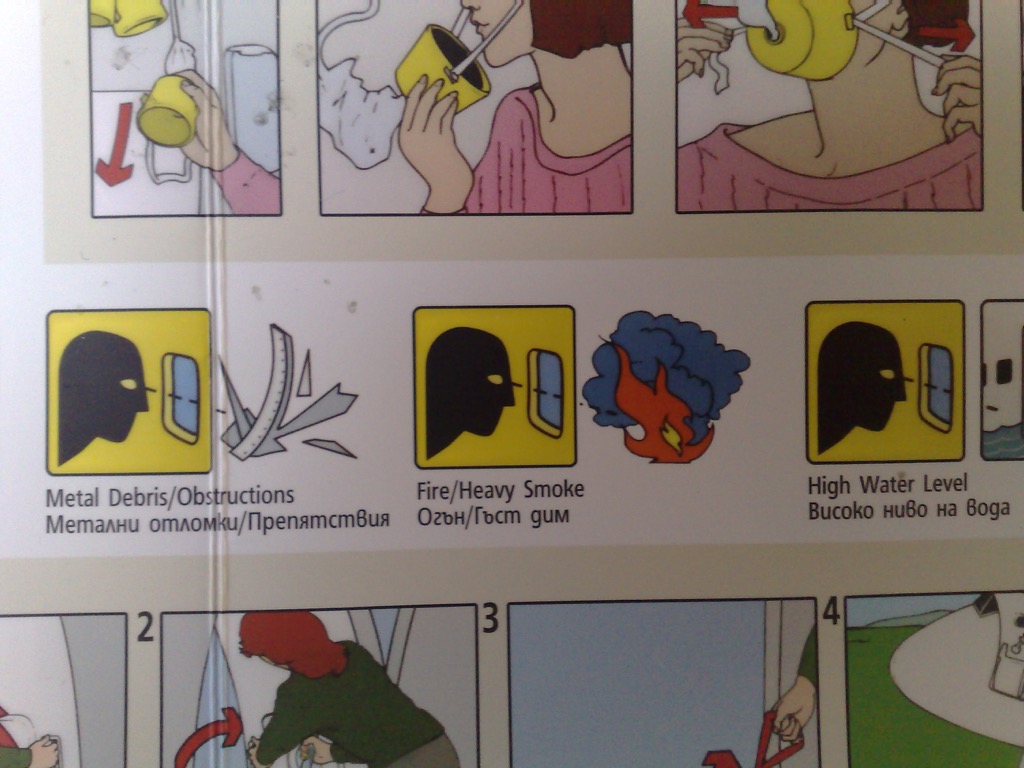 On arrival in Košice my grand plans to take the bus to our hotel fizzled in a puddle of jetlagged confusion and so we hopped in a cab and arrived at City Residence in short order (in fact I know exactly what time we arrived–8:00 p.m.–because I created a Plazes place for the hotel on arrival).

Both Oliver and I were zonked and so acting on the fringes of rationality. I was worried about having been out of touch with the home office for so long, so busied myself trying to get my iPod Touch hooked up to the hotel wifi so I could check my email for the first time in 24 hours.

In the midst of this maelstrom, Oliver asked me if it was okay to go to the washroom.

And so it wasn’t unusual when Oliver asked me, before heading into the toilet, if he should lock the door.

“Of course you should,” I said, not particularly paying attention to any possible ramifications of what saying so might mean.

I eventually got myself online (the world had not ended, I was happy to find), and was making my way through my email backlog when I realized that I hadn’t heard from Oliver in quite a while.

“Oliver, are you there?” I shouted.

What had happened is this: the City Residence hotel was located in an old, well-renovated building with heavy wooden doors, inside and out, that locked with skeleton-like keys. Upon entering the toilet, Oliver had dutifully, per my instructions, turned the key in the lock to lock the door, gone about his ablutions, and then, when he went to leave the toilet, realized that he couldn’t unlock the door. The trick was that to unlock the door required slightly more mechanical “fiddle the lock to align the key” finesse than Oliver was capable of. 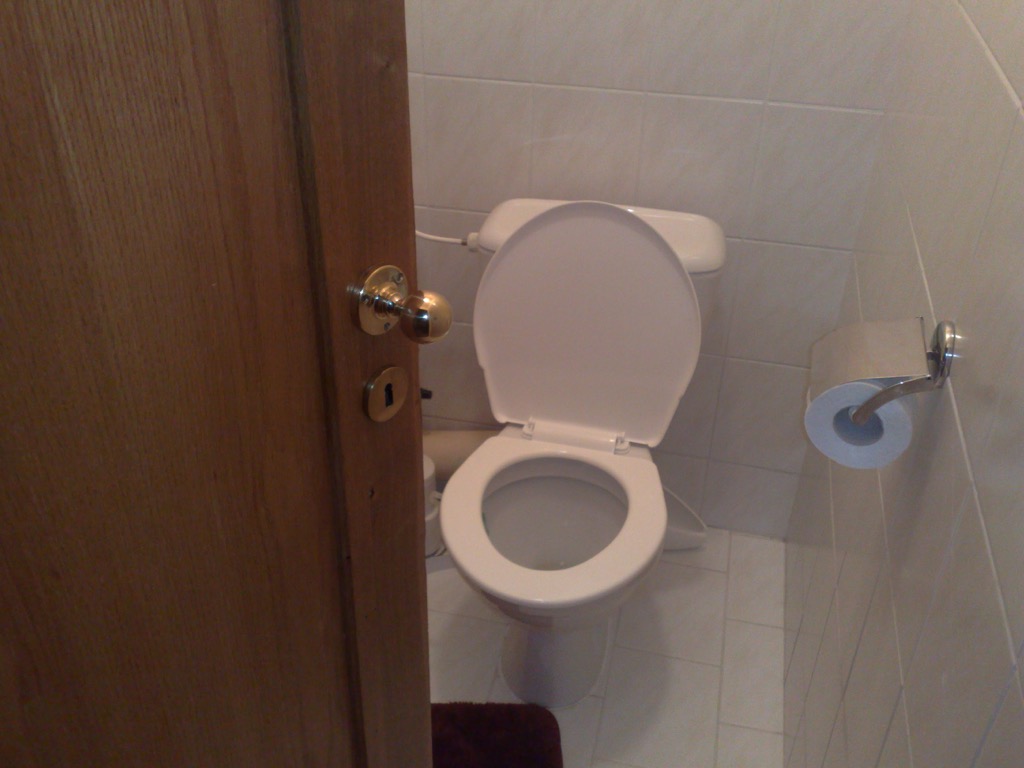 My first step in trying to rectify this was to talk him through the process of said-fiddling. To no avail (Oliver is not an oral learner, especially when locked in an Eastern European washroom).

My next step was to imagine that the front desk would likely have a spare key.

But our room didn’t have a phone, and we were on the top floor, so my only option was to leave Oliver in the locked washroom by himself and run down three flights of stairs to find the night manager.

My reaction to the enormity of that requirement was, upon further reflection, somewhat irrational: I called up Catherine on my mobile phone, apprised her of the situation, and put the phone beside the door so she could keep Oliver company during my absence. While on paper this made perfect sense, I failed to consider the trans-Atlantic panic-transference that I would cause (“Hi KD, everything’s okay, but Oliver’s locked in the bathroom and I need to leave, so could you keep him company for a while?”).

Fortunately, Catherine has a steady head, and, panic-transference or not, her disembodied presence proved helpful.

Meanwhile, I vaulted down to the lobby, found the night manager, and she quickly came back upstairs with me, carrying a medieval ring of every single key in the hotel’s collection.

None of which worked in the bathroom door in our room.

She opened up the other rooms on the floor (we were the only ones staying in the hotel, it seemed), and tried their bathroom door keys.

None of which worked in the bathroom door in our room.

We were running out of options. And Oliver, while maintaining Herculean-like cool in the face of this adversity, was starting to flag: he was flushing the toilet every minute or so to calm himself.

The night manager also was impressively cool, and she went off to call the fire brigade with hopes they could send someone over to… well, I’m not sure. Break down the door?

About 15 minutes, and a lot of toilet-flushing-calming, later, a friendly member of the Košice Fire Department arrived, tool box in hand, ready to see what he could do.

When it became apparent that breaking down the door was not an option, andthat explaining to Oliver, in Slovak, how to use the key was not an option, he motioned for me to help him haul on the bottom of the door to get it to the point where there was just enough of a gap opened up that Oliver could pass the key back through to us.

We unlocked the door, Oliver walked out, mostly unscathed.

We were all very, very happy. I took a picture of Oliver and his savior: 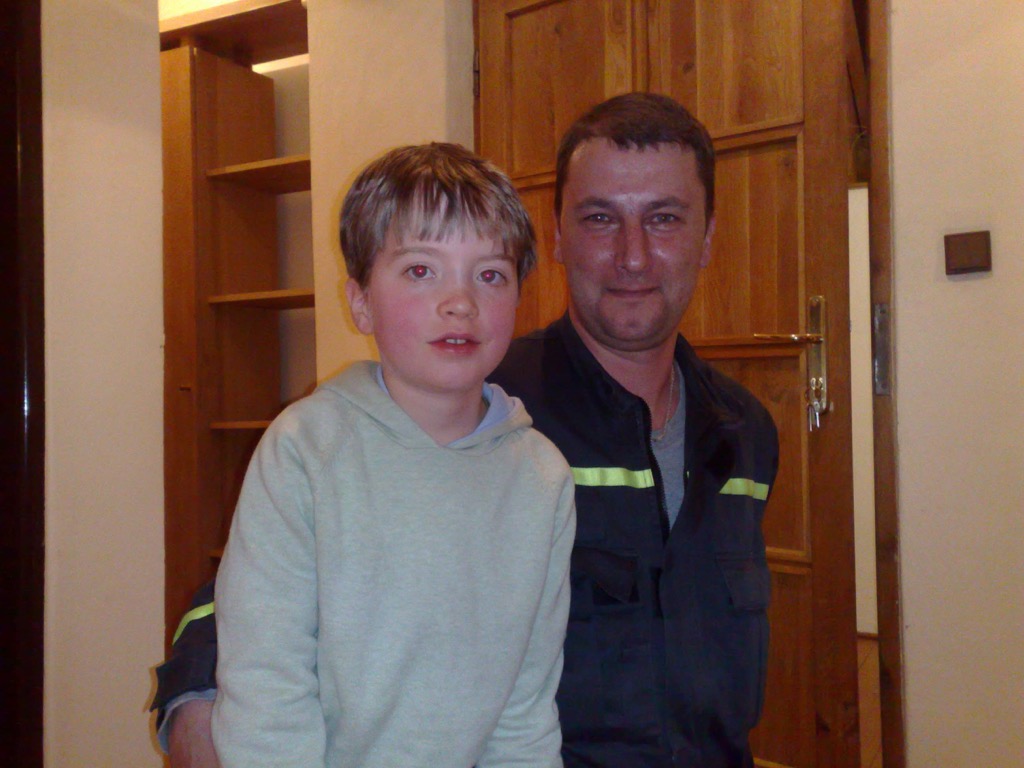 While I have no earthly concept of how long this took, the timestamp on that photo is 9:15 p.m., so I have to imagine it was at least an hour. We called Catherine back to assure her that everything was okay.

We bid the firefighter goodbye, with heartfelt thanks, thanked the night manager for working so diligently. And then we went out for pizza. It was late, but we were exhausted and very hungry.

We ended up at a Moroccan joint on the high street called Emir and wolfed down a pizza. 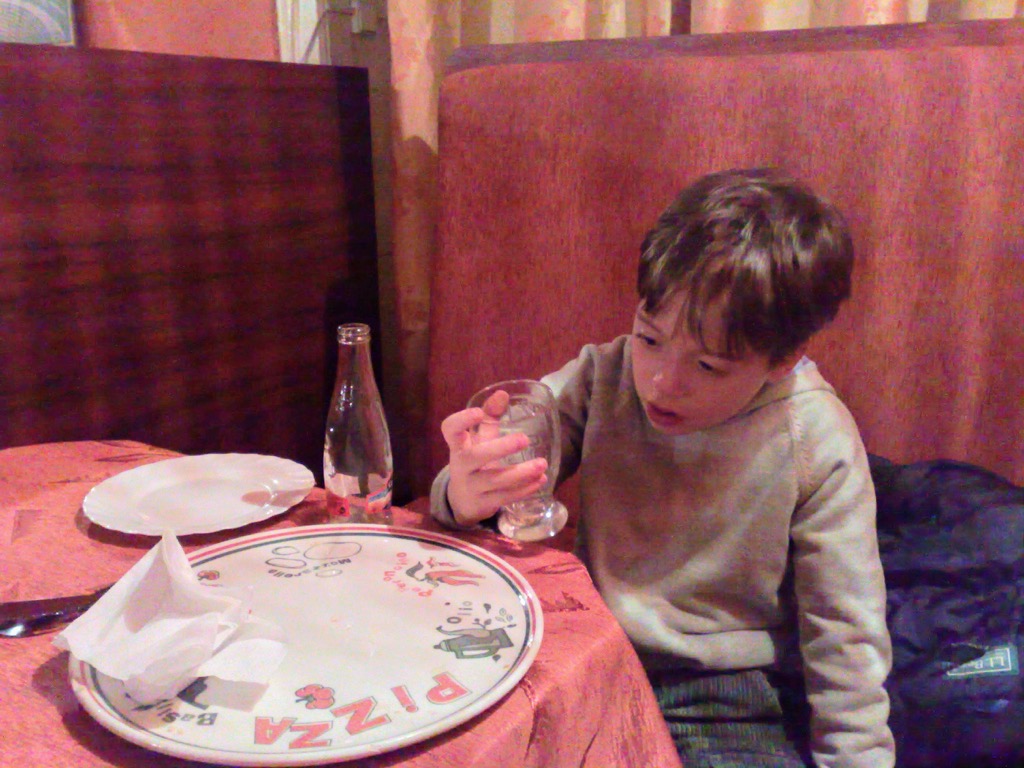 The rest of our visit to Košice, by comparison, was uneventful: we went to the ballet to see The Marriage of Figaro, visited the zoo, ate vegetarian goulash, saw the movie Marley and Me, and wandered around the city.

And then we headed west for Bratislava, Vienna, Nuremberg, Paris and London where we had many more adventures.

Along the way the young boy who looked like this: 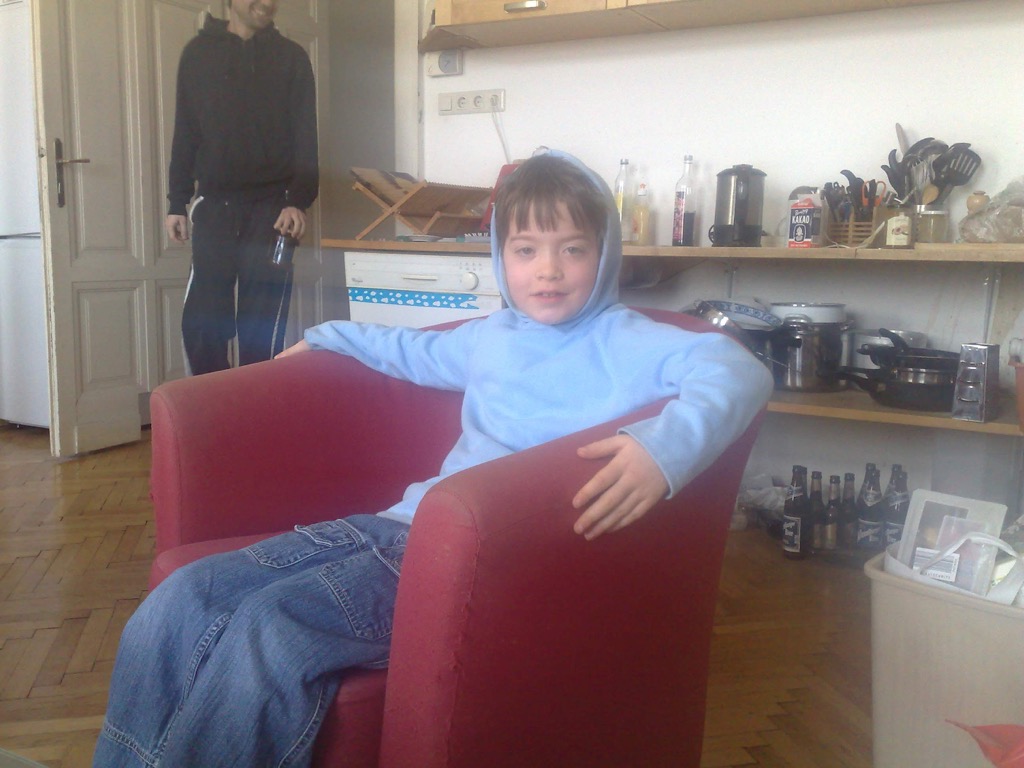 has turned into the young adult that looks like this: 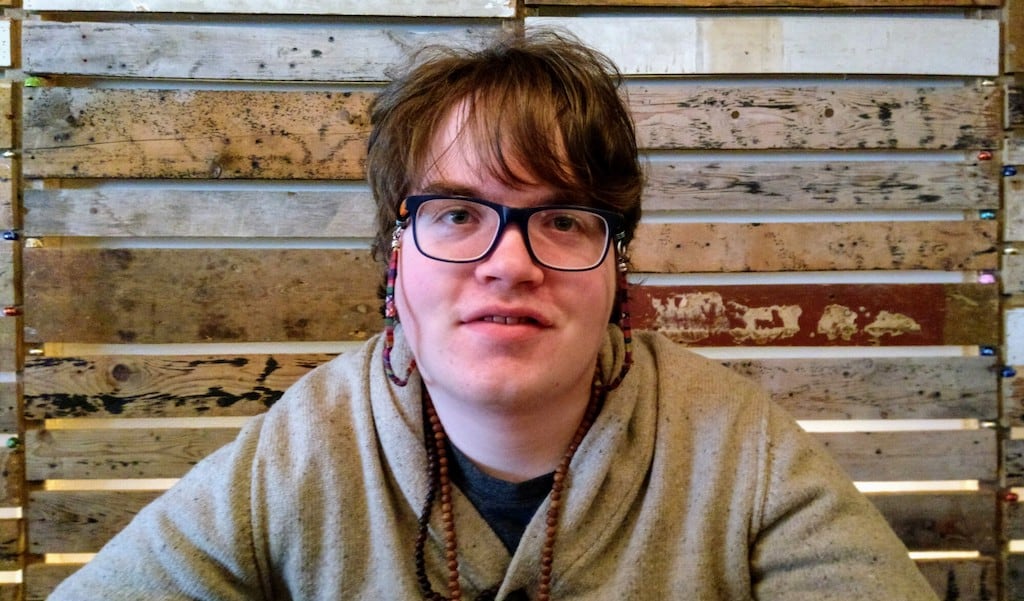 I don’t know what possessed my father, in 1980, to think that heading off into yonder with his 14 year old son for a bus-vacation was a good idea, but that trip remains one of the highlights of my childhood, and of my relationship with my father. I am happy to have had that as a template for my own parenting, as the times that Oliver and I have spent in our own yonder have similarly been some of my happiest memories of being a parent.

I think you have the basic script here for a 1920's black and white silent slapstick movie. In my head I already hear the slightly off key piano music gaining speed while you vault down the stairs to get the night manager....

What an enjoyable read! You must be a Parenting Pro now with all of those opportunities to level up.

What an enjoyable read! You must be a Parenting Pro now with all of those opportunities to level up.