As it happened, Oliver and I were still in Ontario when it was time for Ethan’s graduation from his 10 days of training, and so we hopped on th GO Train to Oakville last night to participate.

While some of the other programs at Lions Foundation Dog Guides involve a much longer training time, a lot of Ethan’s training will happen back home in Charlottetown, as that’s when his bonding with Oliver starts, so while other programs have a more “graduation”-like graduation, the Autism Assistance Dog program’s is more of a “meet and greet”: an opportunity for the dogs’ foster families (who raised them for their first year, as volunteers) to reconnect with their once-puppies and to meet the families who will take over from here.

We went along a little early so that Oliver could meet Ethan outside of the public event (as families in the program come from across Canada, it’s unusual for clients like Oliver to actually see the school and attend the event, but it’s welcomed when the opportunity presents). We walked up to Catherine’s room with Alissa, one of Ethan’s trainers, and knocked on the door. Catherine made sure Ethan was secured, and then the smelling and hi-howya-doing began; after a few minutes of this, Ethan and Oliver were comfortable enough to get close: 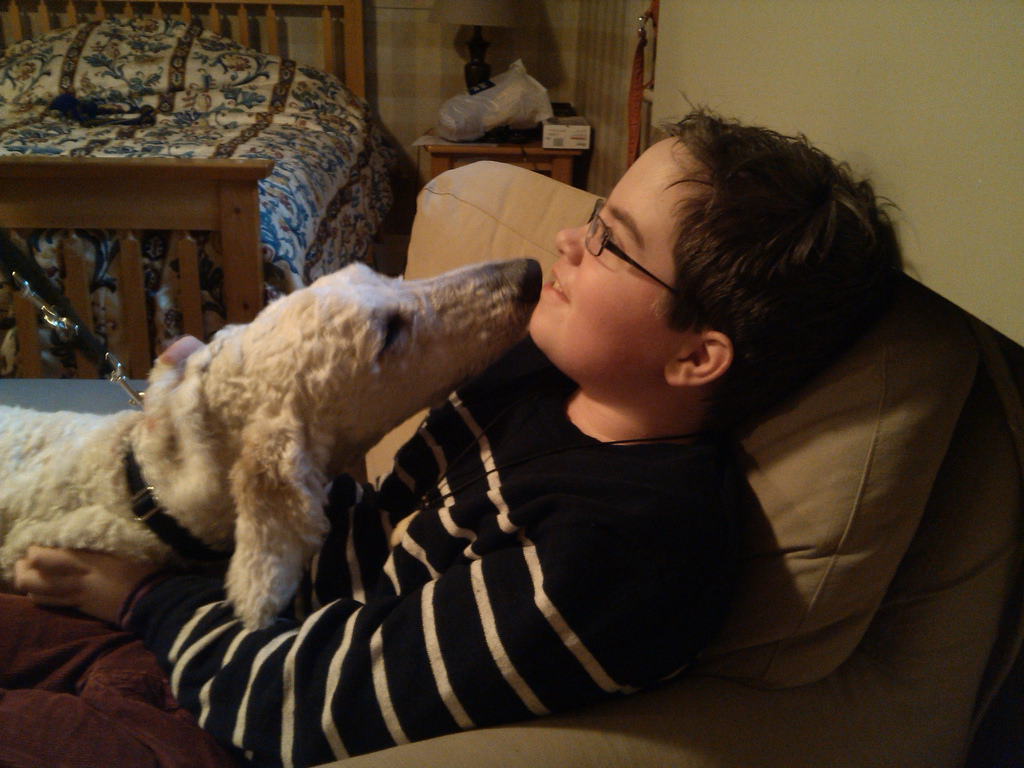 The rest of the night was, as you might expect, an emotional time. Ethan’s foster family are from Etobicoke, and Ethan was their 10th and (they say) final foster; they still care for his grandfather, though, so they’re still involved in the program. They obviously have great affection for Ethan, and it was clear that Ethan had a stressful night of divided loyalties that will take a while to work out of his system.

For my parents and brother and sister-in-law who came along too it was a rare one-time-only chance to interact with Ethan up close and personal (i.e. they were allowed to pet him); I think the feeling is that (a) it’s impossible to restrain family members and (b) it’s a sort of all-bets-are-off free-form of an evening anyway, so, okay, just this once.

By 8:30 p.m. it was time to head back to Toronto. We said our goodbyes to family and to Ethan and headed out into the rainy night.

We’re back to PEI today; Ethan and Catherine fly tomorrow morning (Ethan, as a dog guide, gets to fly inside the cabin at Catherine’s feet) and then the real process of settling Ethan into the life of our family begins.

As Ethan won’t join Oliver at school for six months to a year, he’ll be in training with Catherine and I during the day. So I’ll be the guy at Casa Mia with an adorable red-vested poodle that you can’t pet sitting at his feet.