When we last left the trail of our summer’s-end trip to Europe we were in Malmö, Sweden, preparing to head to Berlin.

On Monday morning we woke up to a dreary day in Malmö, with the threat of rain just over the horizon. We packed up the Swedish operation, had the last breakfast in our Airbnb (a lovely flat should you ever find yourself looking for lodging in the city). With the impending rain, and a wish to exercise every option available to destress the travel day, I ordered us up an Uber (only my third ever) and a friendly cab driver arrived 5 minutes later for the quick run to the Triangeln train station. A few minutes later we were whisked away on the Øresundståg across to Copenhagen.

As we were traveling first class (which was insignificantly more expensive than second class), upon arrival in Copenhagen we were able to retire to the utilitarian DSB lounge overlooking the main station floor; it was a busy, chaotic morning in the station, and while the lounge was absent canapés and butlers, the quiet and remove were worth every penny.

At 12:52 we boarded the first of three trains for the day: the first run was from Copenhagen to Fredericia, a main railway junction in the western Denmark area of Jutland in; from there it was a change of trains and south to Hamburg and in Hamburg we had a short 30 minute layover–just enough time to grab a pineapple popsicle from the DB lounge–before catching the final train, to Berlin. 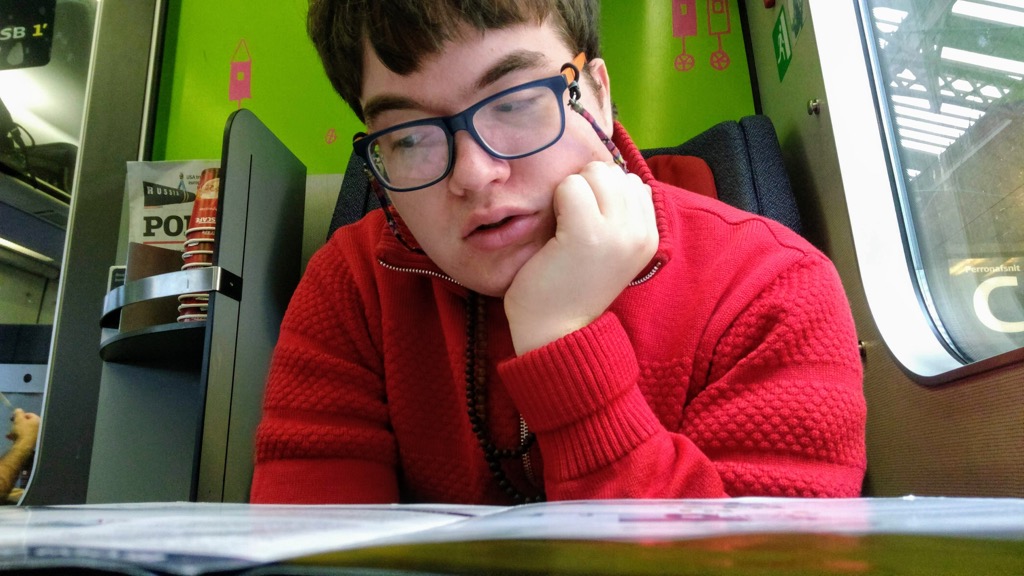 The train pulled into the main Berlin rail station, the Berlin Hauptbahnhof, at 8:30 p.m. We quickly hopped on the S-Bahn to Ostbahnhof, an 8 minute trip. From there we walked to the A&O Hostel on Köpenicker Str. where we arrived just before 9:00 p.m. We checked in, dumped our bags in our room, and walked at a brisk pace to Freiluftkino Kreuzberg, just 500 metres up Adalbertstraße. We bought tickets for The Shape of Water, and took our seats. At 9:15 p.m. Just as the show started. It was the travel equivalent of a perfect game.

Freiluftkino Kreuzberg is one of my favourite places on Earth, period. And it’s certainly my absolutely most favourite place to see films. It’s tucked into a courtyard beside Kunstquartier Bethanien (which also houses Druckwerkstatt, where I spent many happy Tuesdays printing back in 2011). The films are shown outdoors, on a large screen; seating is either in garden chairs or loungers. There is popcorn and German beer. And the scent of pot smoke in the air. And bats and birds flying around. On Monday night it was windy and threatening rain, and thus the perfect night to see a film about a watery monster falling in love.

It was the best way imaginable to start a trip to Berlin.

We woke up on Tuesday morning just a little exhausted from travel (and just a little more from the granite beds at the A&O). After the uninspiring but helpful hostel breakfast we headed over to Companion Coffee to seek an antidote to the hostel coffee (made out of the same materials as the beds, from the taste).

We then hopped on the U-Bahn into Mitte for lunch with my friend Igor, tucking into MUJI for some emergency stationery browsing for a few minutes before our appointment meeting time.

We enjoyed a very pleasant lunch with Igor and his office mate at Made in China on Schönhauser Allee, stopping for (excellent) ice cream at Cuore di Vetro on the way back. We bid our lunchmates goodbye and headed to do your read me?!, the magazine shop of magazine shops, then to R.S.V.P., the stationery store on Mulackstraße that has doubled in size since I was first there in 2011, spreading to a second location across the street. At R.S.V.P. I acquired a lovely Kaweco AL Sport fountain pen that’s just the right size for carrying around all the time, and some cord made from an exotic-sounding material called baumwolle that I later realized is simply cotton (“tree” + “wool”).

With a first round of stationery shopping out of the way, we retired to Hackbarth’s where we met my old friend James, a Canadian long a Berliner, as I’ve written before, a sharer of a childhood barber, and always someone I enjoy catching up with enormously. 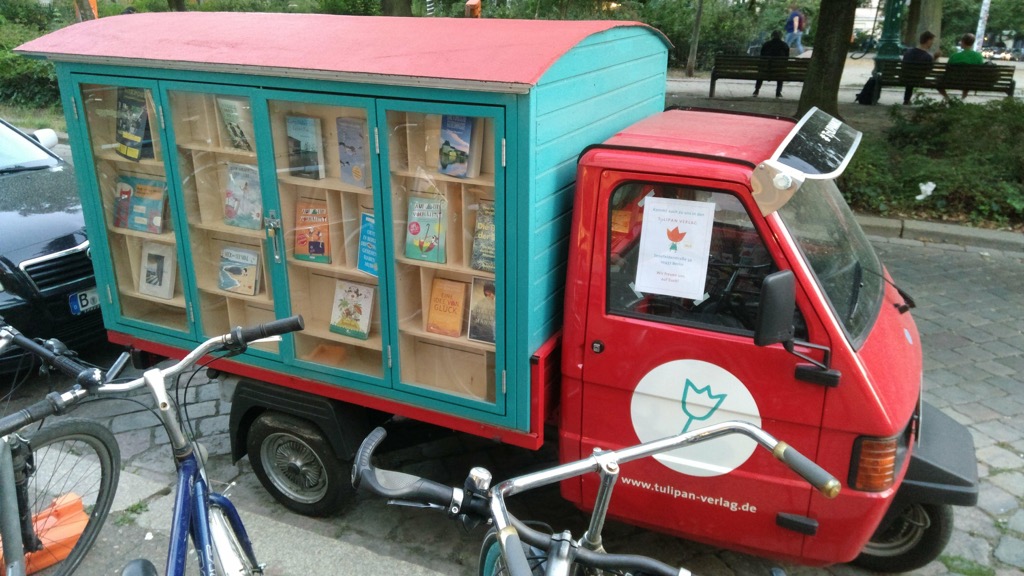 My friend Morgan came along after work to join us for a drink (you’ll remember him from such episodes as The One Where I Blow Up the Car and I Am a Connection Machine) and afterwards we moved on to Salt n Bone for supper, where we were later joined by our friend Tiffany.

We rolled in to the A&O just after 10:30, happy to have spent a day with friends.

On Wednesday morning we subjected ourselves to the A&O breakfast again, but avoided the coffee in favour of an extended morning coffee break with friend Peter, whose office is as well-located an office as I’ve ever seen, embedded as it us in the same complex as Modulor, the world’s greatest stationery superstore. After catching up with Peter we spent almost 2 hours roaming the aisles of Modulor, finding enough unique items of interest to fill a small shipping box; so a trip to the post office around the corner was our next stop (Modulor helpfully has a packing and wrapping station, well-equipped with scissors, tape, kraft paper and string that made this much easier). 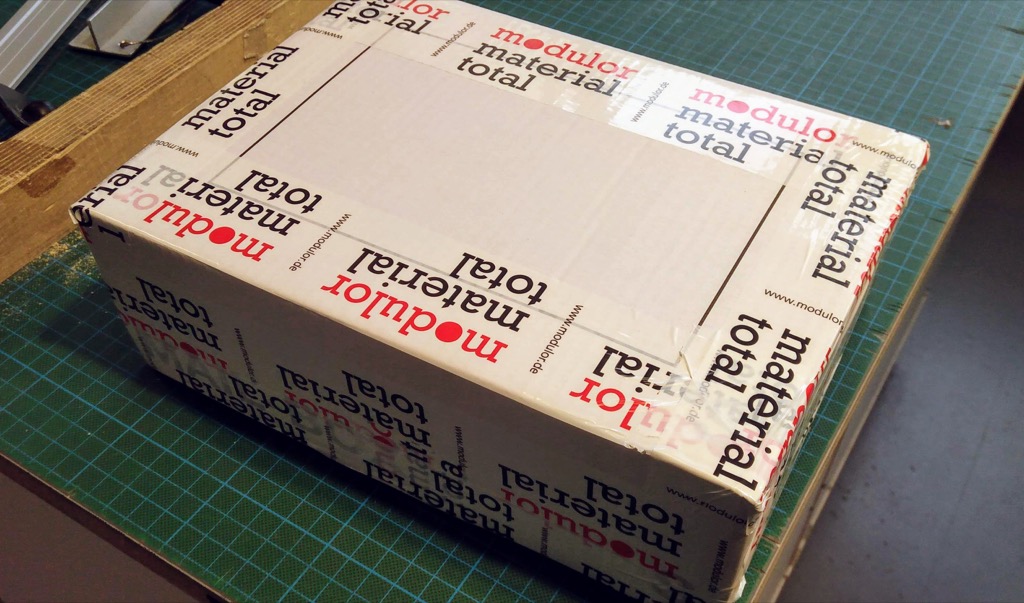 For lunch we walked across the street from Modulor to Prinzessinnengarten and shared an meal of creamed chickpeas with cucumbers over rice and couscous while perched on a rattletrap table made out of tree stumps nestled between forest and garden. After lunch we toured the site, and stopped to make some sketches. 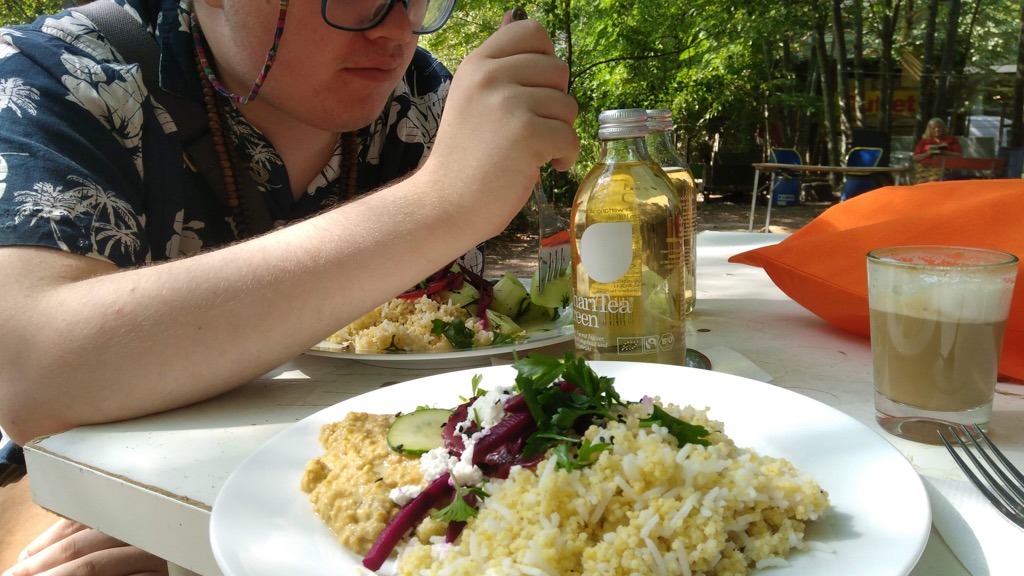 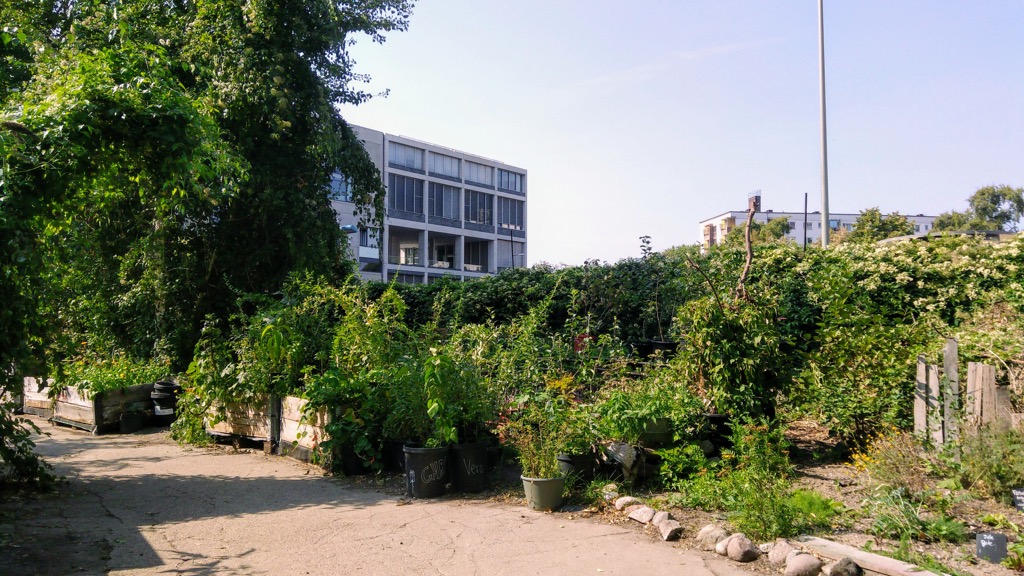 From the Moritzplatz U-Bahn that opens on to both Modulor and Prinzessinnengarten we rode into West Berlin to go to Hamburger Bahnhof, an art gallery in a former train station where we’d never been before, despite many visits to the city. We were lucky to find three intriguing exhibitions in place: a room full of works by Joseph Beuys, Andy Warhol, Robert Rauschenberg and Cy Twombly organized with “thought bubbles” beside each containing a collage of influencing imagery, Hello World, in the upper gallery, “a critical inquiry into the collection of the Nationalgalerie and its predominantly Western focus,” and, on the other end of the building, a monumental collection of installations by Qin Yufen. 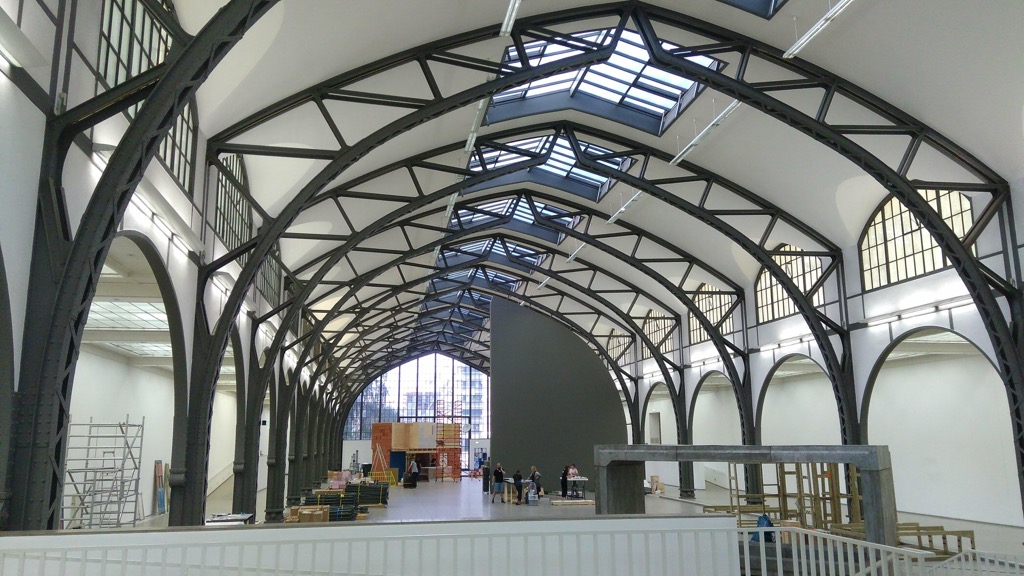 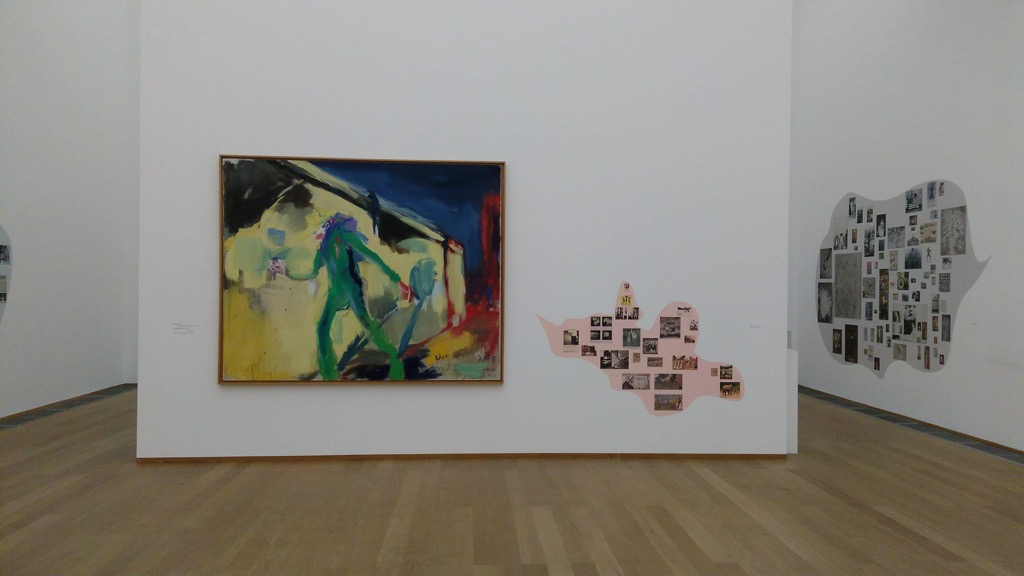 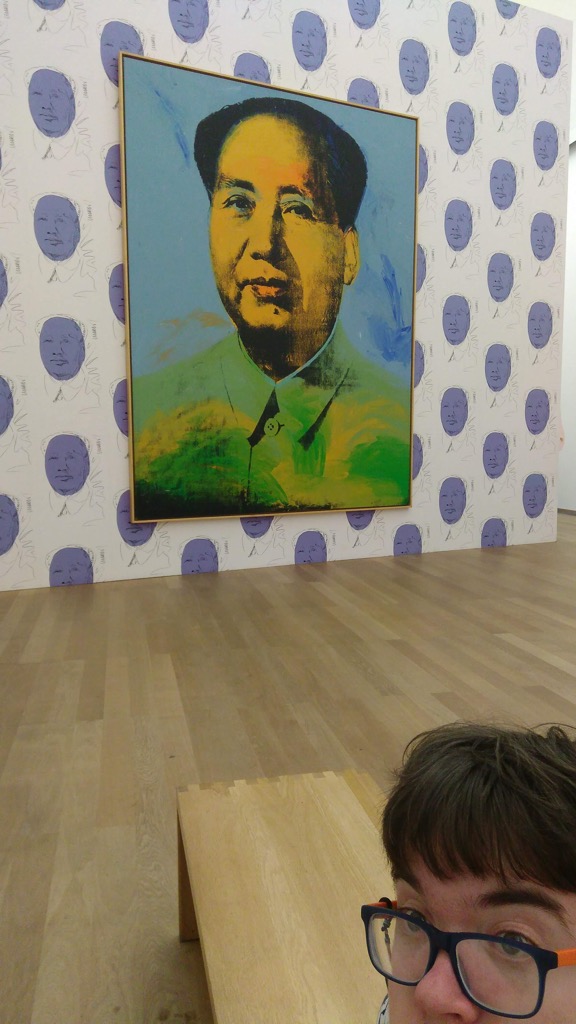 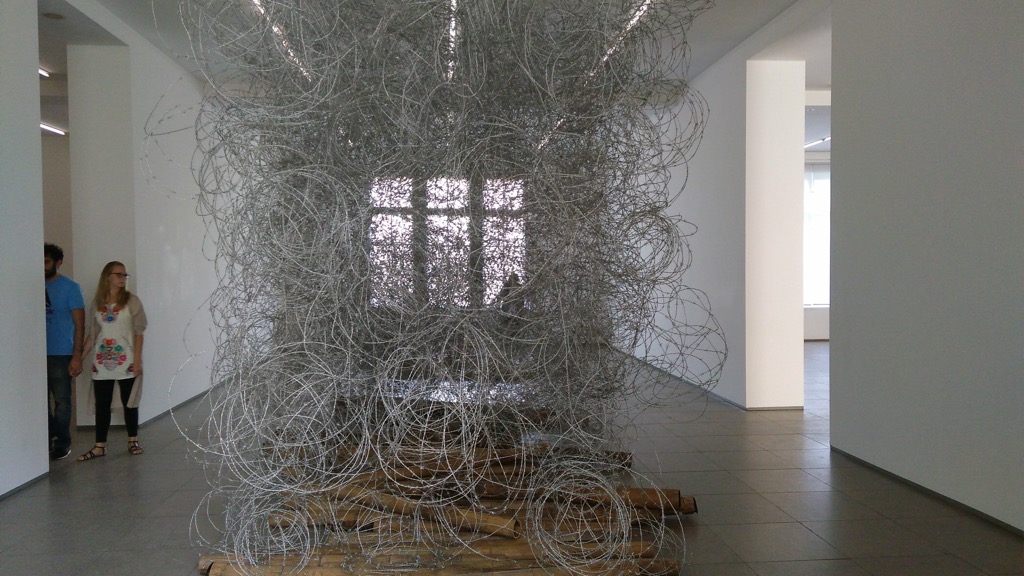 Once we’d toured the gallery we found ourselves tired and thirsty and I debated whether we should simply grab a coffee at the pleasant looking canal-side café attached to the gallery, or forge onward into West Berlin for something possibly more interesting. I channeled Catherine in this regard, and followed what I knew would be her advice to take the easy coffee at hand; this turned out to be exactly the right decision, and we emerged ready for the final activity of the day.

This final activity was a supper, thoughtfully organized by the aforementioned Morgan, at a Shaniu’s House of Noodles on Pariser Str. Morgan is a member of a ragtag group that, over the winter, gets together for a weekly TV watch-and-potluck; he called together a special summer session to visit Shaniu’s, and we were invited to join. The company was a diverse mix of people connected by myriad threads, all interesting; the food was transcendent, with several flavours that were completely new to me.

We arrived at the hostel at an “early” 10:00 p.m. and fell quickly to sleep after a quick round of preemptive packing.

Thursday morning we woke up at the unusually early hour of 7:00 a.m., ready to head east to the Netherlands. 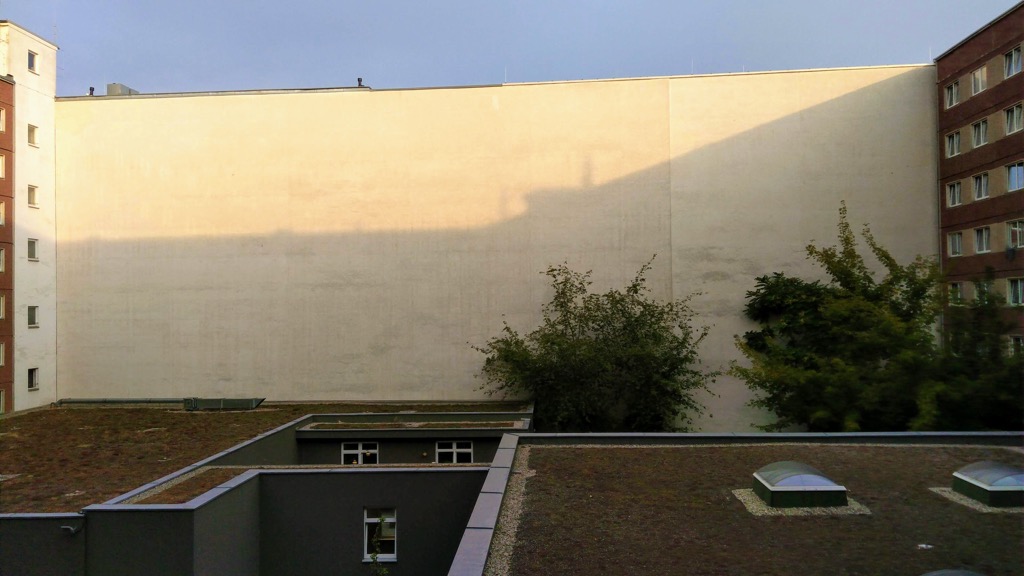 In total we were in Berlin for a little more than 48 hours, and we managed to do a lot of visiting in that short time, and to visit my favourite haunts. Oliver was very, very generous and patient with me, indulging my stationery obsession and abiding many conversations with friends.

Peter - I have fond memories of the Freiluftkino Kreuzberg on our visit back in 2016. It is a lovely oasis in Berlin. The walk back to the hotel was less oasis-like.

Fortunately our hostel was a walk in the other direction this time, and no ill befell us.