I celebrated Catherine’s 30th, 40th, and 50th birthdays with her; today would have been her 57th.

Her 30th was momentous: we were young and wild and free, and had landed on Prince Edward Island just a few months earlier. I have little recollection of what we did that day, other than that it was warm and sunny and we were very very happy.

Her 40th went sideways: she was in a funk, Oliver (age 2) and I tried our best to make it epic, but failed.

Her 50th was much better: we booked a table at The Dunes, about which I wrote, in part:

By way of celebrating Catherine’s birthday we headed out to The Dunes for supper midweek and had what turned out to be an excellent meal. The highlight was an appetizer they call “The Grazing,” which was, as it turned out, almost enough to feed all three of us for the night: sausage, olives, spiced almonds, salad, roasted onion jam, fresh bread and more. It was the kind of dish that makes Catherine swoon, so, only by coincidence and not by plan, the perfect dish to celebrate her birthday.

There were, of course, other birthdays in there: I celebrated 28 of them with her, maybe 29 if you factor in the birthday going on next door while I was but her shy next-door neighbour in Peterborough. I wrote here about her birthday in 2006, 2010, and 2016. Because late June was often time to travel, more than a few of them were celebrated while en route to some exotic foreign locale; in 2014–The Last Great Summer–we were en route to Germany for our caravanning vacation, and that wasn’t the only time that happened. To the point where, just now, as I write this, I received a text from Oliver:

Catherine was never averse to aging, and generally greeted her birthday with enthusiasm, but she never wanted to be the centre of attention, and there was a standing order, from the time we first met, that there should be No Surprise Parties. I followed that order strictly, and tried to work magic, as best I could, in other ways.

Tonight Oliver and I will go to Richard’s for fish & chips, and will think of her. By happenstance I had a grief support group meeting this afternoon, and halfway through, talking about “what rituals will you uphold?”, I realized that every single time we’d ever been to Richard’s as a family, I’d go and get a table with Oliver, and Catherine would order. Tonight I will have to order.

Later in the evening we’ll gather with family on Zoom to remember Catherine–it’s one of a punishing cavalcade of family Zooms that Oliver has arranged for this week of memorializations.

I answer the question “how are you and Oliver doing?” a lot these days. “We’re okay,” I generally reply. And, most of the time, that’s honest: it’s been five months and two days since Catherine died, and we’re slowly starting to find our sea legs. I am not sad all the time (but I am sad some of the time). We made it through the worst of the lockdown together and emerged unscathed. We planted a tomato and some peppers. We’re about to plant some patchouli in Catherine’s honour. We eat. We sleep. We do the laundry. Some nights I look over at the rocking chair and am surprised to not see Catherine there, and some nights the loneliness reaches out to bite me something fierce. But most nights I’m okay. I’ve learned a lot about grief, most notably that it’s largely indescribable in words, and that it’s different from being sad (which is why it’s not simply called “the sadness”).

I’m starting to tentatively hold out hope that maybe 2014 was not, in fact, The Last Great Summer. Tentatively.

Wherever this June 18th finds you, please take a moment to raise a glass to Catherine, who is, no doubt, sitting on a stool at God’s microbrewery, enjoying tapas, and wondering why we’re making such a fuss about her. 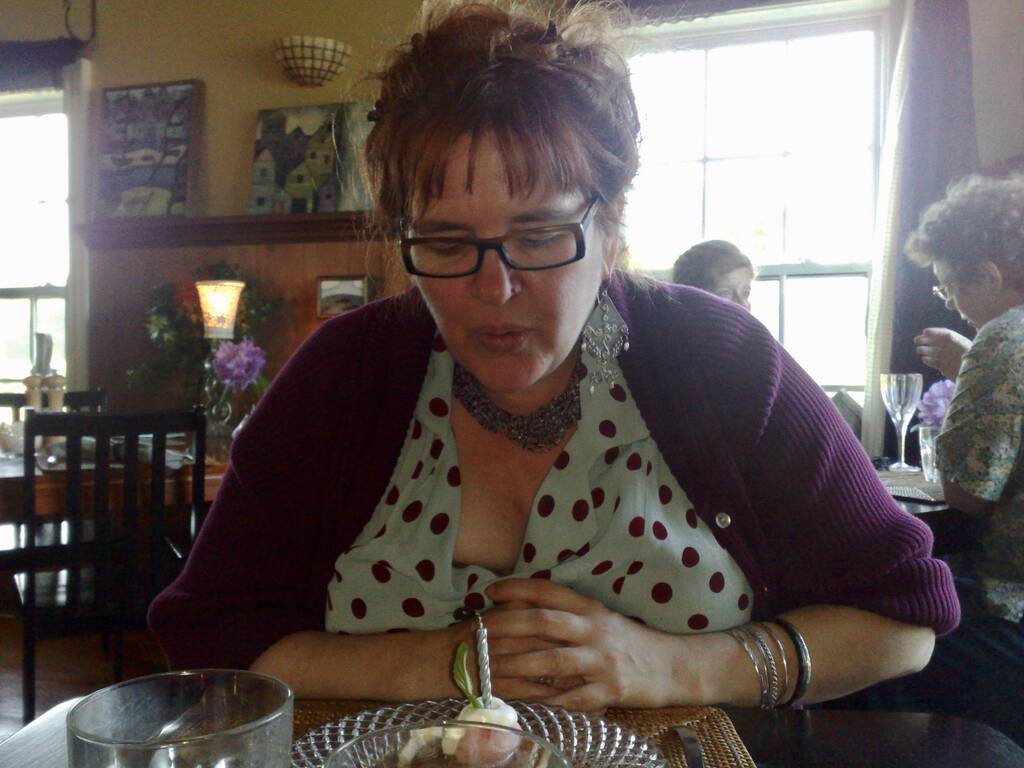 Richard’s was great, and our timing was impeccable: we arrived with one other group in front of us in line; by the time we left the line stretched out down the parking lot.

On the way home we stopped at Canadian Tire and bought Catherine (well, ourselves) an umbrella for the patio.

On the cake front I defrosted the gingerbread cake I’d had in the freezer since making it from my grandmother’s recipe last year; Catherine had a piece of it before I froze the rest, so she was here, kind of.

We were joined by brother Mike, sister-in-law Karen, my mother Frances, and Catherine’s mother Marina, all on Zoom, for Happy Birthday and a chat.

As birthdays-of-departed-spouses go, it was a pretty good day.

That was beautiful. I couldn't sleep. It's 4 am. I awoke and did what one is not supposed to do (read emails). But that was worth every word. You've got it so right. She's probably wondering why you're bothering ... and giggling as she says it. Viva Catherine!

Was it a birthday when she was pregnant and she asked you to take her to different restaurants all day for all of her different cravings? That seemed like one of her favourite days.

I loved the grazing plate at The Dunes, too, the perfect way to eat, a little of this and a little of that. I ended up having a grazing supper at home tonight and thought of Catherine.

Today was/is shaping up to be a hectic day. We are packing to move (new house closing today), a week worth of miscellaneous things piled up in the wake of me finishing my temporary job of truck driver, daughter #2 is being married tomorrow and there are some logistical things to that (including refreshing my motor coach operation skills), Father's Day prep - not for me but for my father's event, and regular work. Your posts today, like so many times before, is like a soothing tonic, slowing my heart rate yet nourishing my heart. Your words easily convey the love you have for Catherine.

I love reading about all her birthday meals. I'm so glad Oliver made sure there was a celebratory cake.