The thing you don’t realize about The Amazing Race is that while it might look simple to, say, “catch the bus to the heart of Rome, find a pushcart vendor selling cashews, buy a bag, and deliver it to the Vatican Library,” doing this while jet-lagged, brain-addled and on only a few hours of sleep is an entirely different prospect.

The prize at the end of our own amazing race that began Tuesday was not a Polaris Sea-Doo or an amazing trip for two to Cancun, but rather supper on the banks of the Rhine.

But I am getting ahead of myself.

We left Charlottetown at 1:00 p.m. on Tuesday and drove to Halifax, making good time and arriving 3 hours in advance of our flight. We parked the car at the Hilton, caught the shuttle to the airport, and found the Condor check-in desk.

Where we were told that our flight was delayed by two hours.

Condor had record of Ethan, made no fuss about his traveling in the cabin with us, and the only requirement was for us to sign a waiver, the contents of which I cannot recall now (perhaps “if your dog eats another passenger, it’s not on us” or something like that?).

We occupied our extra time with eating, drinking (at the pleasant-respite-from-the-airport-feeling Alt Hotel lobby cafeteria) and making merry in the nicely-appointed dog area (under the bridge to the parking lot: it really is a wonderful feature of the airport).

The plane boarded around 10:30 p.m. and, what with Ethan being in our charge, we got super-deluxe, take-the-back-way-in, board-even-before-the-children boarding privileges.  What’s more, the purser, on seeing us trying to squeeze into the almost-no-room-for-Ethan economy class seats immediately upgraded us to “premium” economy. He did this quickly, and in an “of course we will do this” manner that made me fall in love with him instantly. And premium economy, by compare, was dreamy: Oliver and Ethan and I got three middle seats to ourself, so Ethan got a full underseat to call his own, and Catherine got the entire row behind us to herself. We even got one of the swanky “amenities kits” that I last remember receiving on a BOAC flight in 1972.

Ethan weathered the trans-Atlantic flight in fine form: he did what he was trained to do, which is to gamely and calmly stand by. He neither complained nor barked nor made a fuss nor tried to climb up on the seats nor did he eat any of the other passengers. He was a dream-dog.

We arrived in Frankfurt on-time and, all things considered, in pretty high spirits. We found our way to the next terminal over, found the Lufthansa check-in desk, got a boarding pass for Oliver which, mysteriously, they had been unable to print in Halifax, and addressed the “oh, he’s a service dog riding with you in the cabin!?” nature of Lufthansa’s electronic non-record of Ethan (it was handled quickly and efficiently and we were re-seated three-abreast rather than in different parts of the plane).

By 2:00 p.m. we were in Düsseldorf Airport looking for a place for Ethan, who had gamely held his bladder for the entire trip from Halifax, to pee. Patch of grass beside the parking lot located there was, as expected, much peeing to be had.

We flagged a taxi, handed over the the address of the DRM camper rental outfit south of town, and then enjoyed the little tour of the edges of the city, bearing witness to the devastation wrecked on the city a few weeks ago by a suddenly-arising “super cell” storm that uprooted what appeared to be every second tree.

Picking up the camper was easy: handed over driver’s license and credit card, signed a few forms, received a walk-around and guide to using the VW camper’s complex system of push buttons (raise the pop-up, turn on and off the fridge, etc.) We filled up the water tank. I figured out how not to stall the camper in 1st gear. And we were off.

On our own amazing race.

Goal: buy dog food, find a SIM card for my phone, get groceries, find our campsite.

The challenge: jetlag setting in, an unfamiliar vehicle, no maps nor GPS (a chicken-and-egg problem involving the SIM card), streets crowded with downed trees.

The dog food was easy: there was a Fressnapf outlet only a block away from DRM.

Dogfood in hand, we headed off to find the “real,-” (yes, that’s how it’s set) store that, the web told me, would be the get-everything-else-you-need store. Miracle of miracles, following only the rough “Turn right on Fredrichsomething” notes I’d taken in the airport the night before, we found our way.

We bought groceries, negotiated a thicket of mobile operator offerings with a helpful (though non-English-speaking) clerk, and even remembered to buy towels and get a Benadryl-like cream from the pharmacy across the hall.

Back into the van and the degree of difficulty went to 11: the simple-seeming directions I’d written down for this leg of the trip – grocery store to campsite – turned out to be some sort of abbreviated list of street names that the Google Maps directions app gave me rather than a detailed route. So what turned out to be a 30 km journey on all manner of different roads and tunnels boiled down to a list of streets and tunnels only loosely connected.

But wait, you might be saying, I had a SIM card now, and thus should have had a GPS to guide me.

Except that the one downside of the “all you can eat high-speed data for a month” SIM I purchased from Blau was that you had to be online to register and activate it. And so until I could get online some other way, I couldn’t get online from the van.

My ace in the hole was parsing Rheinbrücke, one of the random street names Google gave me, into “Rhein bridge.” I knew where the Rhine was, because my friend Pedro lives near it, and he also lives near the big highly-visible tower in the city, so putting all that together I came up with a plan: head for the tower, find the river, drive over it, and hope for the best.

We got close enough to where we needed to go that the final street names on the list started to fade into view, and having a general notion from the name of the campsite – Rheincamping – that it too was on the river, we found our way there.

The “booking” I thought I’d made the night before turned out to have been only an “enquiry”; fortunately, because we were only staying a single night, they had a site for us, right on the banks of the river.

With hardcore addling now setting in we nonetheless somehow managed to: find the site, put up the pop-up, make supper, figure out the complex toilet-entry code system, make up the beds, feed and water Ethan, and then, gloriously, sleep.

Our amazing race, or at least that little part of it, was over. 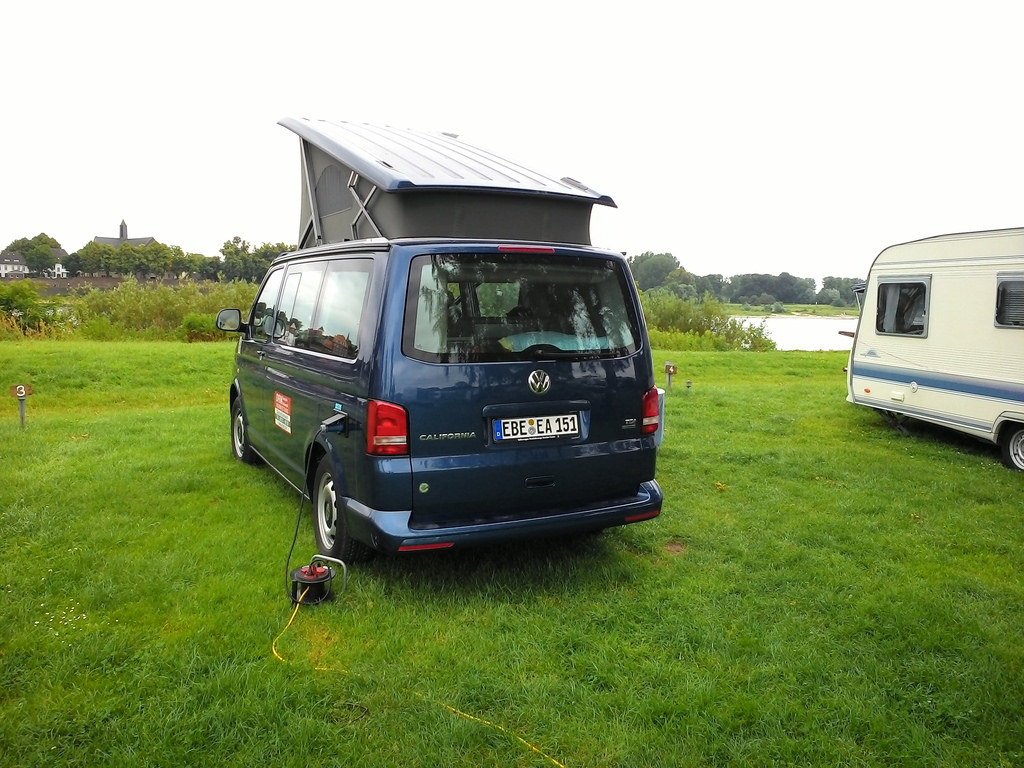 The next morning we woke up to fresh air, a constant panorama of river boats, and the fog of travel lifted – mostly – from our heads.