If you read my tale of riding my bicycle to the airport you may have made note of the apparent absurdity of doing so only to get on an airplane, which is not at all a low-carbon-emitting kind of thing to do.

But there was method to my madness.

Two or three times a year I travel from my home in Charlottetown to Dublin, New Hampshire to spend a week working with colleagues at Yankee Publishing. I’ve used a variety of ways of making this trip over the years, but most often I fly from Charlottetown to Halifax or Montreal, and then from there to Boston, rent a car, and drive the 90 minutes northwest to southern New Hampshire.

Earlier this summer, when I was making plans to again take this trip this September, I was talking to a friend about Green Party of Canada leader Elizabeth May; she, whenever possible, takes the train rather than flying (not an easy thing to do when running a national political operation).

That got me thinking that maybe I should take the train this time. There are no rail connections from Atlantic Canada into the northeastern U.S., but there is an overnight train from Moncton to Montreal, and a connecting bus from Charlottetown to Moncton.

When I discovered that I could rent a battery-electric vehicle in Montreal and drive from there to New Hampshire, and spend less doing so than the cost of renting a gasoline-powered car in Boston for the same period, I was sold.

I booked a bus-train journey from Charlottetown to Montreal, and reserved a Chevy Bolt from Montreal for the week.

The cost for the return fare, Maritime Bus from Charlottetown to Moncton and VIA Rail from Moncton to Montreal, was $1,148 and the journey would start on Friday at 1:00 p.m. and I’d arrive Montreal on Saturday at 10:00 a.m., returning the following Sunday, leaving Montreal at 7:00 p.m. and arriving Charlottetown on Monday 5:05 p.m., for a total travel time of 43 hours.

I decided to check my work.

I was going to be using this trip as an example of how long-distance travel without flying is possible and I wanted to make sure that the carbon emissions numbers added up. So I emailed the VIA Rail press office a query:

I’m a blogger who’s booked a bus-train combination from Charlottetown to Montreal in September, in part to be able to write about the difference in carbon footprint from taking the train vs. flying.

You have a helpful carbon calculator on your website, but it doesn’t include The Ocean, and so I’m wondering if you can fill in this gap for me directly: I have booked the Maritime Bus from Charlottetown to Moncton return, and room-for-1 on The Ocean return.

A week later VIA Rail emailed me the answer:

The total greenhouse gas emissions for a one-way trip on the Ocean between Moncton to Montreal is: 1,053.71 Kg of CO2e.

That seemed like an awful lot of carbon emitting for what I was holding out hope for as low-carbon travel: 2 tonnes of CO2e is an eighth of what our house emits in an entire year according to our EnerGuide assessment.

I compared the figure to the purported carbon emissions from flying the same Moncton to Montreal route, and they ranged from 90 kg to 130 kg for the one-way trip. About ten times lower than taking the train.

Surely VIA Rail’s numbers must be off, I reasoned. Or maybe it was the fact that I’d booked a bedroom rather than a coach seat. So I checked, with a follow-up to VIA:

As a supplementary, then, can you tell me what the CO2e figure would be if, rather than traveling in a bedroom I was to travel in a regular economy seat?

Whether you are travelling in a bedroom or in a regular economy seat, the greenhouse gas emissions are the same.

Having reached the edge of my ability to parse this, I looked for help from energy and transportation experts, an uncommon number of whom appeared to simply assume that VIA’s numbers couldn’t possibly be true, and suggest that I take the train regardless.

The most valuable advice I received came from Ryan M. Katz-Rosene from the University of Ottawa, who I found via a CBC story about the carbon emissions from air travel.

Ryan wasn’t surprised by VIA’s number, crediting the high carbon emissions to a combination of a long, meandering route, low occupancy (due, in part, to the low passenger-to-car ratio in sleeping cars), and the use of inefficient diesel locomotives. He did question that VIA uses the same emissions-per-passenger figure for both coach and sleeper seats; I wondered about this as well.

Ultimately he was forced to conclude:

When all is said and done, it does appear to be the case that in this particular instance flying is less carbon intensive than taking the train.

He added an important caveat, however:

VIA has tremendous potential for improvement. So, in a way, you could still justify taking the train in principle on the premise that you want to financially support a Crown corporation which can really use those funds to dramatically improve its service (and thus increase occupancies, and reduce emissions)… but my take is that, given the current situation, best response (if you absolutely must take one of those two options) is to fly and then write a letter to your MP pointing out how unacceptable the whole situation is!

Much of the political conversation about passenger rail in Canada concerns high speed rail. For long distance routes like Halifax to Montreal speed is a secondary concern, as the distance means that it’s always going to be a long run; this means that we can turn ourselves to high efficiency rail, both the efficiency of the rolling stock and of the logistics of actually taking the train.

The notion that a Prince Edward Islander might choose to take the train to Montreal, for example, seems to occupy roughly 0% of VIA Rail’s marketing efforts. There is no long-term parking at the Sackville VIA Rail station (the closest one to PEI). Bus connections to and from the Moncton VIA station on Maritime Bus aren’t guaranteed: if the train is late and the bus leaves, you’re out of luck. It is by no means part of an integrated transportation network for Islanders. I imagine that’s part of the “tremendous potential for improvement” that Ryan references.

Or you could take the bus.

And I seriously considered that: my emissions would be considerably lower (about 25 to 50 kg of CO2e), and the cost–about $200 return–would have been half the cost of flying and a fifth the cost of the train.

But ultimately I decided that sitting on a bus for 34 hours (15 hours there, 19 hours back) was a bridge too far for me.

And while that reflects a distressing lack of fortitude on my part, it also points out that for low-carbon travel to become as popular is it needs to be, it will help if it isn’t also perceived a dreadful experience.

Taking the train to Montreal, as I found in 2017, is thoroughly enjoyable; taking a long distance bus ride is, by almost any measure, an exhausting and uncomfortable way to travel, and few people would choose it if there’s any other reasonable alternative. 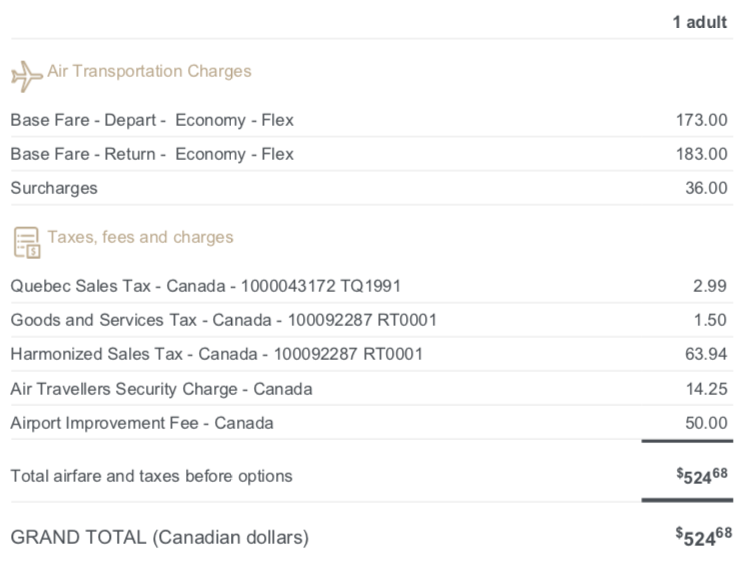 The air trip took 90 minutes. I cycled to Charlottetown Airport. I took hybrid buses and the Metro from Trudeau Airport to my brother’s house, and then, later in the day, we used a Toyota Prius car-share to travel to the Discount Car rental depot to pick up my Chevy Bolt for the drive to New Hampshire.

My next step is to do what Ryan suggested: write my MP–and, indeed, all the federal candidates in Charlottetown–asking them their plans for high efficiency long-distance rail travel from Prince Edward Island.

Did you consider driving an electric vehicle from Charlottetown to Dublin, NH? It's only a ten hour drive. How would that carbon math add up? Maybe an electric rental is not an option here?

I did consider this, and would have happily done it if there was a car rental company on PEI renting electric vehicles. But there isn’t.

Regarding VIA Rail's statement: "The total greenhouse gas emissions for a one-way trip on the Ocean between Moncton to Montreal is: 1,053.71 Kg of CO2e."

Is this a per-person figure?

That Ocean rate is so awful. Are they assuming you've brought a car as freight? Even so, if it takes cars and cargo, I wonder if they figure occupancy and divide the carbon per passenger seat or per kg

I enjoyed catching up on your travels! I used to do the advertising for Amtrak. Granted, it was well over a decade ago but I can assure you the main concerns for the LD routes (vs “high-speed” Acela) were not environmental but being on time on CSX freight routes and trying to keep costs down which is a herculean task in itself. Only (retired) people with a lot of time, money, and a “stop to smell the roses” attitude and outlook took the LD trains, hence low traffic. I did have the pleasure of taking the CA wine train route and did “ethnographic” qualitative research to develop the campaign strategy We did some awesome vintage-style advertising with the artist who did the national park posters.

I also wish we had train service in Alberta but we do have an excellent bus service Red Arrow that runs lots of places but is particularly good in the Calgary-Red Deer-Edmonton corridor. It is usually full, relatively cheap and pleasant. For the same price as cabs to and from the respective airports it delivers you from downtown to downtown which perfect for me for my frequent work trips.