On Sunday afternoon, just after 1:00 p.m., Oliver and Ethan and I piled into the car and headed toward Sackville, New Brunswick to catch the train. Despite our travel plans coinciding with the morning closure of the Confederation Bridge for a fundraising run, the crossing was clear by the time we arrived in Borden, and it was smooth traveling all the way across. We arrived in Sackville just after 3:00 p.m. and in plenty of time to grab lunch at the Black Duck Café before the 4:25 p.m. departure of VIA Train № 15.

It was at this point that the first spanner entered the works: I’d made arrangements with the ever-helpful Rod Allen Company to leave our car on their lot (VIA not offering long-term parking in Sackville, and none being available from the town itself).

The problem was that the place we’d planned to park was dug up for sewer construction, and there wasn’t an obvious alternative. Modelling the “for every problem, there’s a solution” mantra for Oliver’s benefit, I decided to simply park in the short-term VIA lot with a note in the window, and so made preparations in that direction. I also sent an email to Rod Allen’s asking for advice, not expecting a reply given that it was Sunday. But, as we prepared the note, for the window, a reply came in with a mobile number to call, and after a brief consultation I was given a place to park that wasn’t under risk of interfering with the sewer system. 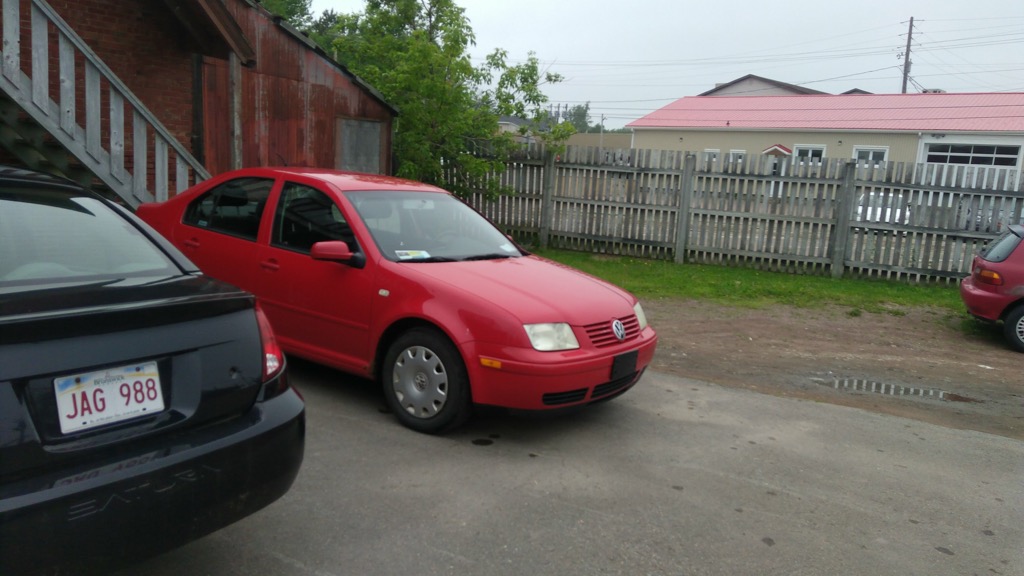 This delay and relocation meant we had to hoof it back to the VIA station quickly, right through the aforementioned sewer construction.

We made it with 15 minutes to spare.

Parking aside, Sackville is the ideal place to catch a train, no matter whether you’re heading east or west: you avoid Moncton traffic, save 30 minutes of driving in both directions, and, as the Sackville railway station isn’t staffed, any anxiety-inducing station formalities are completely dispensed with: it was just me and Oliver and Ethan and one other passenger boarding. 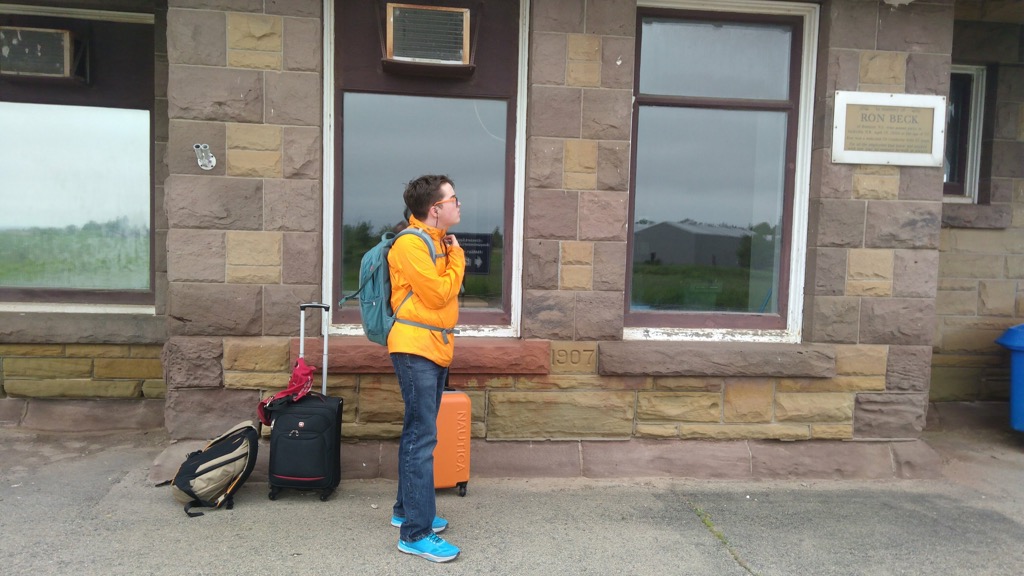 When the train arrived–on schedule at 4:25 p.m.–we were greeted by name by our porter Annette and shown immediately to our room (car 30, room 9).

As arranged previously, this was the accessible room–a standard room ganged together with an accessible washroom and some mobility-focused aids–the larger size of which was a big help both for claustrophobia mitigation and for giving us enough room for Ethan. It was everything we needed: two beds, a toilet, sink, and an electrical outlet (just before we left home Oliver found a helpful YouTube video that recommended bringing a power bar, so he did; this was a big help for our multi-device-charging lifestyle).

Here’s the view from the seats (the heavy curtain separates the “room” from the “washroom,” and affords basic privacy only): 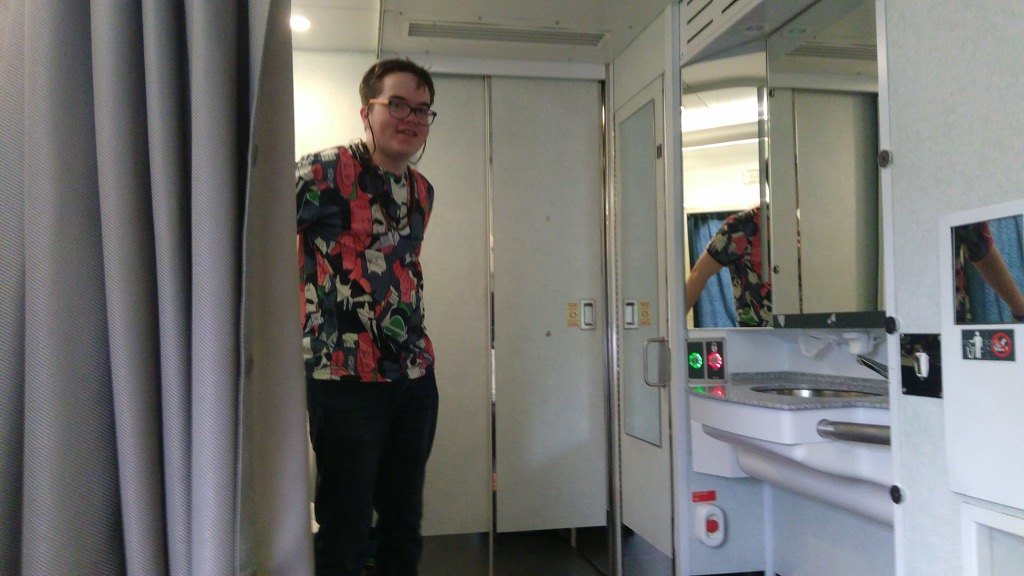 And here’s Ethan enjoying a rest on the floor: 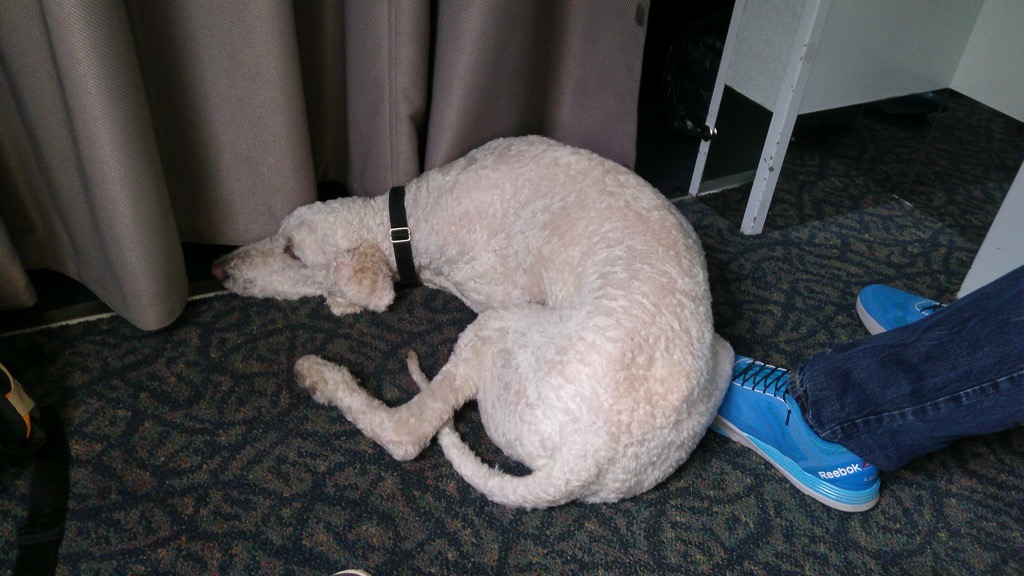 Just as we were getting settled, there was a knock at the door: it was the train’s Service Manager, Zach Wells, who also happens to be the son of the late Andy Wells and Lynne Douglas, and a great Canadian poet to boot. I’d never met Zach before, but he knew of me because of my interview with his father late in his life, and it was incredibly nice of him to seek us out an introduce himself (you can purchase Zach’s books from his mother’s booth, Sheep’s Clothing, at the Charlottetown Farmer’s Market).

Once we’d established ourselves in our room, we trekked 8 cars back to the Park Car (№ 8711, The Revelstoke) to enjoy the view from the dome car, along with a cup of tea and cookies and some Maritime trivia. I tried my hand at sketching the dome car, but failed abjectly, both because of the jiggling train and because the dome car is mostly challenging curves that were hard to wrap my head around. 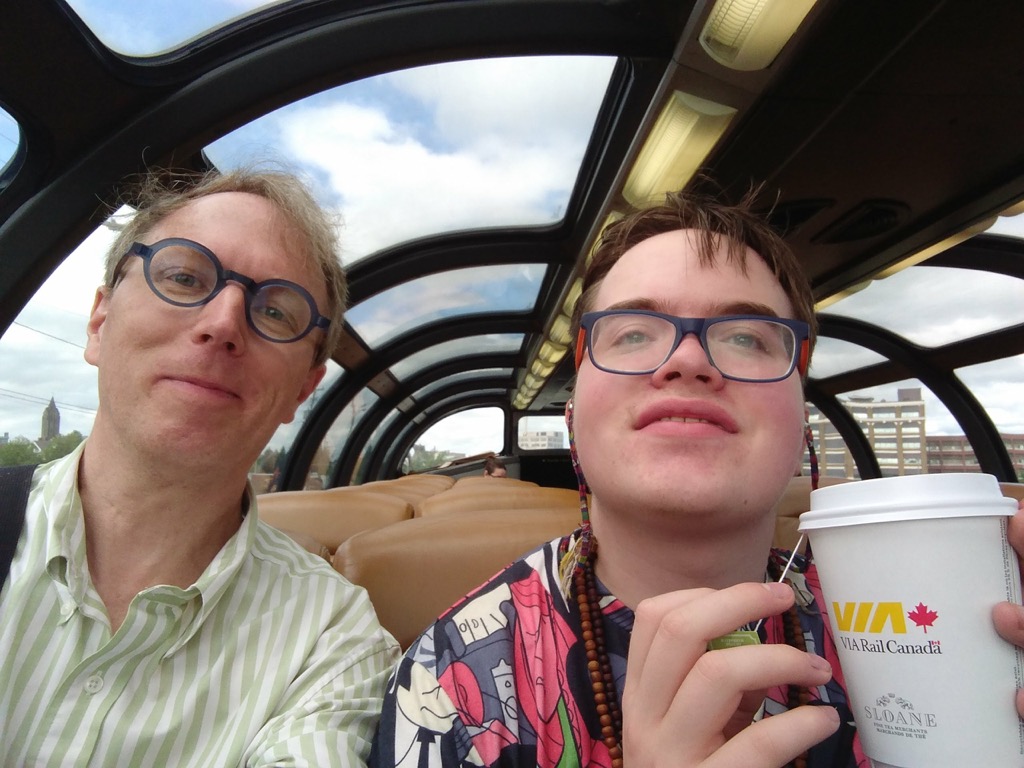 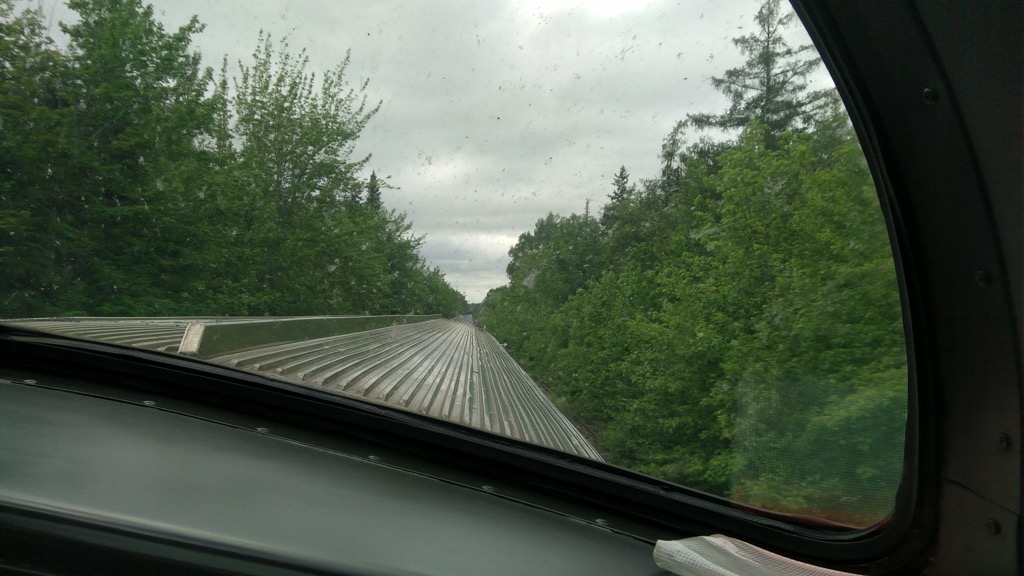 As our 6:30 p.m. dinner reservation neared, we trekked back to our room, and then showed up in the dining car at the appointed hour.

We started out dining by ourselves, and were joined later by a young couple and some good conversation (she works for Statistics Canada, he for TripAdvisor). The food, which VIA calls “catered,” to make it clear that there are no longer chefs on board, was actually quite good: Oliver had the pork loin and I the quinoa, and we both had the maple cake for dessert.

After supper we adjourned to the snack bar car, which also serves as the “wifi lounge,” and Oliver made his rounds of the social media and I took another try at train-sketching.

We returned to our room around 9:30 p.m. to find the seats transformed into beds as previously arranged with Annette, and, after sorting out the bunk beds (Oliver opted to take the bottom, which implied Ethan would be sleeping on top of him; I got the upper), I got Oliver into bed, and figured out a way of beaming his podcasts from his phone as per usual bedtime protocols. I stayed up to allow me to take Ethan out to pee at the scheduled 15 minute stop at Campbellton, NB (not an easy feat given the exotic smells and sounds). And then I headed to bed myself.

It turns out that I can’t really sleep on trains: the sound and the motion were just slightly too much to handle, and while I managed to drift off a couple of times, I did not sleep soundly, and so I was ready to give up completely by the time my alarm went off at 7:00 a.m.

Oliver, on the other hand, despite having a 65 pound dog sharing his bed with him, slept like a log.

Breakfast on the train is first-come, first-served, but there was no wait when we showed up around 8:00 a.m. The breakfast was great: Oliver had a scramble of sausage and eggs, I had the continental with oatmeal. Between the fresh fruit and the toast and the yogurt we were well-fed, and the coffee was hot and strong. 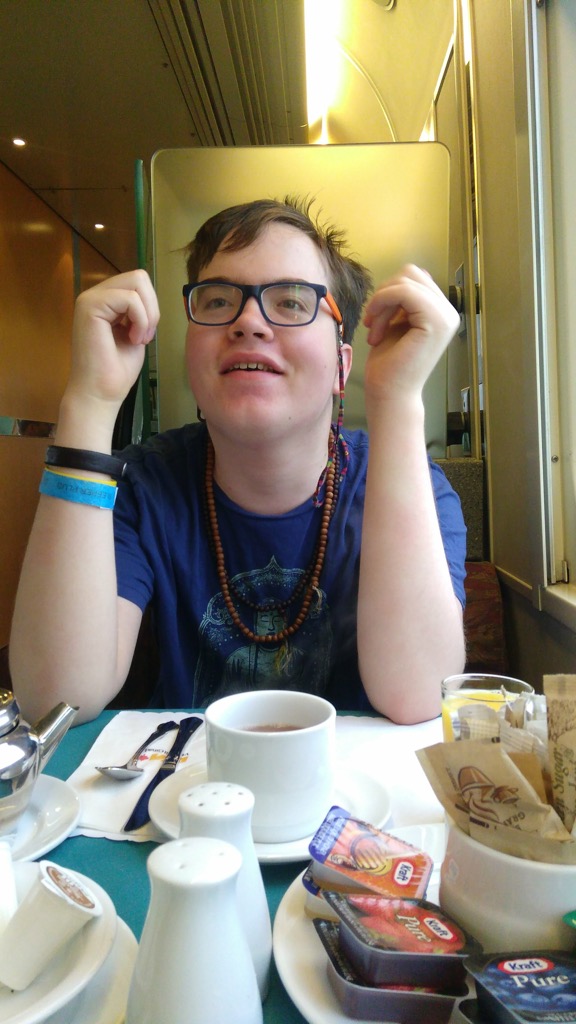 By the time breakfast was finished and we got our suitcases re-packed, we were getting very close to Montreal; we sipped a little more wifi, had a brief chat with Zach, and then, before we knew it, we were pulling into Central Station in Montreal and plunged into urban life.

Our nominal reason for traveling by train was that Oliver, for the time being, prefers to avoid airport security and its attendant anxieties (we’re working on this, but we need time); it turns out that train travel is actually rather pleasant (lack of sleep aside), and I may opt for the train in the future even if flying isn’t difficult.

A few final notes about the experience:

I went into this trip thinking that it would be a long, boring slog; I packed my bag with half a dozen unread issues of The New Yorker, thinking I’d have endless hours to fill. But time passed quickly, what with the eating and sleeping and dome car visiting and podcast wrangling. And so it all breezed by before I noticed it. 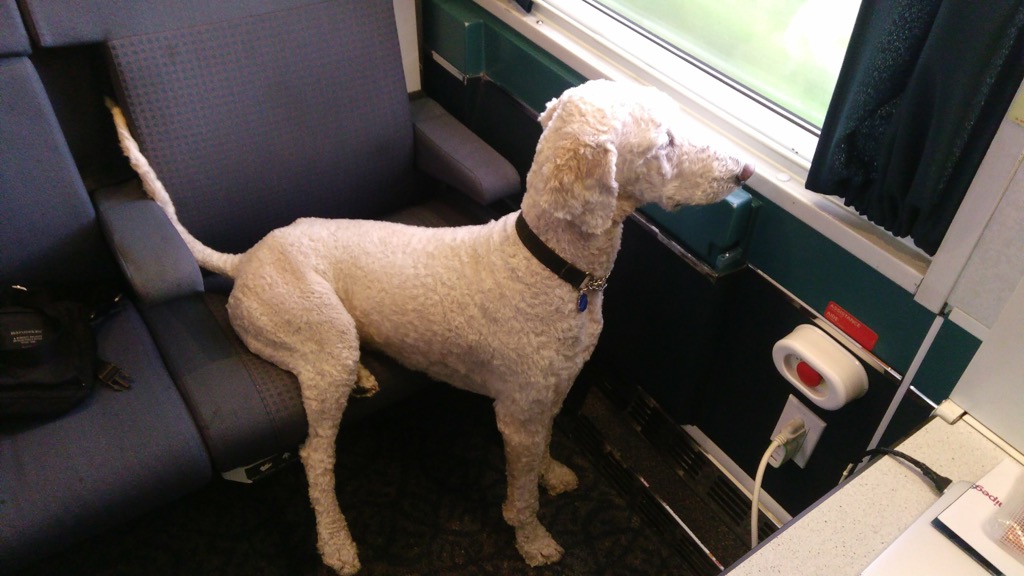