After cycling to the airport, flying to Montreal, and making my way by public transit to my brother’s house, I was ready for the final leg of my journey from Charlottetown to southern New Hampshire.

In 2013 I made the journey by bus, train, and rental car; this time I set out to drive a battery-electric vehicle.

While traveling by EV isn’t “no emissions” travel–the cars need to be manufactured, and something needs to generate the electricity that powers them–doing my charging in Quebec and Vermont for most of my trip, both of which generate more than 95% of their electricity from non-fossil sources, means that an EV is, relative to almost any other means of travel, light on the land. It doesn’t hurt that my client Yankee Publishing has a 93 kW solar array generating a good portion of the electricity that I can plug into while at the office.

It’s not easy to rent an electric vehicle: while you can find them on Turo from private owners, they tend to be expensive (mostly, it seems, Tesla owners paying off their steep car loans). Fortunately, in Montreal, Discount rents Chevy Bolt EVs at very attractive rates: on my last trip to New Hampshire I rented a gas-powered car for 6 days from Hertz for $340; to rent an electric Bolt from Discount for 8 days was $411.

Here’s the play-by-play of how it’s gone so far.

I arrived at the Discount office on Papineau to pick up the car. There was some confusion about the rental terms–I had an email confirming I’d be entitled to 300 km/day; they initially claimed it was 100 km–but we worked it out in my favour. And it turned out that the Bolt they had ready for me was only half-charged, meaning my first task before setting off the next morning on a long distance drive would be to charge it. Otherwise, though, it all went easily, and, after a brief “here’s where you plug it in” tutorial, my brother and I drove off for coffee and groceries and then to find a charging station.

Relative to Prince Edward Island, Montreal has mind-boggling EV charging options: it turned out that there was a Electric Circuit on-street charger just blocks from my brother’s house, and it was free when we drove by, so I parked the car, quickly set up an account with the Electric Circuit Android app, and a few minutes later I was off and charging.

I got an email and text notification when the charge was done, four and a half hours later. The total cost of the charge, with tax, was $4.48 and consumed 28.6 kWh, about what our house uses in 2 days. 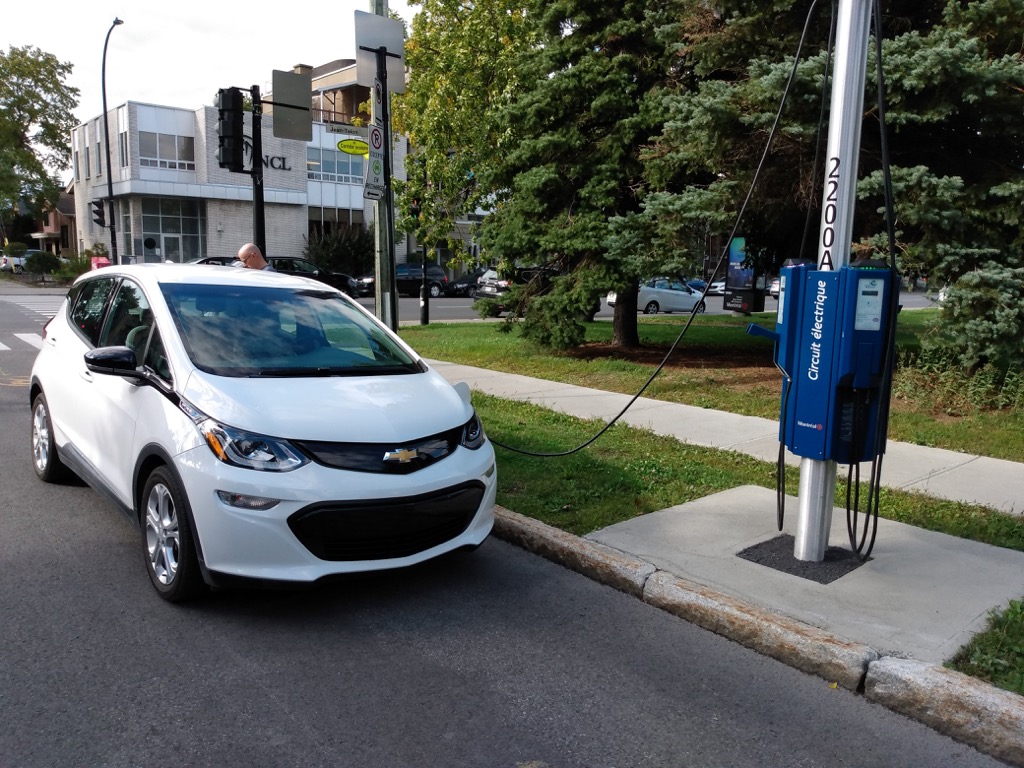 After breakfast with my sister-and-law and my nephews, and some last minute Berenstain Bears-reading action, I headed off on my journey to New Hampshire. It was a beautiful day for driving, and I made good time, arriving at the U.S. border at 11:25 a.m. The line at the border took about 20 minutes to get to the head of; customs formalities took about 20 seconds (where do you live? where are you heading?). And then I was on the Interstate 89 heading into northern Vermont.

About 200 km into the journey, I decided to stop in Waterbury, Vermont for a charge. I wasn’t in dire need of one, by any means, but I needed a break, and I was eager to see as many different charging arrangements as possible.

I followed the road signs pointing to EV charging at the Visitor Centre, and found a ChargePoint station there. It was charging a Nissan Leaf at the time, though, so I headed back out on the highway and up the hill to the Ben & Jerry’s, which promised a whole host of stations. And there were a whole host of stations: a high-speed CHAdeMO DC charger (not compatible with my Bolt) and six level 2 chargers, two from Sema Connect and four from AeroVironment. 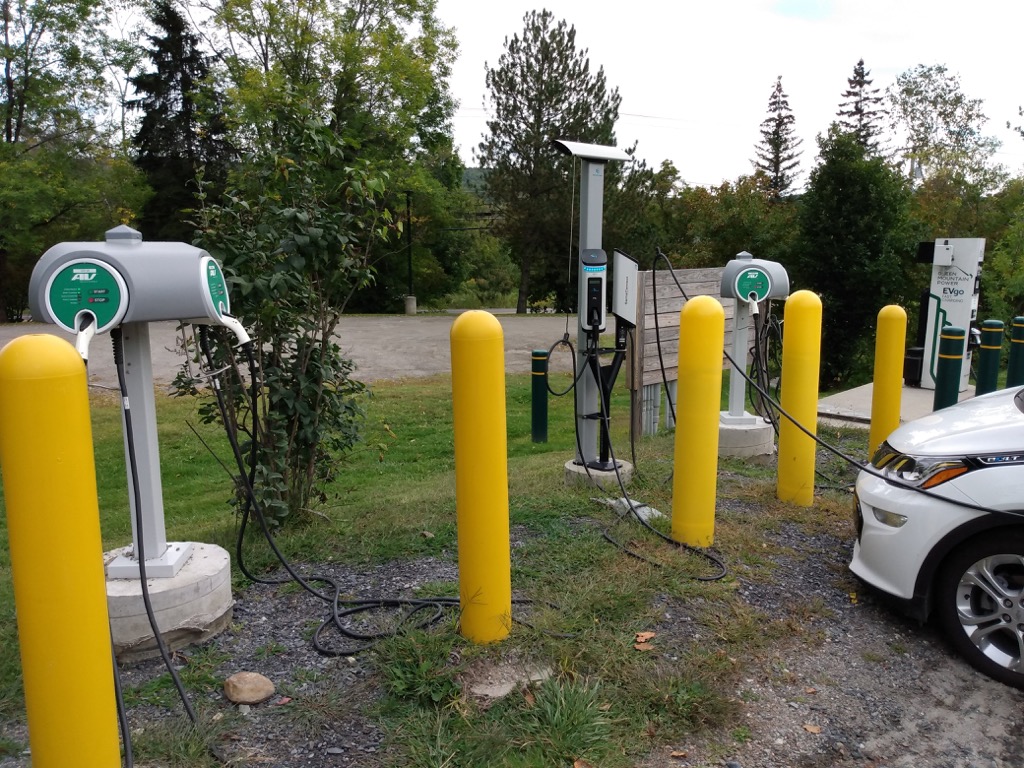 I tried in vain to get the Sema Connect app on my phone to authorize one of its chargers, but it kept failing, so I tried one the AeroVironment chargers and found, despite no signage to this effect, that it was free. I left the car charging and took a quick walk around the grounds and, finding them generally tired and depressing, decided to decamp down the road to a putative high speed charger at a Chevy dealer in Montpelier for a full top-up.

I found my way to Cody Chevrolet in Montpelier using Google Maps and found that the dealership courtesy pick-up truck was parked in front of the high speed charger: 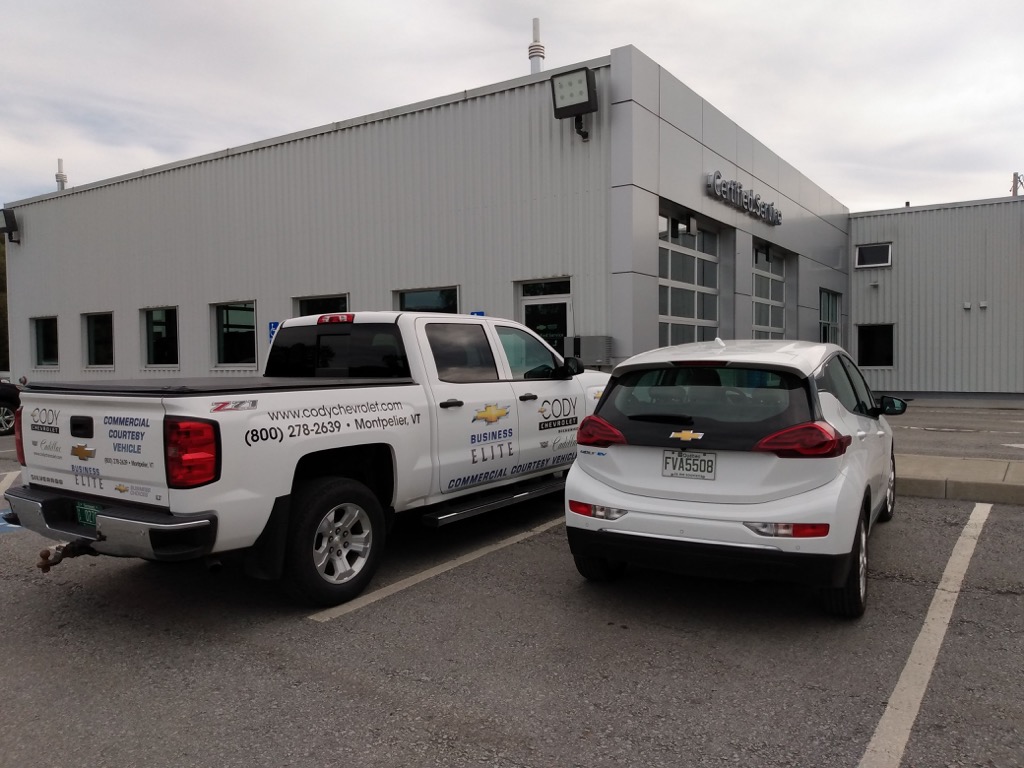 Fortunately the charger’s cord was long enough to stretch to the next parking spot, and I was able to plug myself in. This was a free charger, not networked in any way, so had no way of communicating with my phone to alert me when the charge was done. There were also no instructions whatsoever on the charger, so I to had make my best guess how to use it: 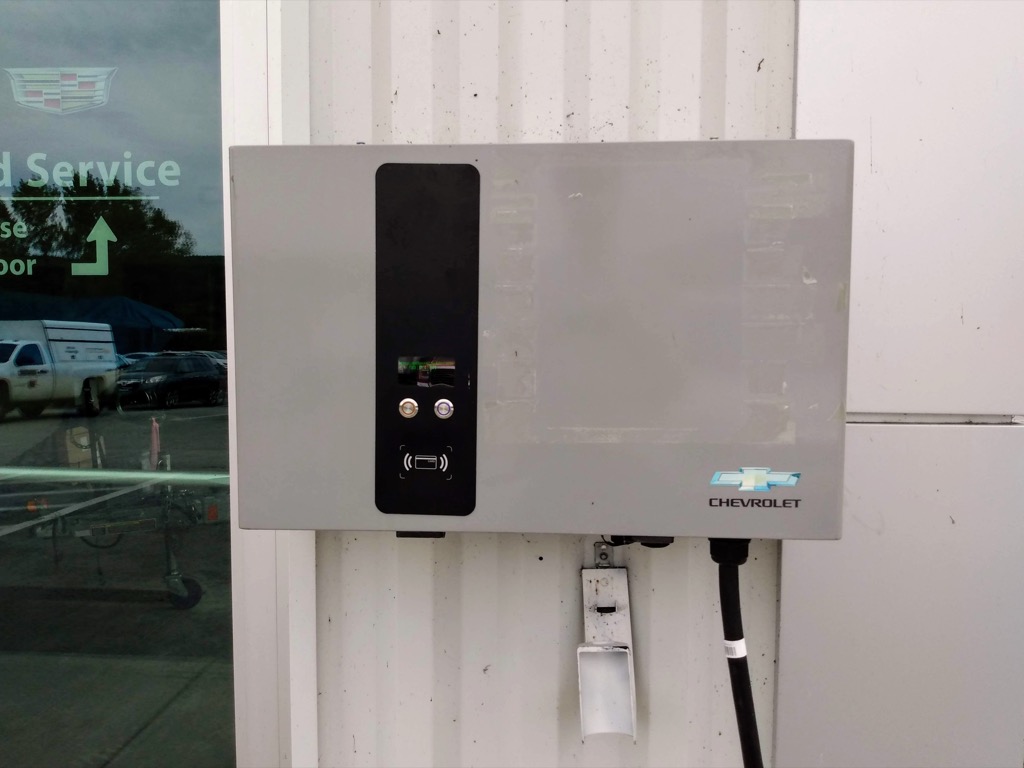 Fortunately my best guess worked, and when I pressed the green(ish) button, it started up in a cacophony that sounded like it was preparing for a Moon launch. The LCD on the charger told me that my Bolt was 45% charged, and that it would be at 80% after 50 minutes. So I left it charging, walked up the road to the 101-year-old Wayside Restaurant for some blueberry pancakes while I was waiting.

When I returned an hour later the charge cycle was just completed, having pumped 21.3 kWh into the car, and taking it to 77% charge.

I got back on I-89 south and headed toward Brattleboro, Vermont, where I planned to eat supper.

As Brattleboro, VT had the final high-speed DC charger before I left the EV-friendly Vermont for the slim charger pickings of New Hampshire, I decided to top up again over supper.

In the High Grove Parking Lot downtown I found an EVgo charger with the right CCS/SAE connector for the Bolt. I ran into a problem getting the EVgo app working on my phone, however, and traced the issue to the fact that the Public Mobile data package for my cell phone that I’d purchased for U.S. roaming had been completely drained of its 250 MB of data by a rogue podcast app. Not only couldn’t I use data on the phone, but I couldn’t renew the data plan without the data plan. I thought I was stuck until I found an open Xfinity wifi with a 24 hour free trial. That was enough to get me sorted with the EVgo app, and once it was installed and I’d entered a credit card for billing, the charger started up. 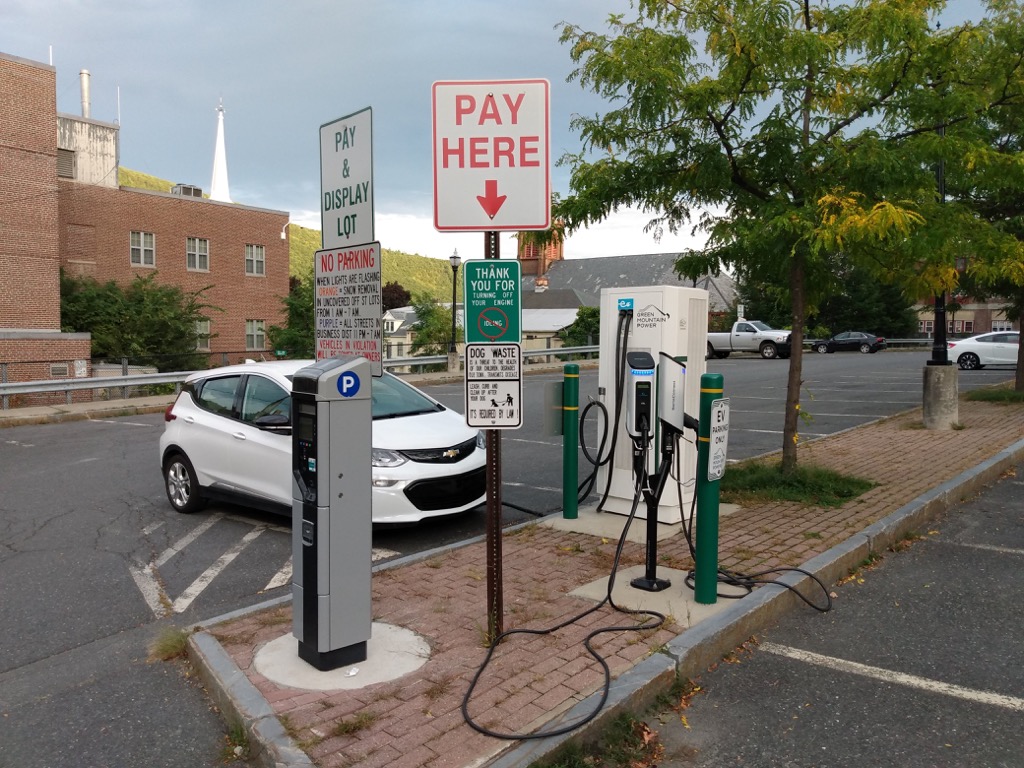 I walked downtown for supper at The Works Café. After supper I walked back up the hill and just as I entered the parking lot I got a text telling me the charge was finished. At 35 cents a minute, this was the most expensive charge of the trip: I paid $16.85 US for 27.75 kWh of electricity delivered in 45 minutes.

I made a quick stop in Keene, NH at the Chevy dealer there to see if perchance they had an unreported DC charger, but they ended up having no charger at all. The KIA dealer next door did have a couple of free AeroVironment chargers; I added them to the PlugShare map and drove on.

I landed at the Jack Daniels Motor Inn in Peterborough, NH–my home for the week–with the Bolt reporting it still had 250 km of range left, which was a healthy way to start the week. I was pleasantly surprised to find that a dedicated parking spot for me had been set aside, with orange cones and a sign, along with an extension cord connected to a standard electrical outlet. The Bolt has a charger in its trunk that can be used in situations like this; it’s a slow as molasses way to charge, but it’s something, especially if you leave it overnight. So that’s what I did: 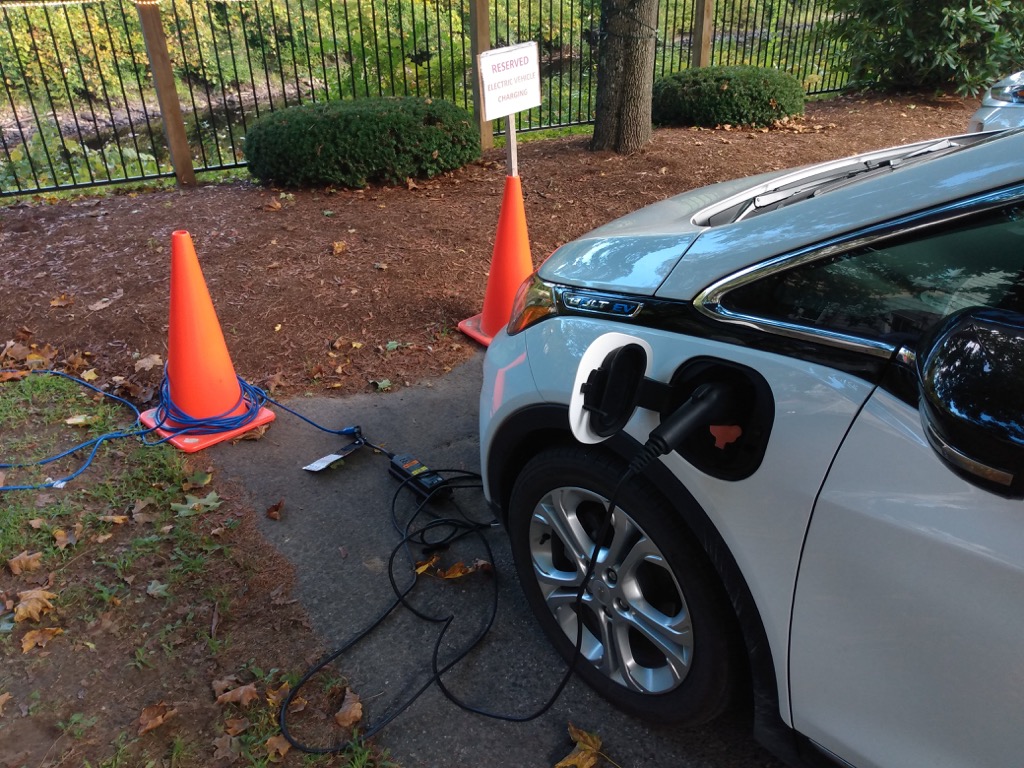 Chevy suggests that charging from a standard 120-volt outlet will provide 4 miles per hour of charge. When I got in the car the next morning it reported 301 km of range after 12 hours of charging, an increase of 51 km (31 miles). That works out to about 2.5 miles of range per hour, so slightly less than advertised.

When I arrived at Yankee Publishing on Monday morning–my workplace for the week–I found that the custodian had helpfully set up a place for me to plug into an outlet in the garage: 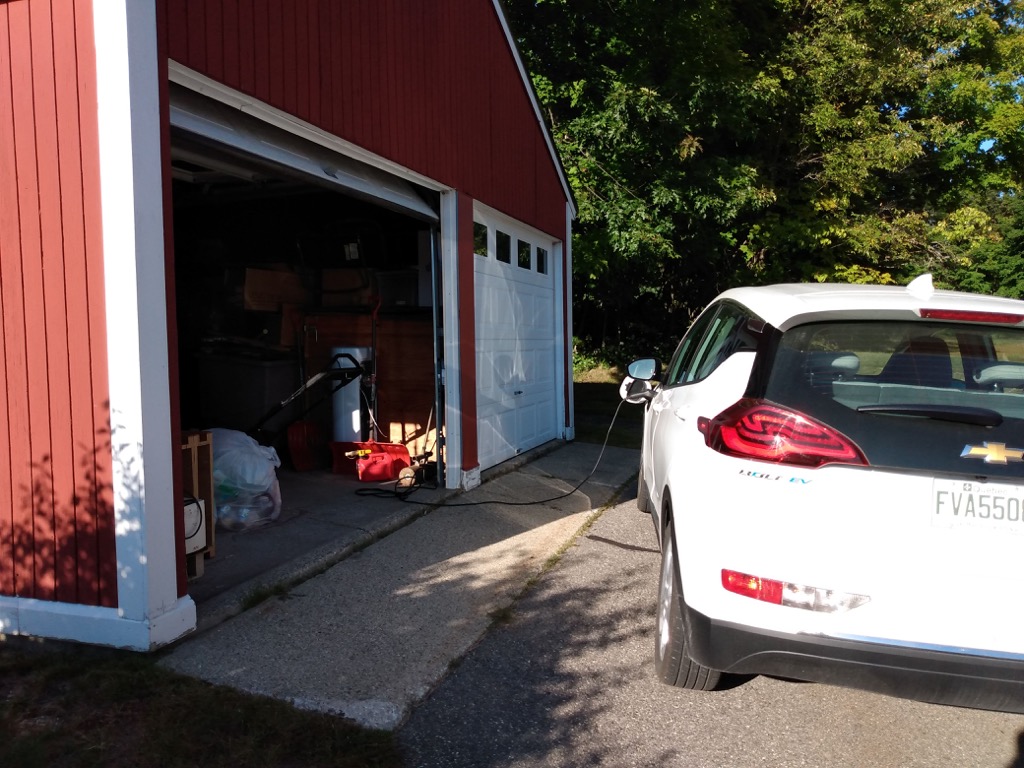 I’ve been back and forth to Yankee every day now–it’s Wednesday as I write–and I’ve been charging during the day there and charging overnight at the Jack Daniels. I was worried that my 12 km commute in each direction would exceed my ability to keep up and that I’d need to dash into Keene or Brattleboro for emergency top-up.

But I pulled out of the Yankee parking lot at the end of the day yesterday with the car reporting 431 km of range, which is, in theory, enough to get me all the way back to Montreal: 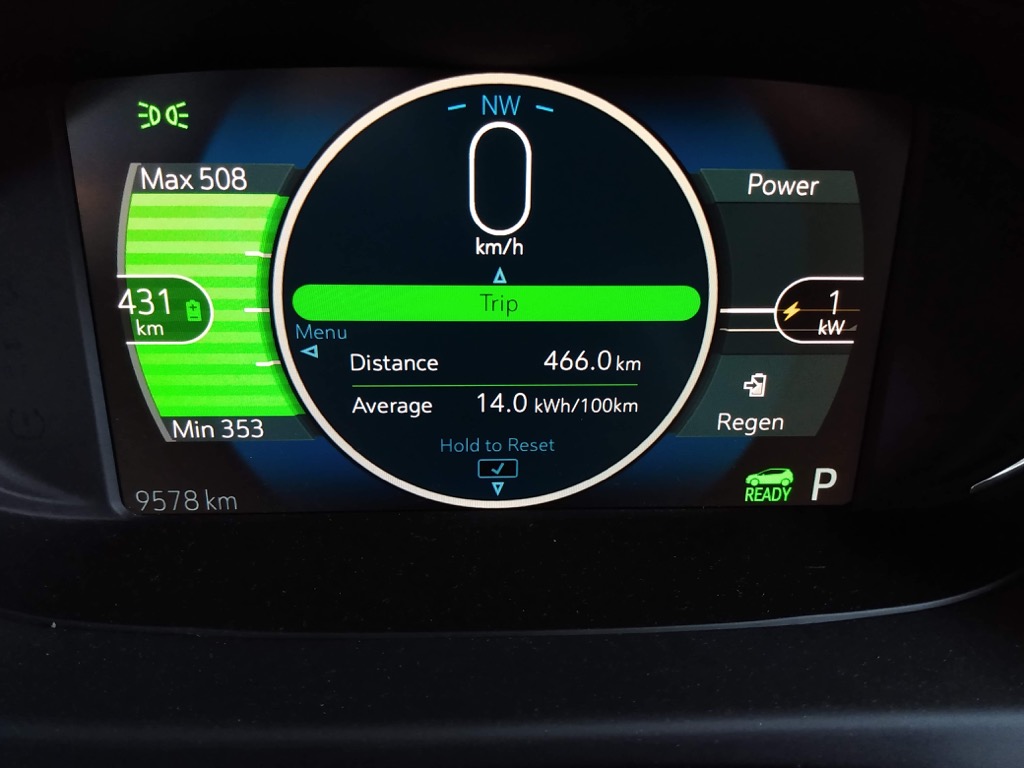 So, in other words, things are working out just fine on the charging front.

The Bolt is the best car I’ve ever driven: it’s easy to drive, fun to drive and, when you need it, has enough acceleration to feel like you’re riding a rocket. Once I got over my range anxiety-anxiety, there ends up being no compromise for driving an EV compared to a gasoline-powered one. Indeed it makes using fossil fueled vehicles seem antediluvian. If nothing else I’ve become convinced that if I ever again buy a car–an open question–it will be an EV.

That said, there are a few weird things about the car, mostly related to technology. In theory the myChevrolet Android app should allow me to do everything from monitor the vehicle’s charging to unlocking the doors. But I became mired in a confusing thicket of accounts and credentials and references to a need for either enabling “Connected Services” and/or “OnStar Services.” Finally I just gave up on this.

Similarly, the in-car wifi access point, alluded to as being included in the rental by this Discount Car Rental blog post, has no Internet access, and seems to require purchase of a service I cannot purchase because I don’t own the vehicle. As I found in Brattleboro when I ran out of data on my phone, EV charging, because it uses different apps from different networks, demands always-on-data, and having in-car wifi would seem like a helpful part of EV rental to enable this.

The Plan for Heading Home

I start back toward home on Friday. I’ve booked a room at the Latchis in Brattleboro for Friday night (conveniently located atop the Latchis Theatre, which is showing the Downton Abbey movie!). I’ll top up the car in Brattleboro for the drive north and leave Saturday night for Burlington. I’ll likely stop again near Montpelier for a charge before staying the night with Valerie and Lars, Sunday I need to have the car back at discount by 2:00 p.m., and I fly out of Montreal for home on Sunday evening.

Where I’ll pick up my bicycle and make a truly zero-carbon last 5 km of my trip along the Confederation Trail. 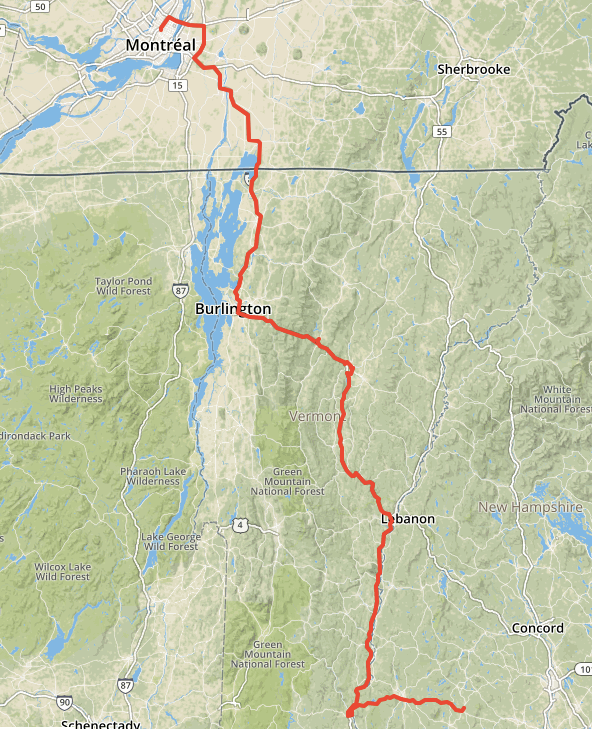