After Ton first mentioned Obsidian, I decided to try it out: like Ton I’m looking for a way out of Evernote, but I’m also looking to become better at making notes about projects and plans in a trusted repository so that I can refer back later as a resource (on the job we’ve used Trac for more than a decade now, and it’s proved invaluable to be able to refer to the copious notes my younger self took).

Obsidian has a simple plug-in called “Daily Notes” that makes it slightly easier to create a new note every day, and, on a lark, I started to do this, noting things under three headings: “Work,” “Projects,” and “Home & Family,” with an additional “Accounting” thrown in on money-handling days. 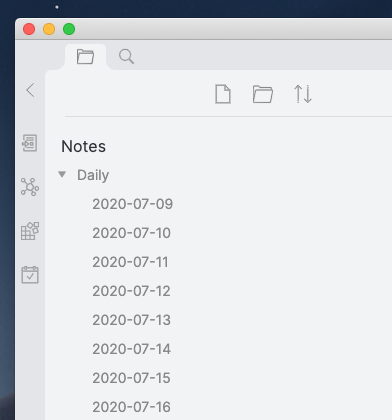 My father kept a daily log from the mid-1960s until he died. He started off on paper, and moved to using a computer in 1990. It was that log we consulted when we wanted to known where we watched the walk on the Moon in 1969. I have 28 years worth of his digital log in a file on my computer: it’s a plain ASCII file with 301,543 lines in it. Reading it now, I realize that I use exactly the same style and voice as he did for all those years, and cover much of the same ground, freely mixing work, family and projects.

Among my notes for today:

When I cracked open Dad’s log after he died, I thought I might find deeper insight into my father, some undiscovered aspect of his personality that might explain him, and me, and fatherhood.

I found “tilled middle garden” and “DLed and tested some BBS files” and “ran memmaker on 386H.”

Where there are references to me they are things like “email from Peter, not interested in Honda after all,” and “call from Peter, their house offer has been accepted,” and “big breakfast of potato pancakes made by Peter with new food processor.” And I realized that he wasn’t writing for anyone other than himself. And I’m doing the same thing.

There is utility, I have found, in creating a running reference: I couldn’t remember when an intake worker had called me from the government in July, and then I remembered that I noted it. And I’ve got our new refrigerator’s serial number noted so that when it breaks in 20 years, I’ll know where to look. But more so than any practical reference, I think there’s value in noting the events of each day as a way of simply processing what happened, developing a sense of progress (or not), realizing that when it feels like nothing at all has been happening, there’s actually been a lot.

Re: Obsidian. Interesting. I've been running a personal MediaWiki instance since... checks notes 2009, for notes and research and some history, but very much not for daily notes. Initially my thinking was that a web app would be convenient to check from several different devices, and MediaWiki was sort of a standard piece of software, and it's got a markup language and links and history. But that was before I fully grokked git, and a textarea as an IDE leaves a little to be desired. Perhaps it's time to look into a switch.

I still love your optimism in thinking that your new fridge will last 20 years. I certainly hope you are right since I have the same model.

I have a dairy, one of the 5-year kind, that my grandmother kept starting after my mother was born. As always, there are lots of entries in the early days and months and for the first child and fewer for the other three children. My grandmother never mentioned herself anywhere in all the entries. She always wrote about others. She loved home, family and her "simple" life on the farm with her in-laws, children, dying relatives and the comings and goings of hired help, extended family and neighbours but the diary reveals little of herself except her selflessness.

I have been making day logs since sometime in April and in Obsidian from the day I wrote the blogspot you mention. I am not using plugins for Obsidian, for day logs nor for e.g. Zettelkasten. This as plugins usually create functionality that is not exactly matching my own workflow. So I use Textexpander to insert day log titles, timestamps and time based tags where needed, the way I want it.