My family spent the summer of 1969, as we did most summers in the late 1960s and early 1970s, “in the field” with my father. His work as a nearshore sedimentologist, with a particular interest the Great Lakes, meant that each summer we would decamp to a new location on Lake Ontario, or Lake Erie, or Lake Huron, generally to a provincial park. I remember those summers for their park rangers and salamanders and beaches and forests and tents and trailers.

On July 20, 1969—fifty years ago today—we were, by my mother’s recollection, on the shore of Lake Ontario near Cobourg. My father’s log from that day picks up the story:

Retired around 7 PM with the small TV set and watched moon walking using a VW battery and converter.

While I have memories before July 20, 1969, none are as crystal clear and vivid as that one: the family gathered around a tiny TV set, the picture–perhaps because it was running off a VW battery–smaller than it was supposed to be. I’m not sure I was old enough, at three, to comprehend the enormity of what was happening, but I’m certain that I picked up on my parents’ excitement. And, of course, that we were allowed to stay up much, much later than usual.

According to my parents, there were no family photos taken on that particular day, but here are some that my mother sent of me and brother Mike (just two years old himself) and our father in that summer of 1969. 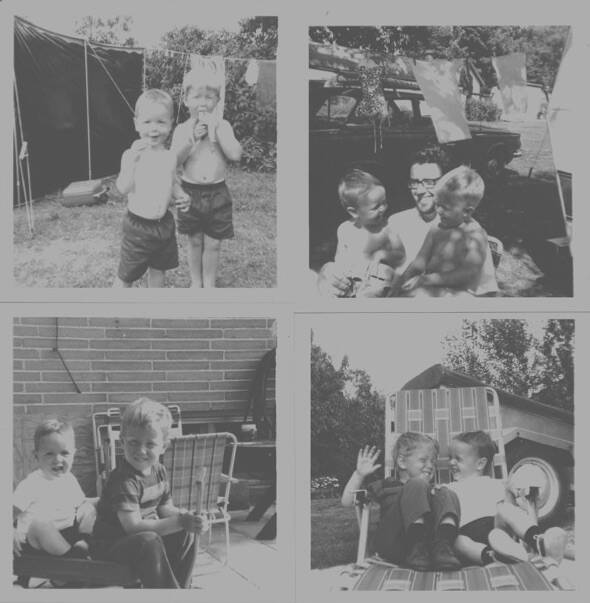 My next palpable memories, at least those involving the USA and television, were of the daily updates from Vietnam, and then of Nixon resigning.

I remember the day too. My mother made my sister and I come watch on TV because it was "one of the biggest moments in history". At seven years of age I didn't understand the enormity of it but the moment has always stayed with me.