My friend Ton and I are engaged in parallel but otherwise uncoordinated efforts to, as Ton describes it for himself, “reconfiguring my online routines to increase privacy safeguards, and bring more of my data under my own control.”

For me this meant migrating my email to FastMail (still a third-party service, but more secure than self-hosting and under more of my control than Gmail), and migrating my calendar, contacts and file syncing to ownCloud (and, now, its fork nextCloud).

Ton also migrated to ownCloud for his file syncing, and has just completed an impressive migration from Gmail.

For both us, however, the final frontier is Evernote, which we both use extensively.

For me it’s ironic that I’ve left Evernote until last, as it’s where you’ll find my most private and guarded digital documents. My bills. A scan of my passport. Medical information.

In other words, it’s where I store almost everything that we’d generally consider “private information.”

Evernote, of course, offers some measure of security in its product, so it’s not like I’m storing files in the clear, but it remains mostly opaque, and certainly doesn’t meet Ton’s “under my control” test.

While I use Evernote to archive and make-searchable a variety of documents, the mission-critical use I make of it is as the backbone of my bill-paying workflow. Here’s how it works:

I get almost all of my bills these days via email (among the notable exceptions are, ironically, invoices from my accountant).

Here, for example, is the current “Bills — Unpaid” notebook showing a Canadian Tire MasterCard bill that’s due to be paid on August 1, along with a TD Visa bill due on July 28 and our PEI Provincial Property Tax bill, due on August 24:

When the due date arrives, Evernote emails me an alert and the Evernote mobile app on my Android phone sends me a notification, so I’m well-warned that it’s payment time.

When I receive this warning, I login to my Provincial Credit Union website, pay the bill online (except if it’s my accountant; I can only pay my accountant with a paper cheque).

I copy and paste the confirmation message from the bill payment screen into Evernote, into the same note where I kept the original bill, mark the note as “done”, and move it into the “Bills — Paid” notebook.

Here’s our mobile phone bill for July from Virgin Mobile, for example, as it sits in this notebook now that it’s been paid:

Why do I use Evernote for this?

Breaking it down for myself yesterday, by way of figuring out what I need to replace it, here’s what I came up with:

As a tentative step toward emancipation from Evernote, I’m experimenting, this month, with a new filesystem-based bill-paying workflow in parallel.

I’ve set up a simple folder, financial, in my nextCloud folder:

And I use the paid and unpaid folders in the same way I use Evernote notebooks. So when a new bill arrives, I put it in the unpaid folder.

I create an alarm in the Reminders application on my Mac (which syncs with my nextCloud via CalDAV, so it’s also available on my phone, via that Open Tasks app for Android): 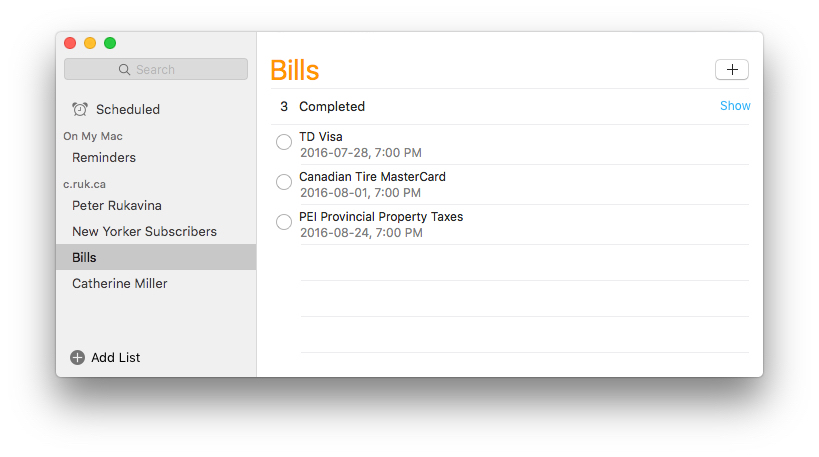 When I’ve paid a bill, I use an Alfred workflow I setup that allows me to select a bill anywhere on my Mac, double-tap the command key, and run this AppleScript: 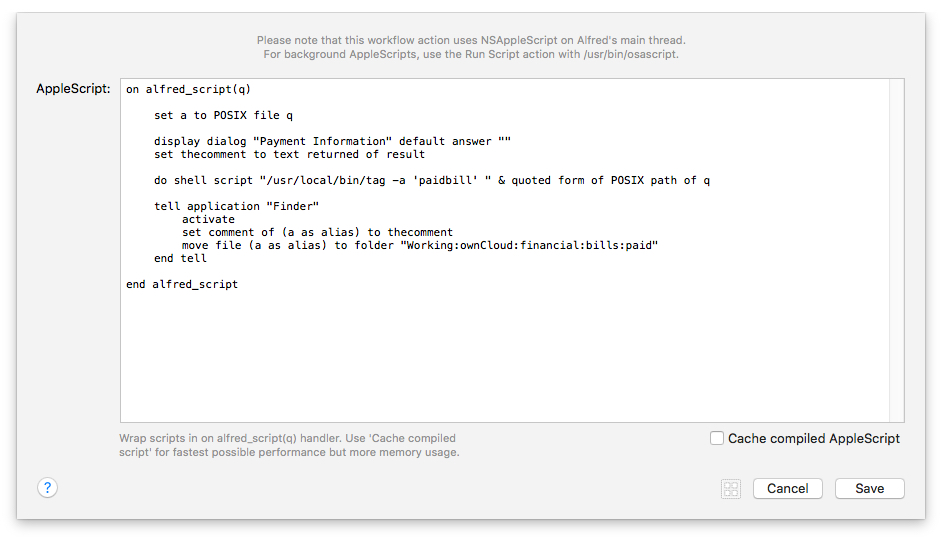 I then mark the reminder I set as completed.

Using Alfred for this actually improves the usability of the workflow over Evernote’s a little. Using the already-syncing reminders apps on my phone and desktop solves the alerts issue. Using the tags and comments functionality of OS X tentatively solves the annotation issues, and using a nextCloud folder solves the syncing challenge (although the comments and tags, while they survive the syncing, aren’t accessible from other non-OS X devices). I’m still working on search.

I’ll do this for a bit, in parallel with my Evernote system in case I want to revert, and see how it goes.