Like the original the fifth estate and e e cummings, my friends at silverorange prefer lowercase. Which makes starting sentences that start with silverorange difficult for someone like me who wants to follow both silverorange’s rules and society’s.

A conundrum I avoid simply by avoiding starting sentences with silverorange.

I have known the founders of silverorange from before they were silverorange; in some cases I’ve known them since they were 14 years old. Now they are at or approaching 40, and I have been, by times, their tenant, their conference co-organizer, their lunch companion, and their partner-in-podcasting. And, as individuals, their friend.

Their company turned 20 years old yesterday, and they celebrated with an event for friends, family, colleagues and clients at Brakish; here’s a soggy audience listening to various of the founders talk about their relationship to the company: 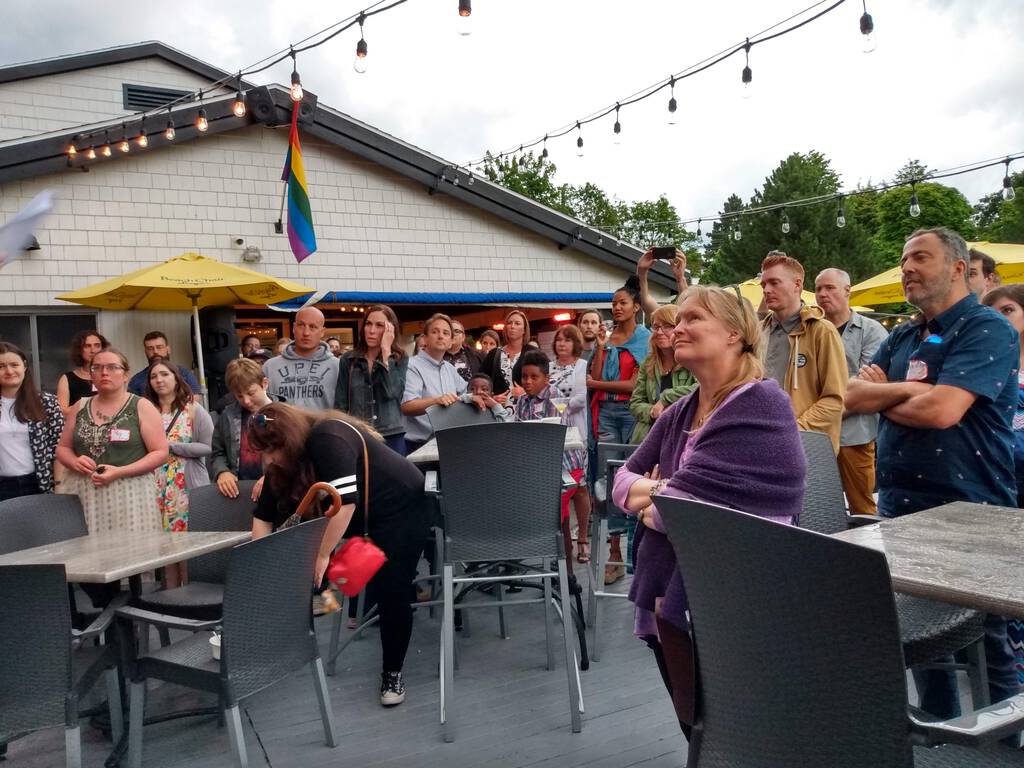 Being in close proximity to silverorange for such a long time has been a unique privilege: I have watched as they transformed from the chrysalis of cocky teenage entrepreneurship into the butterfly of a well-managed, well-respected company.

Silverorange (damn, I slipped) is perhaps most remarkable for the cultural transformation it’s gone through in recent years, seeking to throw off the toxic masculinity of the ironic brogrammer to become a company that thinks deeply about inclusion, respect, and diversity.

As co-founder Steven Garrity wrote two years ago, in A company on the verge of adulthood:

We’ve discovered that it’s both hard and easy to change the culture of a company. At one of our annual company retreats, we were discussing ways to improve our team over the coming year and one of our employees made a revolutionary suggestion:

We should be nicer to each other!

He was referring mostly to a culture of sarcastic insults we had grown accustomed to, but we all agreed that treating each other with more respect was worth a shot. It seemed like a good opportunity to shed our ironically ugly humour. As one of the key culprits, I can safely say that in addition to being unnecessarily negative, it just wasn’t funny. We don’t miss it.

This small initial change was surprisingly abrupt and surprisingly easy. It seemed like only a matter of days before what had been totally normalized started to stick out as inappropriate. We even came to refer to the echoes of our former vulgarity as “old office humour” — a phrase we still use as a reminder/warning to ourselves.

If we hadn’t addressed this glaring surface-level ugly tone in our humour, making our team more diverse would have been much more difficult.

I was witness to, and at the very least a complicit bystander to, silverorange 1.0, and that the company grappled with itself and emerged so fundamentally changed gives me great hope about the possibility for positive change to happen almost anywhere. Including inside myself.

Thanks so much Peter - and thanks for being part of that past twenty years.

This got me a little weepy. <3

Also, our style guide has evolved to allow capitalized silverorange at the beginning of sentences, so you're completely in the clear on that front.