Six years ago I moved my office from 84 Fitzroy Street into the second floor of The Guild, 3 blocks south, leaving my mates at silverorange behind, and placing myself inside the rollicksome heart of the Island’s musical theatre scene.

The Guild has been a lovely home for these 6 years, but I’ve been getting itchy feet since last summer. It would be nice to have “composing” and “printing” in the same room, as opposed to being separated, as they are now, by three flights of stairs. I was looking to save a little on rent. And, truth be told, for all its myriad wonders, I didn’t feel myself capable of living through another season of Anne and Gilbert playing steps from my desk through the summer and fall.

So I’ve been keeping my eyes open for possible new homes.

I have unique needs: I need both a digital-friendly office space, and a space capable of supporting the weight of a 1 tonne letterpress. Such spaces are not easy to come buy: unlike other cities, Charlottetown doesn’t have an industrial past that left hulking factories ready to be re-purposed. Downtown office space is always in short supply, and downtown “light industrial” space is almost non-existent. Believe me: I’ve looked at almost everything available over the last 10 years.

One day in January, though, I happened to be cutting through the yard between St. Paul’s Anglican Church and the church’s Parish Hall. I noticed a light on in the basement, which was the first time I was aware that there was a basement under the Parish Hall.

Which is strange, because I’ve lived directly across the street from the Parish Hall for the last 18 years. You think I would have figured this out.

When I got home, I sent the church office an email, inquiring as to whether they might have space in the basement they were interested in renting out; the next morning I received an email back telling me that, indeed, they did have a room to let, and that I was welcome to take a look at it.

Long story short: the room turned out to be perfect. And I have a new office.

It’s about the same size as my current office,  300 square feet (about 25 square metres), has a solid poured concrete floor, easy access, with wide hallways and strong staircase, to the parking lot (important for moving heavy objects like the letterpress) and, despite being in the basement, is bright, has two windows and a ventilator.

And, of course, most significantly: it’s at 101 Prince Street, about 14 seconds walk from our home at 100 Prince.

I picked up the keys to the new office yesterday, and I’ll gradually migrate east up Richmond Street over the month of March.

Lots of arrangements still to be made. I’m hoping to be able to beam Internet across Prince Street to allow me to have one high-speed connection for both home and office. I need to arrange to have McQuaid’s come and move the letterpress (and to figure out how to shave off an inch of its width to allow it to fit in the 31 inch wide door to the new office). I’m going to swap out the fluorescent lights for LED ones, and I need a couple of additional electrical outlets installed. And there’s moving the rest of my stuff, which I plan to do a little bit of each day.

The church has been nothing but wonderful and welcoming through all of this: they cleared out the room, which had been a Sunday School classroom in a former life (hence the cloak hooks and dual blackboards and bulletin boards, one at either end of the room) and was, more recently, a storage room. They repaired and painted the floor. And, most importantly, they’ve fully embraced the notion of my tenancy.

It’s not without some trepidation that I move, mind you. Nothing to do with the new home, but a fear that, by having work and home be so close, I’ll end up constricted my already-geo-constrained life further. I’ll need to make a little more effort to leave the neighbourhood more often.

Fortunately, I long ago mastered the art of not working all the time, so I’ve little fear about “I’ll just pop over to the office for a bit after supper” creeping back into the 3:00 a.m. coding sessions of yore: my mind and body no longer support that kind of activity.

When the move is complete, and the dust has settled, I’ll have an office-warming and invite you all.

It’s 25 years this month since I moved to Prince Edward Island; my first office was at 156 Richmond Street. So it’s taken me a quarter century and I’ve simply moved 600 feet east. 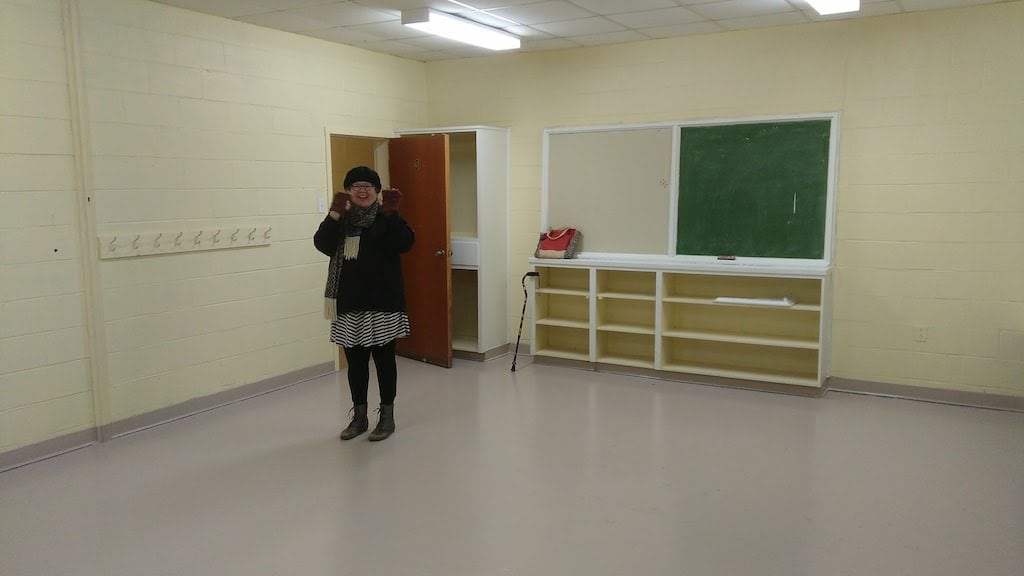 Really nice office, Peter. Is that your secretary in the photo?

Congratulations on the move to the Parish Hall, your new Office and on celebrating 25 years on PEI. The change you must have seen in the Province and Charlottetown since then.

"figure out how to shave off an inch of its width to allow it to fit in the 31 inch wide door to the new office". Looking at the photo and comparing it to the mental image I have of your letterpress, I suspect it might be easier to shave an inch of the doorposts, e.g. by removing the door frame temporarily?

Fortunately I can saw an inch off the press’s axel without difficulty or compromise.

Congratulations, Peter! It seems like the perfect spot for you, although I understand the concern about having home and work lives so close together.

I suspect you'll have that office for many years to come.