Almost every Thursday for the last 7 years me of Reinvented has joined they of silverorange, plus occasional special guest stars, at Interlude for a meal that’s come to be known as Gong Bao Thursday. 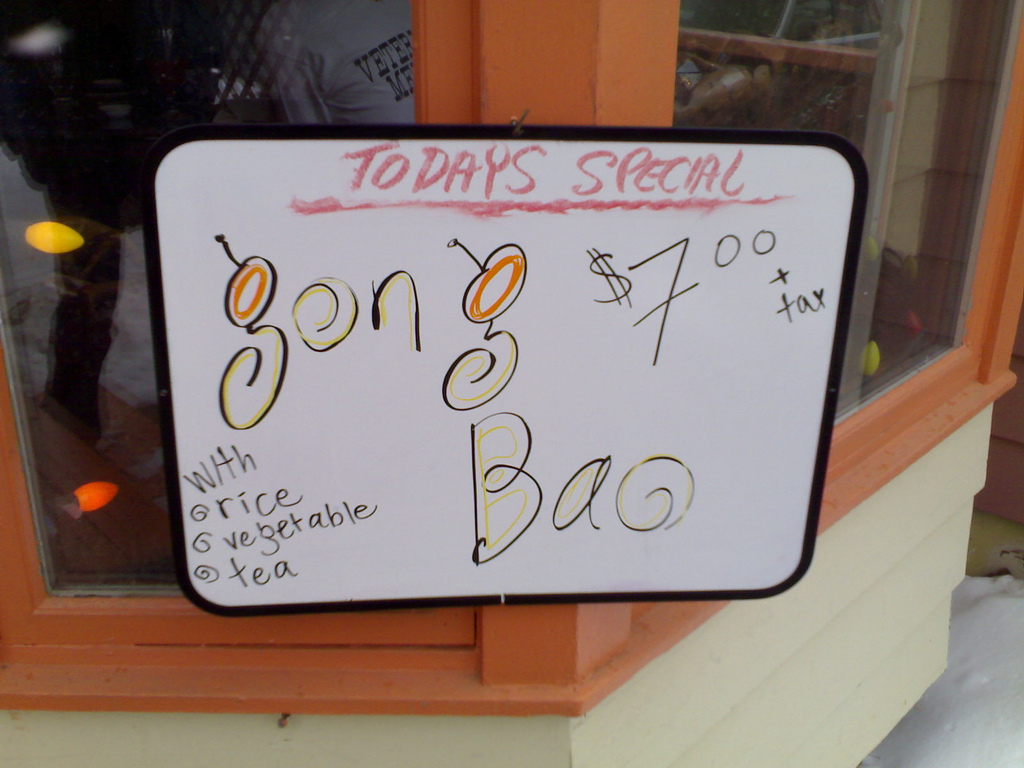 In the early days it was just a few of us, which was good because Interlude was located in a tiny intimate sliver of a space opposite the fire hall in downtown Charlottetown. If there were more than a few of us in those days we had to crowd around a small table in the very back, sitting on stools or fold-out chairs, and completely blocking access to the washroom. Here’s a shot of Dan and Steven, two of the usual bunch at the old place: 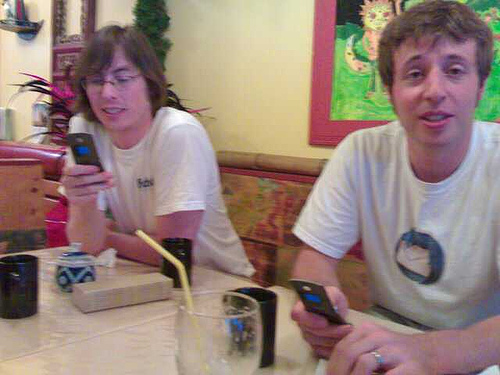 When Interlude moved to a larger space on University Avenue just north of Euston we followed, and our numbers have expanded to the point where some weeks we’ve had 10 people around the table.

The move from small-old-Interlude to expanded-new-Interlude back in 2007 took forever and we almost thought Gong Bao Thursday was done for, but, finally, they reopened: 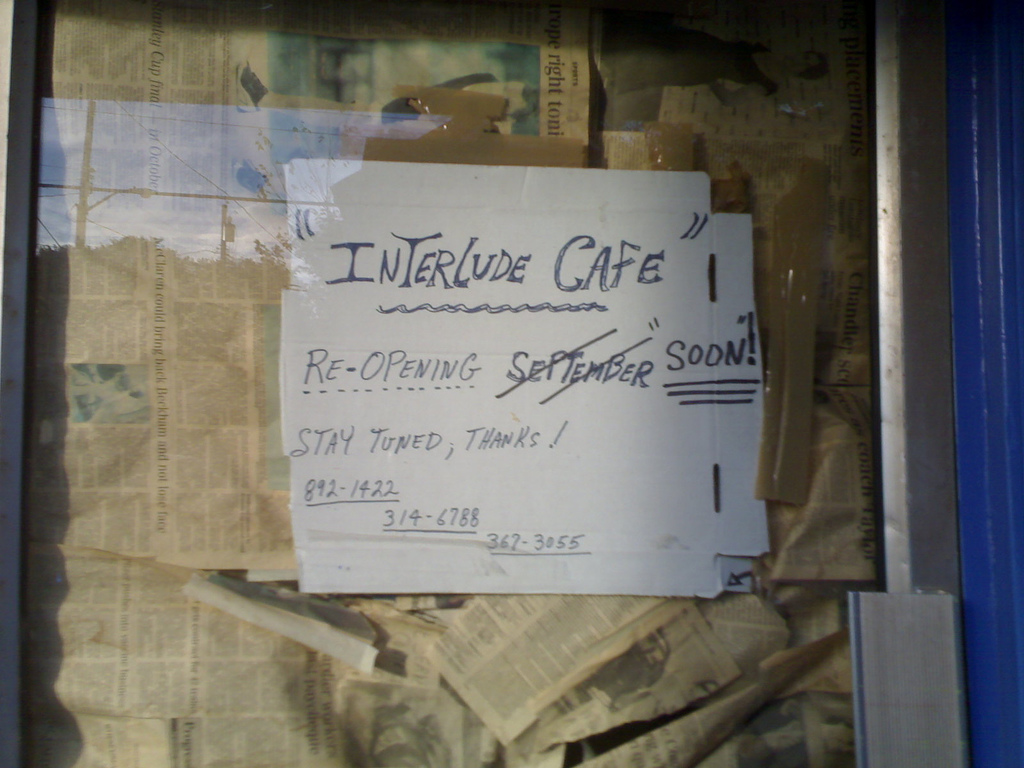 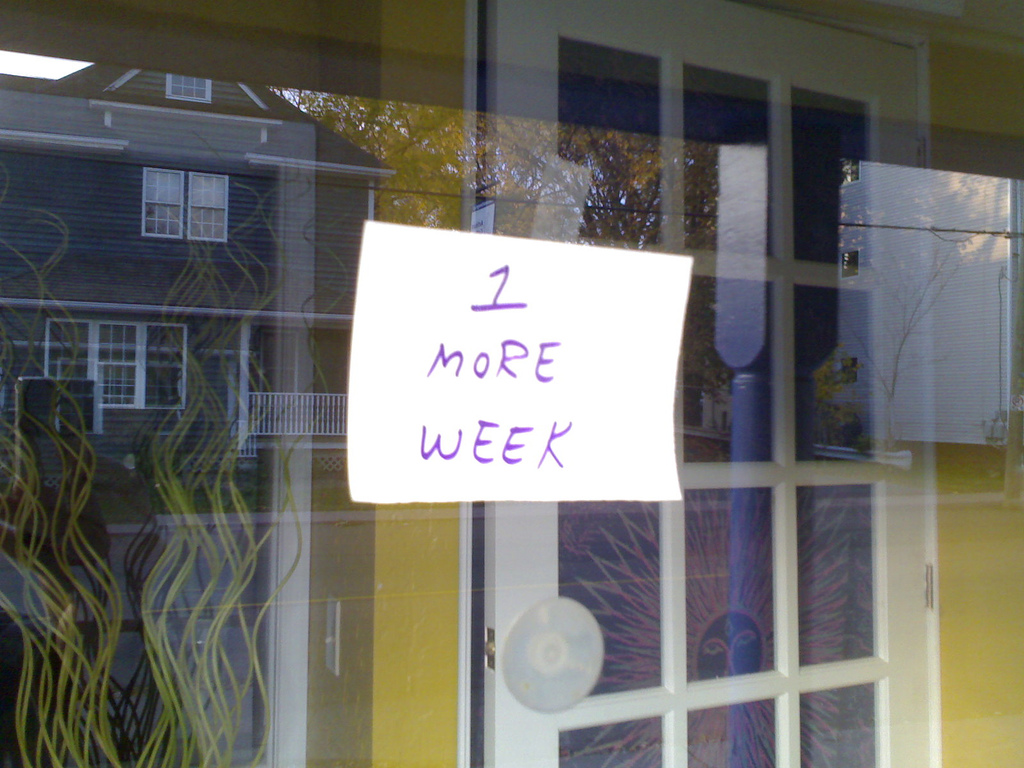 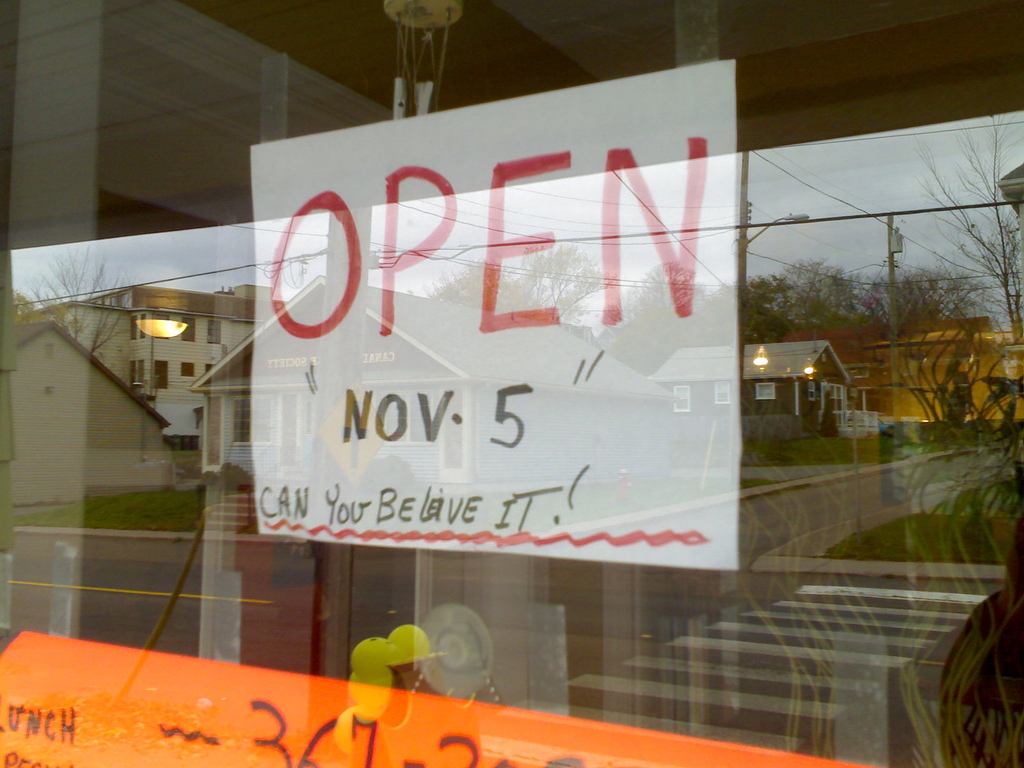 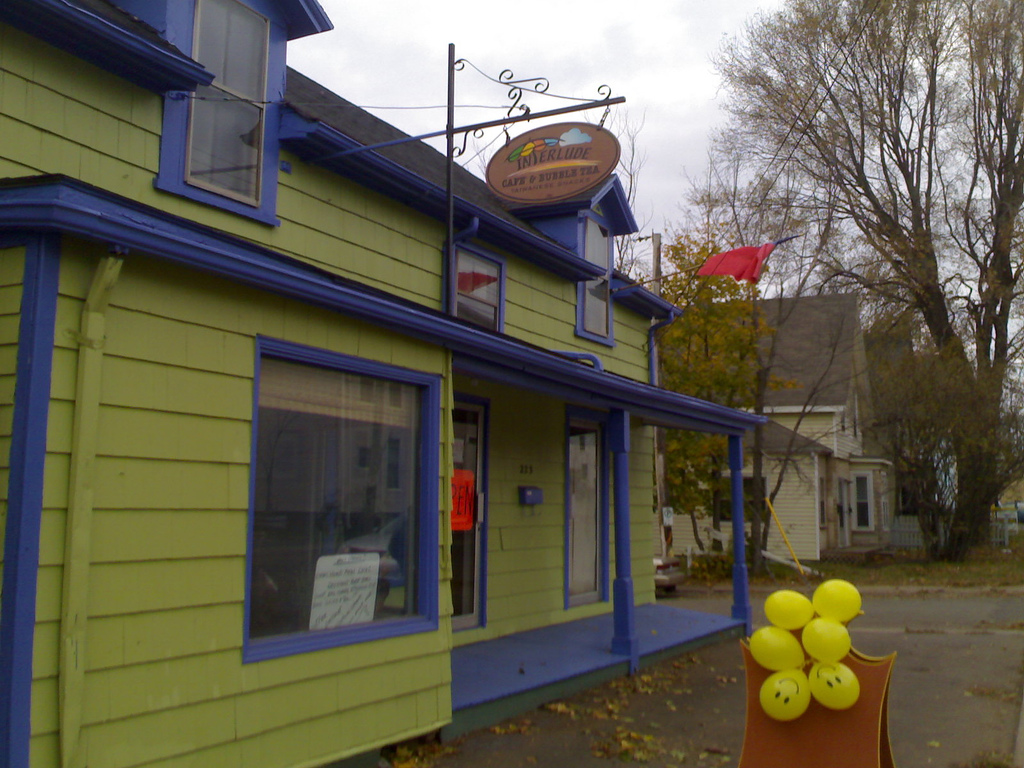 In recent years we’ve had our own table set aside for us, already set up with chopsticks, glasses of water and cups of tea, ready for our descent. In all those years Ally, personable owner of Interlude, reports that there was only a single week where nobody showed up for Gong Bao Thursday.

Gong Bao, for the uninitiated, at least as made at Interlude, looks like this (photo by Dan James): 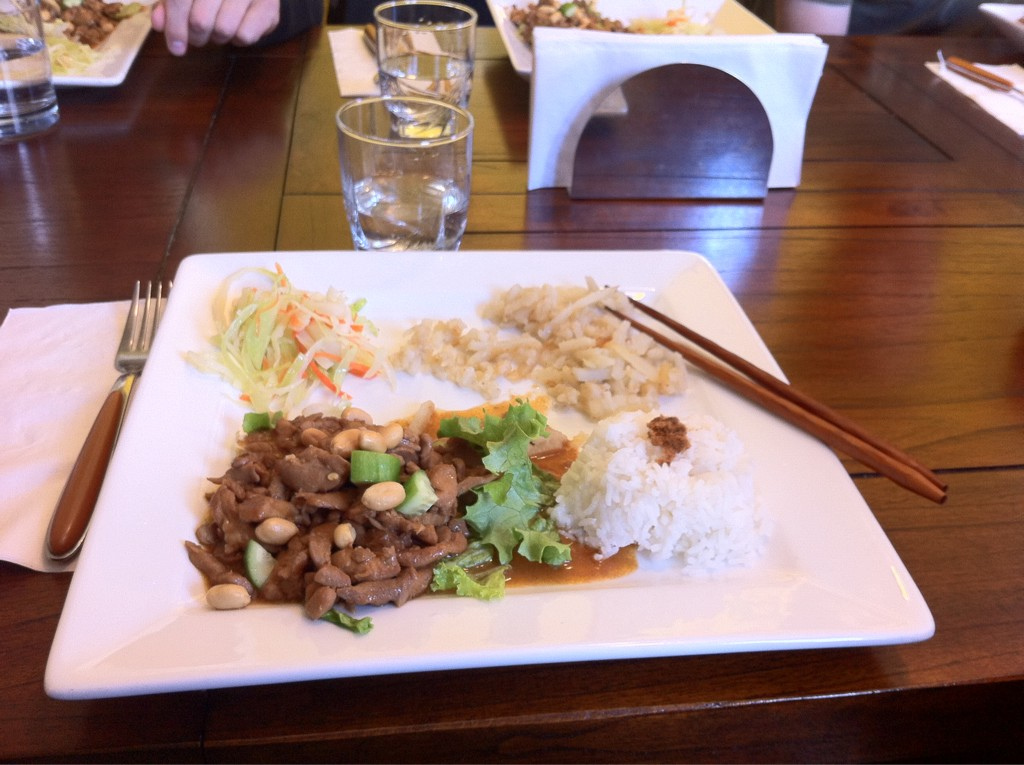 It comes on a big square plate, and is a meal of four parts: spicy chicken over a bed of lettuce sprinkled with peanuts, steamed rice with a dollop of shaved pork, warm potato salad and a cabbage salad. The meal includes a cup of jasmine tea and a glass of water. Before tip it costs $9.82.

Gong Bao was just Gong Bao in the early years, but then at some point Ally started offering pecan pie for dessert: 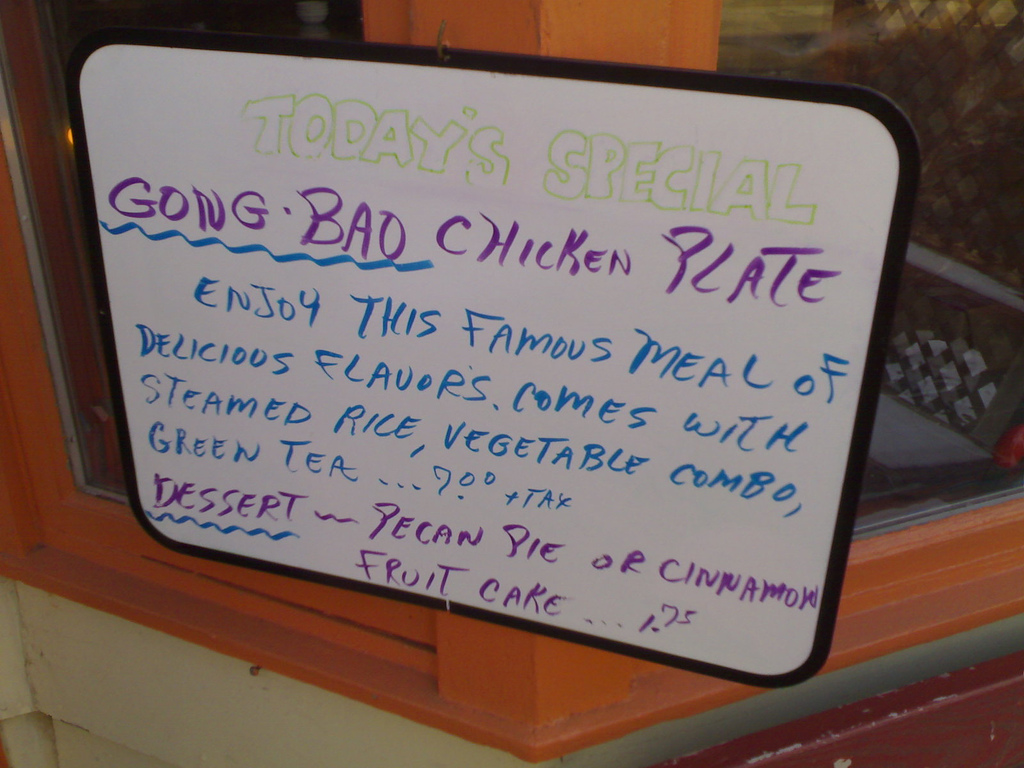 For several years the pecan pie was a treasured part of the Gong Bao ritual. And then, one day, it was gone. Allie explained this away by trying to suggest that pecan pie wasn’t sufficiently “Asian” enough for the place, and for a few weeks she tried to tempt us with novel Asian-seeming desserts. But nobody bit, and so Gong Bao went dessertless. We never quite got over it. But the power of the Gong Bao itself ensured that it wasn’t enough to break us.

After seven years our weekly appearance for Gong Bao has come to have the feel of a family meal: there are no menus or ordering involved; we just all amble in at a time coordinated by last-minute instant message (“Time for Gong Bao?”), and Ally or her partner Gary makes a count of us to know how many Gong Bao to prepare, and a few moments later the food arrives.

The biggest Gong Bao Thursday came back in the fall of 2008 as a prelude to the Zap Your PRAM conference: we invited everyone who was in town to join us as a guest star, and a lot of people showed up: 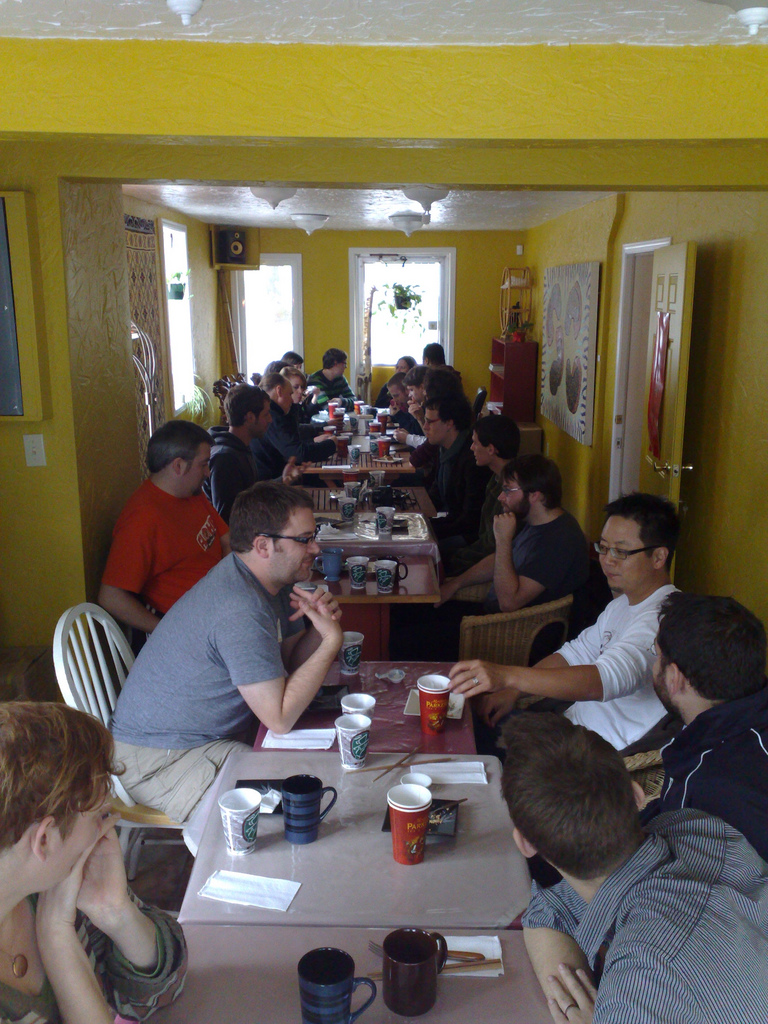 (That’s most of the people who invented the Internet-as-we-know-it in that picture).

Like every week, Ally was able to handle this flood of people with grace and a smile on her face, and the circle of Gong Bao grew ever-wider.

Until today. The Last Gong Bao.

Allie is moving on to new pursuits and the Interlude is coming under new management as of November 1. While it’s possible that the new owners will serve Gong Bao too, today was really the “last Gong Bao” in the traditional sense, especially for those of us averse to change of any sort.

So, thank you to Ally and to Gary and daughter Teresa (who was, I think, only 8 or 9 when we first started) and to all the servers who’ve served us over the years: you will be missed. As will the tasty Gong Bao. 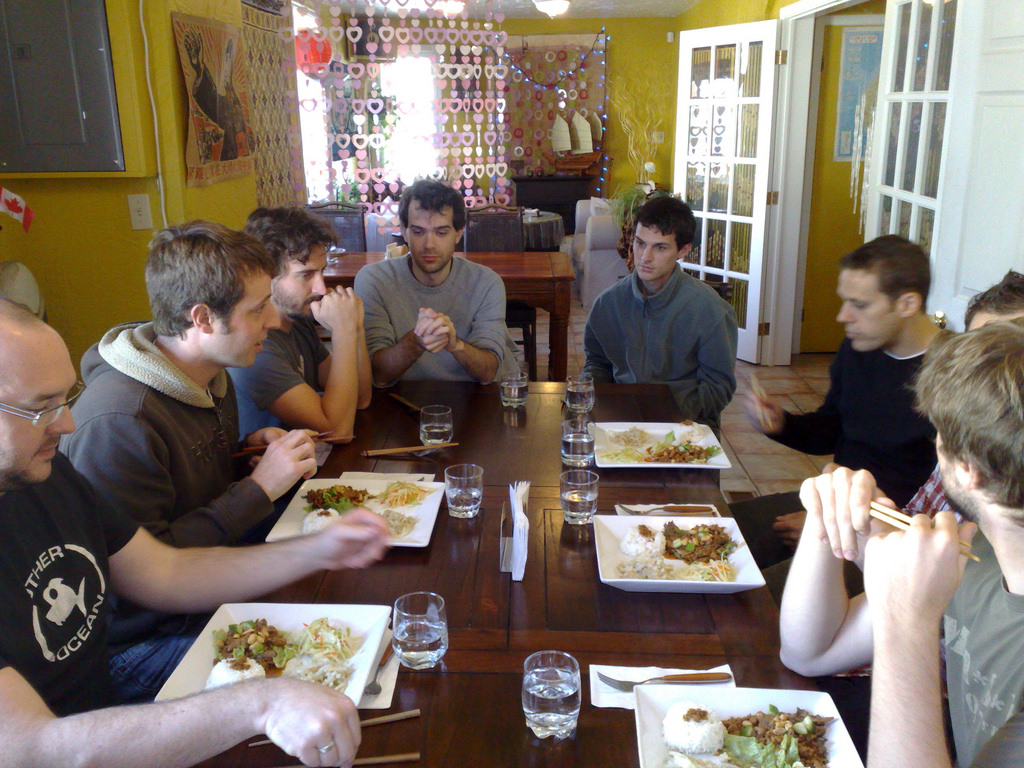 I’ve been privileged to be a “guest star” once (missed it a second time when it was closed during the move) and hope that the new ownership proves receptive enough that you guys keep the tradition alive — at least long enough for me to attend again one day.

Though an infrequent guest star (I haven’t always had the knowledge or energy to keep up with the pithy “inside-baseball” style tech-related banter and often felt as though I needed an interpreter), I’ll miss the gong bao. For me the secret was the potatoes, which had a delightful french-fry-ish quality.