Ten years ago I was an active and enthusiastic Nokia fan: I’d purchased a Nokia N95 in April (at the time, the cat’s pajamas of a mobile device), Plazes, which I was doing some contract work for, had just been purchased by Nokia, and Nokia was doing interesting things with maps and other web services. If you were interested in mobile devices and the web, Nokia was it.

Starting on July 10, I switched from posting photos on Flickr to, instead, posting them on Share on Ovi, both to support the home team, and to allow me to experiment with writing code that integrated with Ovi services.

Six months later, in November 2008, I moved back to Flickr.

Nokia subsequently shut down its Ovi services after its acquisition by Microsoft, and as a result of this, the photos I embedded in 52 blog posts here are missing.

Starting on July 10, 2008 with Interlude Open on Saturdays and ending on September 28, 2008 with Sneaky Ghost Cats, Nudity, etc., there are grey holes where the images should be, like this: 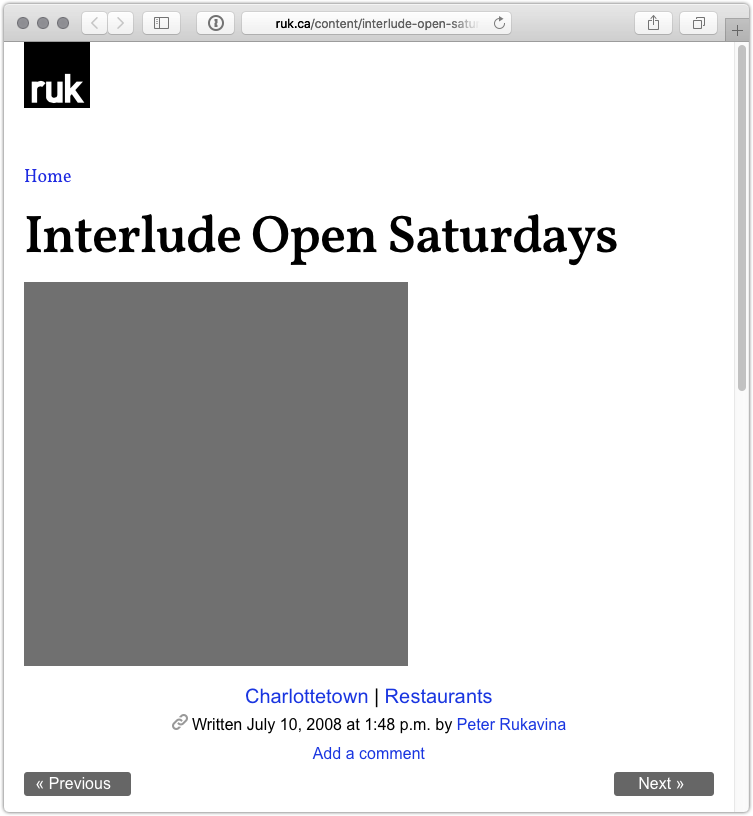 My reason for moving to Share on Ovi prompted me to think about the resiliency of my photo storage routine; as I wrote on July 11, 2008 in the post Decentralized Social Photo Management?:

Recently, though, I got skittish: when faced with the notion that, if Microsoft were to acquire Yahoo!, my photos would be part of an evil empire, I started to think about alternatives. My experimenting with Share on Ovi, Nokia’s social photo alternative to Flickr, only reinforced my misgivings (I like Ovi, especially the one-click upload from my phone, but it suffers from the same “walled garden” qualities that Flickr does).

Which got me thinking: is it necessary to store and manage the actual bits of my photos in the same place as my photos exist as social objects? While it’s obviously in corporate best interests to have the two wedded — there’s nothing like photo-lock-in to build “customer loyality” — it’s not necessarily in my best interests, no matter how enlightened the outsourcer or rich their community.

Ironically, given what I wrote then, Flickr’s still here, and Share on Ovi is long gone.

It’s been a while since I embedded photos where from third-party services. This is partly because of privacy concerns–Flickr started including a bit of tracking JavaScript with its embed code a few years ago–but mostly to address the resiliency issues I’d been thinking about for more than a decade.

Unfortunately it looks like there’s no easy way back from the dark ages that resulted from Share on Ovi’s demise: the site wasn’t archived by the Internet Archive. I likely have the photos themselves stored locally, though, and by going through each of the 52 blog posts in question and figuring out which photo should go where, I should be able to recreate the posts.

In the meantime, though, it’s all a helpful cautionary tale about the dangers of relying on “free” services to provide essential roles of a personal publishing regime.

I still use embedded Flickr images but I strip out their script and other mark-up.

the answer is YES ... AND and/or POSSE :-) but you know that already (and your own distributed decentralized peer to peer cloud including photos) #iHaveNoIdeaHowToGetToYesAndDistributedDecentralizedButWeWillGetThere