We’re installed at our apartment in central Reykjavik (it’s exactly as described: central, bright and nicely furnished — it’s also much less expensive than a small hotel room and 3x the size).

After an excellent trout dinner cooked by Catherine (she thinks it was trout: our local fishmonger didn’t speak English, and the best Catherine could get was that it was a fish that swam in a river) and some TV (Rachel Ray with Icelandic subtitles!) we all fell fast asleep.

This morning after a quick breakfast of muesli and Skyr (“a remarkable dairy product unique to Iceland”) we walked around the corner to the tourist information centre to pick up a Reykjavik Welcome Card — 1,700 kronur for 48 hours worth of public transit, museum admissions, and access to public pools.

After a quick coffee we immediately put the cards to use by walking up Laugavegur to the Hlemmur bus station to catch bus #19 out to the Reykjavik Zoo & Family Park.

The Zoo, more “farm” than “zoo” to be true, was obviously in its off-season mode: almost deserted, many animals off on vacation or otherwise hidden, and most of the “family park” shuttered for winter. There was a tiny temporary science museum; this delighted Oliver, and it was certainly the highlight of the visit. It was standard stuff from the Exploratorium play-book, some of it was broken, and the space was dark and uninviting; fortunately Oliver is easily impressed. 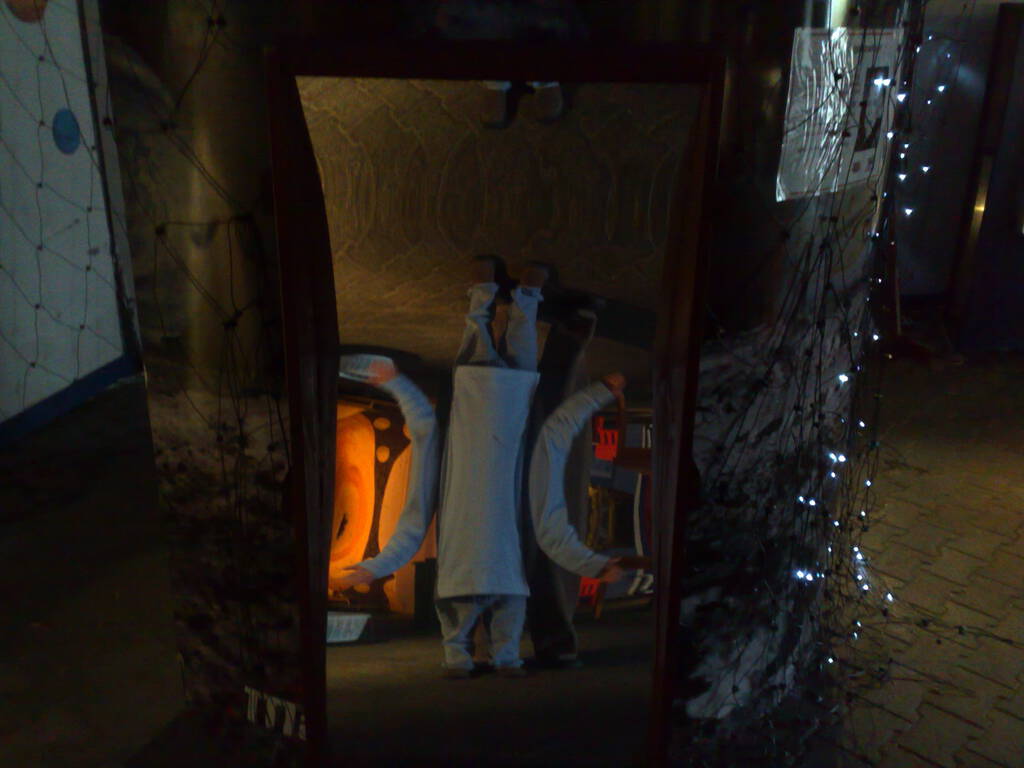 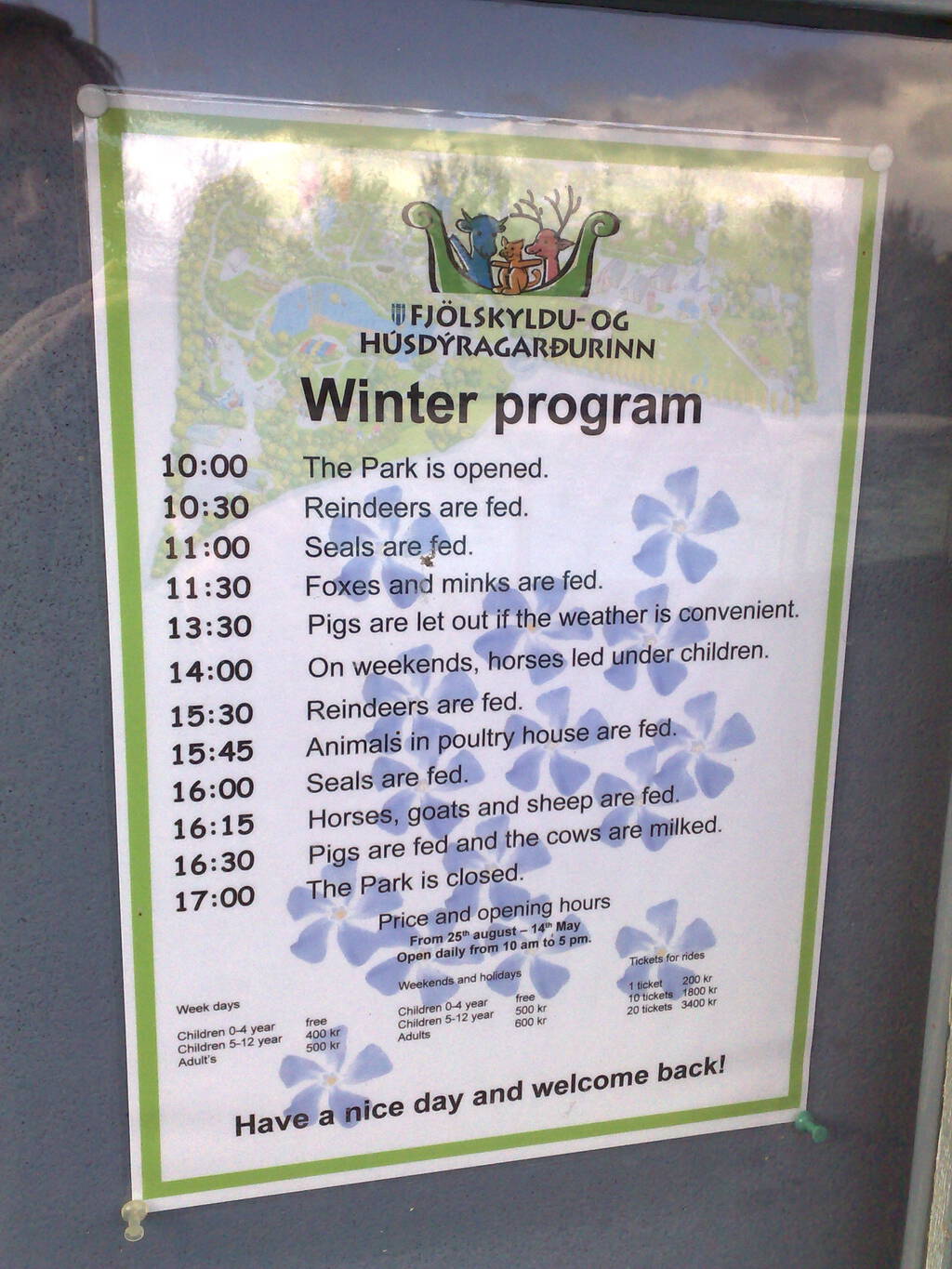 From the Zoo we walked out along the Botanical Garden and past the sports stadium and the Laugardalslaug pool and caught bus #14 back through the downtown and out to the port to see the Reykjavik Maritime Museum. Oliver is a maritime museum veteran, having visited them in Halifax and Genoa before; this one didn’t add much to the experience: your standard ships models, tales of the hard life at sea, pictures of dried fish, etc. The best part of the museum is its recreation of a wharf scene, complete with realistic-looking dock workers; otherwise, we wouldn’t have minded giving it a pass. 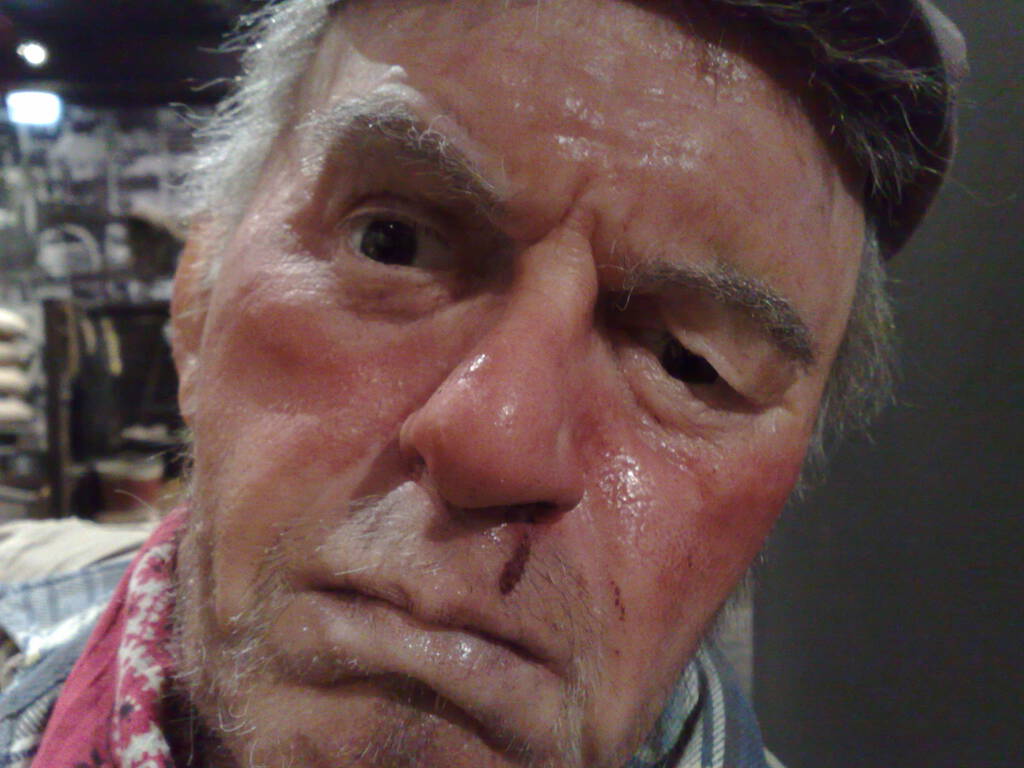 By now it was mid-afternoon. We debated going to yet another museum — the 871±2 was right around the corner — but we opted instead to take advantage of the open stores to do a little shopping. Although my eyes danced with visions of exotic Cintamani outdoor-wear, it was not meant to be: I have neither the physique nor the wallet to support it. Catherine, however, succeeded in finding some raw fleece from Icelandic sheep at the Handknitting Association store around the corner, she was very happy.

After a quick stop back at the apartment we suddenly realized that it was getting late in the day and we jumped into action to assemble our packs with necessary gear to go swimming. We decided to go back out to Laugardalslaug, the pool we’d passed earlier in the day. Bus #14 would have taken us right to the door, but we missed it by 2 minutes; fortunately bus #12 stops a block away, so by 6:15 p.m. we were walking in the front door.

To imagine what Laugardalslaug is like (assuming you live in PEI), take the CARI Pool and then quadruple it in size, add a competition pool outside, with grandstands, and, also outside, an expansive 1 metre deep children’s area beside two large round hotpots that can hold 20-30 people each. Add in a fitness centre, restaurant, sauna, steam bath and hot dog stand. Oh, and an 86-meter-long water slide.

As detailed on the offical tourism website, using the public pools in Iceland involves some strict rules: most notably that you must get undressed, walk to the shower without your bathing suit on, shower thoroughly with soap, and only then suit up and head out to the pool.

All this nudity makes perfect sense, but it does cause issues for some. I’m an old hand at the nakedness — when I first joined the YMCA (when I was Oliver’s age) the “M” meant Men’s and we all showered naked (the men actually swam naked). Oliver is nonplussed by nakedness of any sort, so he was happy to follow along (he didn’t like the showering part, but that was his regular shower-aversion).

My only fault along the Soup Nazi empooling routine was forgetting to leave our towel in the rack provided in the shower room — I took it out to the pool with us, realized that nobody else had a towel, and quickly ran back inside before it was too late.

The pool itself was Maximum Fun: we lolled about the outdoor shallow kids’ pool with lots of other families, playing catch, hanging on to floating dragons and enjoying the warm water (more pleasant still when you looked at the outside air temperature of 8 degrees C flashing on a display).

I’m not a waterslide kind of guy — or so I thought. I had to give it at least one go, and it was so much fun that I did it five more times in a row. It’s a little cold climbing up the concrete stairs — sheltered from the wind but not from the cold concrete. Once you’re hurtling down the slide, the sheer terror of it all negates any effects of the cold, and before you know it you’re plunging into a warm pool of water at the bottom.

Oliver was unwilling to attempt the Big Slide (probably wise; he might have been scarred for life), but he did take a go at the Little Slide, a huge leap of bravery for him, as he’s slide-averse on dry land at the best of times. Coming down the slide I saw as close to a look of unmitigated panic as I’ve ever seen on his face, but Catherine caught him at the bottom, and although he didn’t want to go again, he seemed happy at the accomplishment.

After about an hour, and a soak in the hot pot, we headed back into the locker room to reverse the nakedness procedure, the Big Rule on this end being dry yourself off before you head out of the shower.

On the way out of the pool we noticed the hot dog stand, and Oliver, to this point free of this Icelandic delicacy, allowed that he’d like one. Catherine joined him. They seemed to enjoy the experience. Back on bus #14 we were home in 15 minutes and are now all utterly exhausted. Tomorrow we rise again…