Remember my excitement regarding Hertz Ultimate Choice, the new “pick any car on the lot!” that was promoted to me in anticipation of my arrival at Logan Airport on Sunday?

Well it turns out that this was not the “I’ll take a bright red Mini Cooper with crushed yellow velour interior” paradise that I thought it was going to be.

When I arrived in the Logan Car Rental Center and made my way to the Hertz part of the garage, I was directed by signage to the Gold area to pick a car, any car.

This area was one aisle of many, and it was populated exclusively by the opposite of the cars you’d think would be every person’s “ultimate choice.” Scads of generic Hyundai, Nissan and Toyota mid-size cars that one would buy if they were a perfectly sensible, if not particularly inspired person, who doesn’t pay any heed to fuel economy or style.

But I like smaller, more boldly styled, more fuel efficient cars, and the Gold lot contained none of these.

Back in 2015, I rented a peppy Fiat 500 from Hertz; it was that sort of car I was looking for. So I went inside to the desk to see if one might be coming into the rotation.

I was told–and I’m not making this up–that not only were there no Fiat 500’s on the lot, but that even if there were, I wouldn’t be eligible for one because I’m a Gold member, and Gold members, it seems, can only drive big cars, midsize or larger.

Reconciled to a life inside the mundane gold prison, I went back to try to find the best of the worst. I tried a few cars on for size: a Kia Soul, a Jeep, a Nissan. But none made my heart sing.

Seeing me get out of my third car in a row, a Hertz employee asked me what was up and I told him I was looking for something smaller.

This seemed odd to him: Gold members get to drive big cars. You’re supposed to want to drive a bigger car. Why would I want to deny myself this pleasure?!

Nonetheless, he told me that I could walk to the opposite end of the Hertz lot, to the non-golden peasant section, and pick whatever car I liked.

So that’s what I did.

I found three models of car left: Toyota Echo, Nissan Versa and Ford Focus. I’ve rented Fords from Hertz before, and while they’re not the cars of my dreams, they’re solid, comfortable, efficient and well-equipped, so that’s what I ended up with: 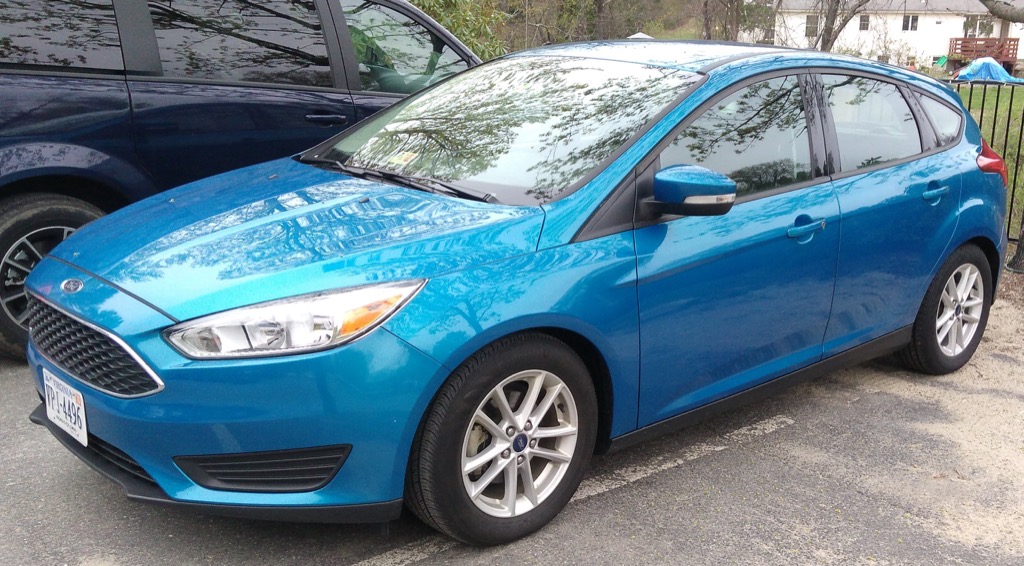 I got myself sorted, and headed toward the exit booth for the paperwork, showing the agent my driver’s license as requested.

“That’s not your car, that’s Anthony’s car,” said the agent. “Hold on a second.”

The agent phoned into the office; there was a question about whether I was allowed to drive away in “Anthony’s” Ford Focus.

It was decided that another car could be found for Anthony.

And I was on my way.

The Ford Focus has proved an entirely adequate car. It does not enliven my spirits, but it does not dampen them either. And it got 40 miles to the gallon on the trip up to New Hampshire from Boston.

Hertz Ultimate Choice is a bust, though. Both because it offered me the pick of an ugly litter, and because it reinforced that “bigger and more guzzling the better” is still too much a part of the American dream.