The fates conspired against me for my prideful “it’s not so cold here and I’ve fixed the dishwasher” post yesterday by arranging for our furnace at 100 Prince Street to stop working.

Everything was fine when we got up Saturday morning: a pleasant 19ºC. Oliver and I headed off to the Charlottetown Farmer’s Market and to run other errands, not returning home until mid-afternoon.

When we arrived home I noticed there was a chill in the air, the thermostat was showing only 17ºC, and the radiators were stone-cold.

I tried the pilot light reset switch, and there was something of a springing-to-life, but although the furnace appeared to be running, there was no hot water circulating, and the water temperature gauge on the furnace remained at about 30ºC: 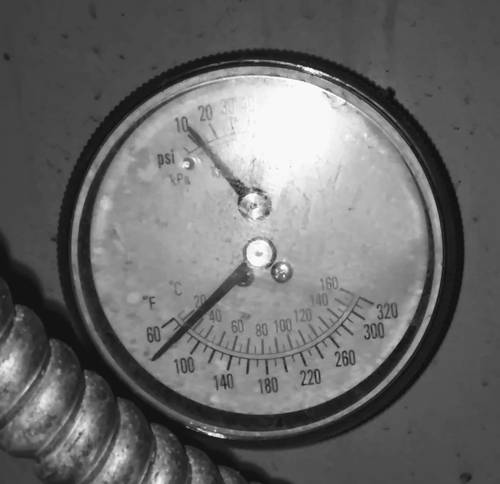 At this point, going into a long-weekend and facing very cold temperatures overnight, I placed a service call to Kenmac Energy, the first time we’ve needed to call in their cavalry since we switched from Coop Fuels in late 2015.

Kenmac proved very-responsive, with a helpful person on the other end of the phone who walked me through most of the basic things I’d already tried, and, none proving successful, promised to have a service technician at our door once they were finished with other calls.

About an hour later there was a knock at the door, and a very friendly and accommodating technician presented himself, got the details, and headed down to the basement.

About 20 minutes later, the furnace sprang to life, hot water started to fill the radiators, and the house started to heat up.

I wasn’t paying enough attention to get the specific details of what had conked out, but it was something like two electrical “control boxes,” if memory serves.

After a brief chat with the tech about his 40 years inhabiting the basements of Charlottetown, he was off to his next call, and we were off to run some more errands, and to grab pizza at Casa Mia for supper.

When we returned home at 8:30 p.m., the rads were still warm, but the temperature was only 18ºC, despite the thermostat being set to 20ºC.

I ran the same set of checks, only to find that, this time around, even the burner wouldn’t start.

Another call to Kenmac’s after-hours line, where I spoke to the same helpful person, who promised to dispatch someone soon; about 10 minutes later I had a call from the same service tech who’d visited earlier, and he sent me down to the basement to gather a sit-rep, and when nothing obvious presented, said he was on his way.

He arrived a short while later and headed back into the basement, emerging about 45 minutes later with the news that one of the control boxes he’d installed earlier had inexplicably stopped working. He’d replaced it, and then ran the furnace through several off-and-on-and-off cycles to make sure it was working as it should.

When I went downstairs to review the situation, I found the temperature gauge in the expected 90ºC range, and all the pipes hot to the touch: 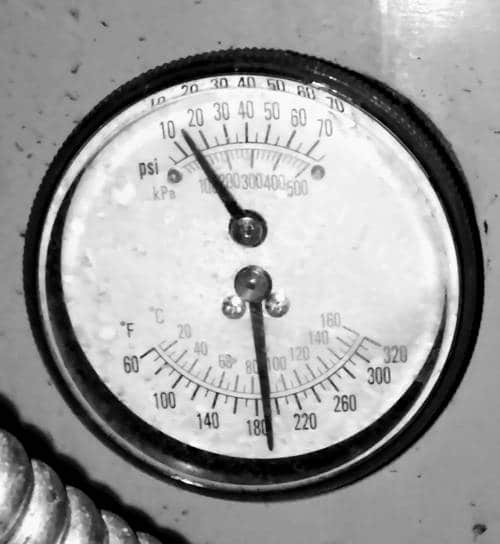 I’m happy to report that when we woke up this morning, the temperature was again a a pleasant 19ºC, despite the -19ºC temperature outside. The rads were toasty and all was well with the world.

There’s nothing like having your furnace stop working to remind you how lucky you are to have a furnace.

I am glad not to have to worry about things like that, leaving it to the owner of the house who is a very efficient person.