Night after night after night, while the rest of us are watching Seinfeld or helping to bathe the wee ones, or going to the beach or shovelling the snow, the indefatigable Derek Martin has been operating City Cinema in Charlottetown (conflict of interest note: I have been voluntarily maintaining the website for the cinema since 1995).


For one heady week a few years back, I filled in as projectionist for Derek, and it was only then that I truly learned what a completely exhausting business running a cinema is. From the comfort of the seats in the front of house, we see little of the lugging giant heavy film canisters to and from the bus depot, winding endless thousands of feet of film from small reels onto big reels, dealing with popcorn machines that light on fire. And so on and so on.


In a climate where many small cinemas have folded (Wormwoods in Halifax and the Broadway in Hamilton since Dererk has been in business), we all owe Derek a large debt of gratitude for keeping at it night after night.

I have never been a tremendous fan of muffins. Over the course of my life I would say that 2% of the muffins I’ve eaten have been transcendent, 50% have been mundane, and the remaining 48% have been some variation of dried sawdust and lard baked in adobe ovens for 14 hours.


The muffin world is unfortunately fractured between those that treat muffins as the centre of their world and those that class them aS generic baked goods (along with tarts and pies and cakes).


For some reason, neither model seems to produce appetizing muffins.


The former, assigned to life in the doldrums of muffindom, try to bust out of their shell with with muffins like Cherries n Chocolate and Tropical Pineapple Crunch. Ack!


The later, treating muffins with only occasional interest, vacillate between the sawdust-variety bran raisin, and items which contain so much sugar and syrup that they’re more a dessert item than a healthy breakfast aside.


Despite my misgivings, this morning I awoke and set out with wee Oliver to see if muffins could be obtained to take the edge off an early Sunday morning. I needn’t have bothered.


It would appear that even though we have World Class Ways of Getting Here and World Class Tourism Attractions, there is either no demand for Sunday muffins among the tourist class, or there is demand, but it is going unslaked.


In final desparation, wee O. and I piled in the car and drove to Tim Hortons where I found a lackluster low-fat raspberry muffin. Not great, but it was a muffin.

I came across this news release on the Tim Hortons website tonight. It discusses the construction of a $125 million par-bake facility in Brantford, Ontario.


What, I wondered, is a par-bake facility?


Well, it seems that if you want to bake lots of bread in a giant factory, and then ship it out across the land, it’s better to partially bake it than to bake like any normal person would (i.e. all the way). According to The Pillsbury Company:


With this new technology, Pillsbury factory [sic] now bakes products until they are about 90 percent done and then ships the products to restaurants or other establishments, which merely have to heat it [sic] up in order to ‘fresh bake’ it [sic].

What I am wondering is: if you’re “merely heating up” some previously par-baked bread, is the end result really “fresh-baked?”

All sandwiches are built on a choice of a fresh-baked white or whole wheat country bun, with tomato, lettuce and our special creamy dressing.

(emphasis mine). Will this change when the partially-baked bread is trucked in from Brantford? If I make some soup today, and then put it in the freezer and heat it up tomorrow for lunch, is this “freshly made” soup? We’ll have to wait until the bread trucks start to roll; somehow, though, I think that “choice of re-heated partially baked bread made in Brantford, Ontario” doesn’t have the same cachet.

ER star Goran Visnjic is introduced in this interview as a studly Croat. This would appear to be the first time that a Croat has ever been described as being studly (at least in English). For the 1/4 of me that is Croatian, things are obviously looking up!


For the record, it also appears that studly Ukranian nor studly Irishman have warranted Internet reference; to complete my ancestry, however, studly Scotsman has at least one reference:

I committed a Major Social Faux-Pas when I asked Jimmy, our studly Scotsman, to pick out the best whisky they had and serve it to me OVER ICE. Needless to say, I now drink it sans rocks.

As you might imagine, there are more references to study Canadian and studly American.

I was sad to see that Sam the Record Man is out of the online retailing business. While their site was never the cat’s pyjamas, it was the presence of Sam’s in Prince Edward Island after they closed their only retail store almost a decade ago.

The Price is Right expanded from a 1/2 hour to a 1 hour format in November of 1975. The frightening thing is that I remember this switch like it was yesterday, and it has as much resonance for me as Nixon’s resignation or any of the other major events of the 1970s.


One interesting fact we learn from the The Price is Right website is:

What are the grounds for a game being retired?
Games are retired because they dont seem to spark the same enthusiasm of other games.

This in contrast to those games that incite widespread pandemonium, I suppose. Apparently there have been other changes at TPIR:


Due to Pearson Television’s acquisition of Goodson-Price Productions, Pearson has implemented creative changes to The Price Is Right, which will enhance the long-running series… A search for new models is underway and although Janice Pennington and Kathleen Bradley will no longer appear as “Barker’s Beauties,” they are expected to continue their association with Pearson Television through new projects under development.


Janice Pennington has been a model on the show since 1972. She was “Playboy Playmate of the Month” for May 1971.


Kathleen Bradley has been with the show since 1990.

Anne’s reaction to Matthew’s death in Anne of Green Gables:

Anne hoped that the tears would come in solitude. It seemed to her a terrible thing that she could not shed a tear for Matthew, whom she had loved so much and who had been so kind to her, Matthew who had walked with her last evening at sunset and was now lying in the dim room below with that awful peace on his brow.

From a story about the demise of WebVan and the auction of its assets:

Joanne Taylor said the auction was a sad event for her family. She spent $3,750 for a freezer designed as a Webvan truck as a birthday gift for her 2-year-old son, who became enamored with helping the company’s drivers unload the family’s groceries. “He still asks when is Webvan coming?” said Taylor, who shopped with the company twice weekly. “He doesn’t understand they’re not coming back.

The following sign is posted on the door of the East Point Lighthouse Craft Shop in East Point, PEI: 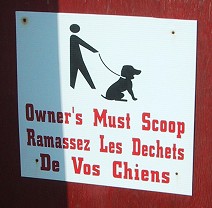 English: Owner’s Must Scoop (odd apostrophe there). French: Collect the garbage of your dogs.