After running up to the credit union on my regular old bicycle this afternoon, I thought I might stop around MacQueen’s to test drive one of the electric-assist bicycles they’ve started to stock. I’m intrigued by this product category, tucked between bicycles and scooters, and have wondered whether having an electric motor assisting my pedaling all or some of the time would move some of my car-driving to bicycle-riding.

The cycle they rolled out for me to test drive was an Evox City 520, equipped with a 520 Wh battery and with a range of 65 to 95 km (depending on whether you’re in “pedal assist” or “throttle” mode). This is what it looked like midway through my ride: 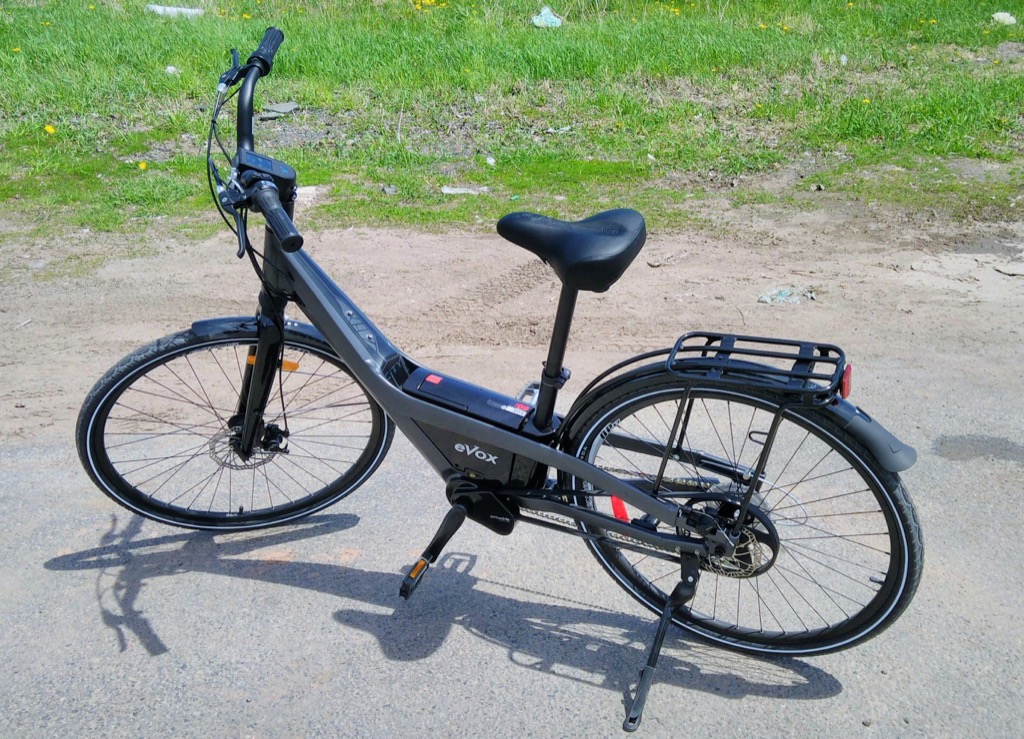 I took it out for what ended up being an 8.6 km ride, over from Queen Street to the Confederation Trail, out past UPEI and the Charlottetown Mall, and then back down to Belvedere Avenue, up to Queen, and back down to MacQueen’s. It took me 25 minutes, and for most of that time I was flying along at the bike’s top speed of 32 km/h.

The battery and electric motor is located right above the pedals, and the motor uses a belt-drive to power the back wheels, leaving the chain to operate as it normal would. The controls on the bike are simple: there’s a centre-mounted digital display that shows speed, distance traveled, battery level, and mode (pedal assist or throttle): 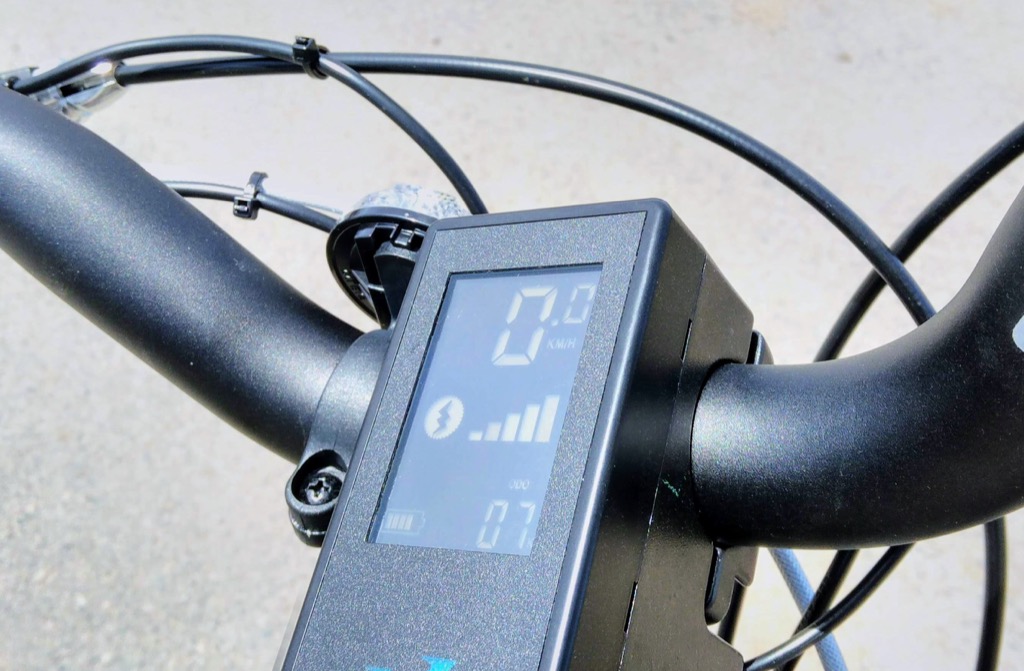 On the left-handlebar is a gear shift integrated into the hand-grip (with 8 gears) and, to the right of that, a 3-button controller. The bottom button controls the mode, the upper buttons allow the amount of pedal assist to be raised and lowered: 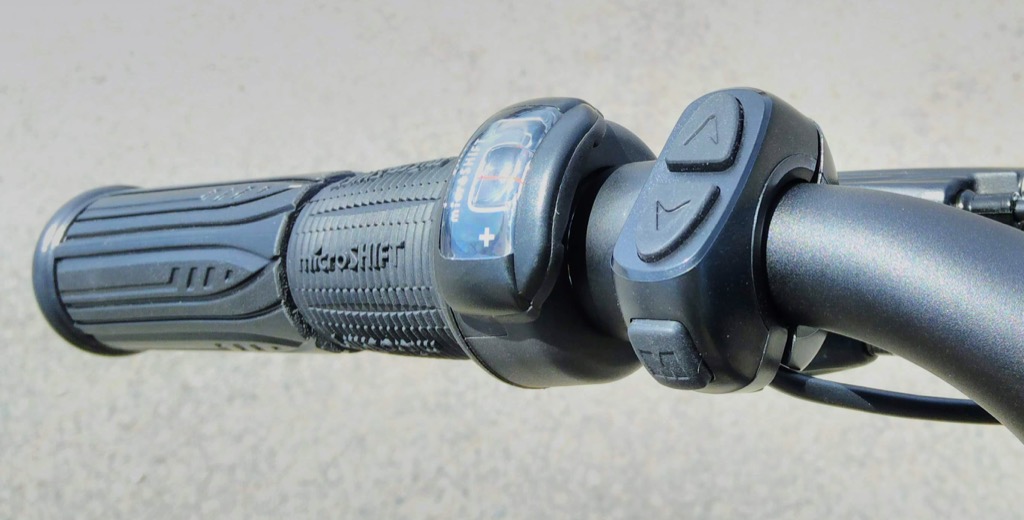 There are two modes.

The “pedal assist mode” makes pedaling up to 300% easier: it feels very Steve Austin, as though you’ve suddenly gained incredible strength, or are cycling on the Moon. It doesn’t kick in until 3 km/h is reached, which makes a standing start from a high gear a little tricky. But once you’re moving it seems like the most natural and amazing thing in the world.

The “throttle mode” turns the right side hand-grip into a motorcycle-like throttle: the more you crank it, the faster you go; you need not pedal at all. This turned out to be a lot less awesome than I anticipated: you quickly realize you’re on something more like an under-powered scooter, and while I can see it being occasionally useful, I wouldn’t see this mode as a must-have. It lacks all of the Bionic Man thrills of pedal assist.

The best thing that cycle shops can do to sell electric bicycles is to encourage customers to arrive on their “legacy” bicycle and then go on a test drive: once I was done with the test, riding my trusty old non-assisted bike seemed like riding on Jupiter, and I wondered why anyone would ever choose to slog it out without a battery and motor sharing the load.

Of course there are a few good reasons why not: the Evox with the 520 Wh battery retails for $3199, which puts it well outside of the range of most cyclists, including me.

But even if one has a wallet bursting with cash, there’s a more spiritual consideration to make: is electric-assisted cycling “cheating,” in the sense that the amount of physical fitness it involves is diminished? My body still worked a little to get out to the mall and back, but that work was a pale shadow of the work it would have done if I hadn’t had the motor.

That said, I probably wouldn’t have ridden 8.6 km at all without the motor, and that’s my best chance for rationalizing an electric bike: it’s not “easier cycling,” it’s “less car driving.” It’s a rare day that I’d do anything but hop in the car if I needed something from Canadian Tire; I wouldn’t hesitate to take the electric bike, however: it would be almost as fast, much more fun, and I’d get some fitness benefit while, at the same time, using greener energy to power myself there and back.

While the $3199 price of the Evox bike is too rich for my blood, MacQueen’s also sells a less expensive model from the (unrelated) Danish Evo cycle maker, that’s $1000 less expensive, and you give up throttle mode. I didn’t test drive one of those, and $2000 still ain’t cheap, but it puts it into the realm of possibility.

Years after the Segway was going to turn urban moving-around on its ear, it seems like we’re on the edge of a revolution that involves ebikes, scotters, and electric cars; I’ve a feeling that, one way or the other, the way I’ll be moving around the city in 5 years will be a lot different.

The first time I encountered an e-bike was years ago when cycling to the city center with strong head winds and getting overtaken by what seemed an over 80 yr old man.

E-bikes are more and more common here. Still pricey (E1200-3000), but used by all age groups. For elderly as additional strength, as it keeps them mobile longer than otherwise possible (although the number of cycling deaths has increased from elderly falling over with their e-bikes). For teenagers as range extender (I had plenty classmates cycling 10-20km one way to secondary school e.g.). For others as replacement for shorter car drives.

Since we moved to Amersfoort, we're about 8km from the city center. Back in Enschede it was about 2.5 and we cycled or walked it mostly. At 8km we find we take the car a lot more (also because of our 2yr old). We've been looking at e-bikes because of it, to cycle to town more often instead of driving, and as range extender to the nearby beaches of the IJsselmeer (15km or so). As our daughter grows the added weight on our bikes transporting her also likely is a factor (I totally get it when a parent taking 2 kids on his/her bike to school e.g. has an e-bike to help out, in headwinds, rain and on inclines.)

I feel those 'cheating' aspects you mention too, esp when I see someone not pedalling at all on a flat stretch in nice weather. :)

For now the amount of money involved will flow to other priorities. The price difference between regular bikes (also easily 1200-1500E) and e-bikes is slowly getting smaller. It is noticeable from the amount of e-bikes around (up to the point that my bike repair man calls my bike 'your rail way station bike' disapprovingly, assuming I have a gleaming stallion of a bike as well for cycling when parking it and getting it stolen is less of a risk)

Something I haven’t seen a lot of development on is electric bicycles intended for moving more than one adult. As the father of a non-cycling young adult, this is an area I’m very interested in, and I suspect I’m not alone.

We see quite a few of these: https://www.elektrabikes.nl/top-5-elektrische-bakfietsen-2015/ (although meant for primary school kids, not YAs)

When we were in the Netherlands in 2014, we had the benefit of seeing an entire range of accessible bicycles–none electric, mind you–in the accessible bicycle centre at Park Hoge Veluwe. The park’s commitment to accessibility is something we should all try to emulate.

My only concerns with e-bikes are how we deal with "people powered" trails - multi-use trails like the converted railway. We've historically banned scooters and motorbikes but for some reason having pedals makes people feel they're eligible to ride there (and if they're not using e-assist, they should be.) I believe in theory these bikes are banned there, however in practice they're showing up more often than they were even 5 years ago.

Most of these trails are rated to a maximum of 20km/h and e-bikes easily enable the average rider to take bad car habits of speeding to trails where baby strollers, dogs, and kids are walking.

I've been narrowly missed on a blind corner by an e-bike twice this summer - and that did happen with "athletic" cyclists riding too fast previously, but now both are on trails that quite frankly aren't suitable for the speeds and the frequency is up. I'm loathe to suggest any sort of enforcement of speeds or anything to take people off of bikes and putting them back in cars, I just hope for a general sensibility that when the e-assist or engine is fully engaged, it's not a bicycle anymore and should ride with traffic.

I believe it was the provincial level government in Fujian that mandated that all scooters be replaced with electric versions. It was interesting to see a whole large city in China moving about entirely on electric bikes and scooters of all types. Perhaps when you get this kind of scale the price of bikes like you show above will come down (it's about double the price of some I've seen where we live now).

An extremely popular alternative to bikes and scooters were "hoverboards", which were like headless Segways. Workers would ride them everywhere, from their desk onto the elevator to the restaurant, and all around the campus. It was like something out of the Jetsons except they didn't fly, yet.