When the PEI Home and School Federation was invited to provide feedback on the then-draft School Change Policy to the English Language School Board, among the recommendations submitted was one related to open data:

Provision of open digital data to aid external organizations in contributing to the process.

While the Board did integrate several of the Federation’s recommendations into the final policy, this open data recommendation was not one of them.

Now that the school change process is well-underway, the absence of this open data is compromising quality of the consultation process, most prominently in the provision of draft school attendance zone boundaries.

Many of the draft recommendations concern modifications to these boundaries, and they are, understandably, of great interest to families who will be affected.

And yet these boundaries are being communicated to the public using cartographically-dreadful low-resolution PDF maps that look like this: 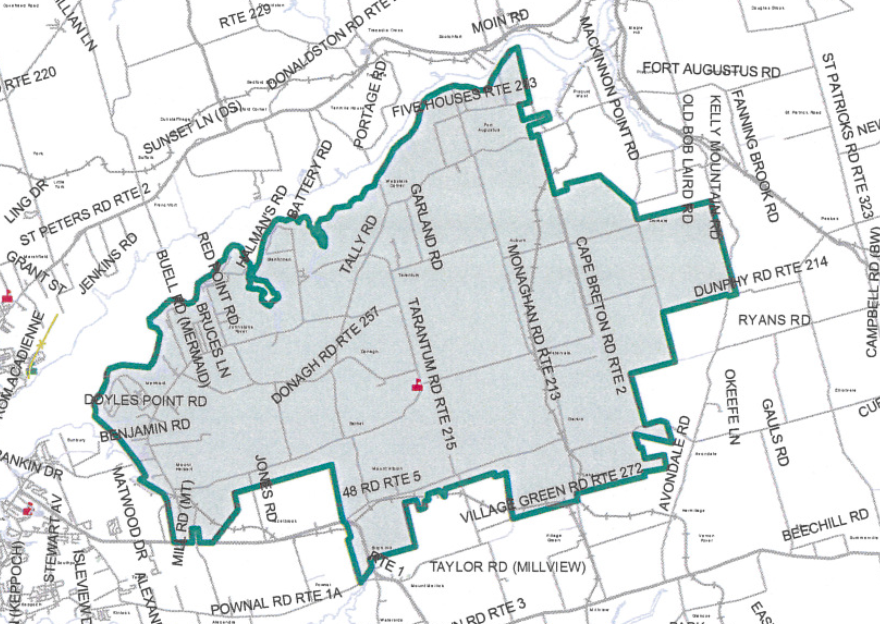 This is a clear example of why open trumps closed: there is tremendous depth of cartographic experience on Prince Edward Island, and if open map data was made available the community would be able to create maps of far higher quality and utility than these.

I spent a good part of 2015 telling public servants that “PDF are where data goes to die” and there is no more clear an illustration of this.

If you’re engaged in the school review process, and want better maps to aid better decision making, I encourage you to ask for them.

Update: Bob Andrews from Public Schools Branch got back to me very quickly in response to an email where I asked him for GIS data related to the boundaries. We had a good conversation about the possibilities and limitations of providing open GIS data. I learned that the PDF maps in the reports are created by exporting PDF files from Baragar Systems’ GeoSchool application, so the poor quality of the maps is not a reflection of local cartographic capabilities but rather a reflection of that application’s limitations.

I followed up with a call to Baragar to see if it was possible to export GIS data from GeoSchool and was told that although this isn’t built into the GeoSchool application, it’s possible for Baragar to export ESRI Shapefiles for an additional fee; they would not agree to do this, however, without an agreement that the resulting data files not be shared with the public, which makes the notion of doing this with open data in mind moot.

This is an example, thus, not of reticence by the public service to release open data, but rather a situation where a commercial third party enforces a restrictive license on data created using its software that specifically prevents the data from being released in the open. And thus, for the longer term, it’s a matter of reevaluating our software choices to those that favour open data.

It is worthwile to take a look at the contract with that software provider, and the general procurement conditions used by Public Schools branch / local gov. It is a rather odd presumption that if I create something in a piece of software I pay for and then pay someone for the transformation of that data into a different, I would release any rights to my that data to do with it as I see fit. On what grounds did they add the no-sharing condition? Are there any? Sounds to me like a blanket statement (I get them often when it comese to open data) without any actual connection to rules/contracts etc. in place, just a single person trying to not take any risks with a decision they can't oversee all consequences of.

To wit, the very first question in Baragar's FAQ:
http://baragar.com/faq/ "Will we lose control of our data if we use Baragar software? No. Not only does your District/Board/Division have control of their data, you retain 100 % ownership of your data."

As transformation into ESRI shapefiles does not constitute an original creative act the same rights apply to the resulting shapefiles as are attached to the original data. Hence, the limit on sharing seems groundless.