It has been the year of talking about open data.

It all started back in February when I was invited to present to a meeting of ARMA Prince Edward Island, a comity of public servants working in “recorded information management.” This was a “hands-on” workshop (blog | slides), and I used my work with electricity data as the jumping off point for a tour of open data technical concepts from a records management perspective.

Attending that session was Mike Fagan, Queen’s Printer for Prince Edward Island, and subsequently Mike invited me to speak to the Queen’s Printers Association of Canada at their national meeting here in Charlottetown in June (blog | slides).

For my presentation to Queen’s Printers, I reshaped my presentation to focus on open data “from a user’s perspective.” My goal was to communicate something about what it’s like to be a longtime consumer of open data, with the hopes that I could take the open data conversation beyond the realm of “you need to do this because it’s right” and, by showing concrete examples of how open data can lead to citizen engagement, show public servants how open data can improve public policy making. I shaped the talk around 7 “open data principles” based on my own experiences.

As chance would have it, my talk to Queen’s Printers was ready to go when I received a call from Gary McLeod, Chief Electoral Office of Prince Edward Island wondering if I might present on much the same topic to Chief Electoral Officers of Canada at their annual meeting, to be held in Charlottetown in July.

I further-refined my talk for Chief Electoral Officers (blog | slides), distilling my “open data principles” from 7 down to 5:

With a new government in place here in Prince Edward Island, and open data a part of the election campaign platform, in one form or another, of all the parties, I suggested that my presentation might find a receptive audience within the public service, and this led to a presentation to deputy ministers in late August (slides), a presentation that engendered 30 minutes of engaging discussion afterwards. That session was, I believe, as useful for me as for deputies, as I learned a lot about how, from a high-level policy perspective, the challenges and opportunities of open data are regarded.

Attending that session was Wendy MacDonald, Clerk Assistant to Executive Council. Last week I ran into Wendy on Upper Prince Street while we were out walking our respective dogs, and our street corner conversation led to a suggestion that there might be a wider audience for my presentation in the broader public service. And so this Wednesday I’ll present to a group of public servants over the lunch hour as part of a regular series of lunchtime sessions that are held for those working in policy and planning.

And before that, I’m presented to a “civilian” group tomorrow evening, the Open Data Book Club, a special interest group of the PEI Developers. While I am presenting the same material as I’ve presented to public servants, this is an audience of eager open data consumers, and so I’m looking forward to the opportunity to engage with them about what I’ve learned from the public service, and to help point the way forward from here. This session is free and open to the public; you can RSVP here. It will be held at the Charlottetown Yacht Club starting at 7:00 p.m. on Tuesday, September 22, 2015. 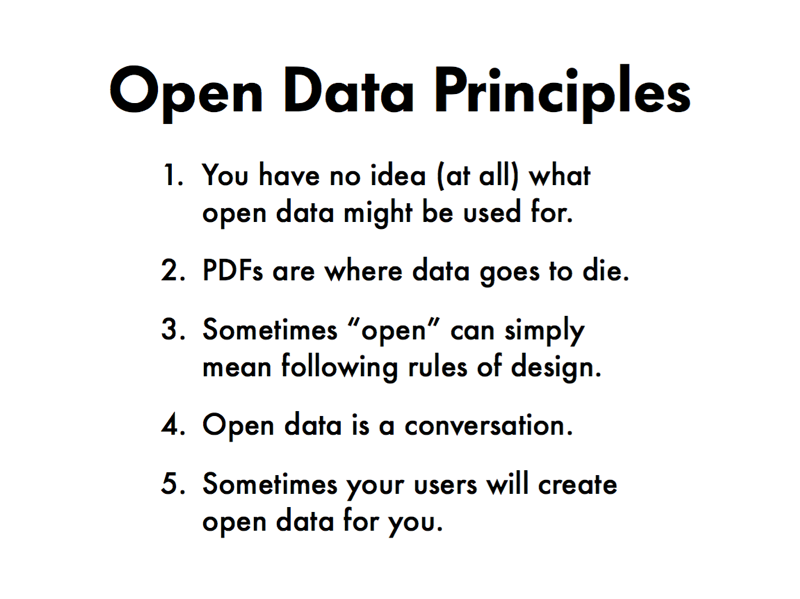