Those of you who have been reading here for a long time may recall that, many years ago during simpler times, I developed a macOS app called PresenceRouter.

PresenceRouter allowed you to echo your geopresence information in Plazes to a variety of other sites (we didn’t call them “social media” back then, just “sites”); by the time of the final release in November 2008 it supported 21 sites in all.

Here’s what it look like to add a new site to the configuration: 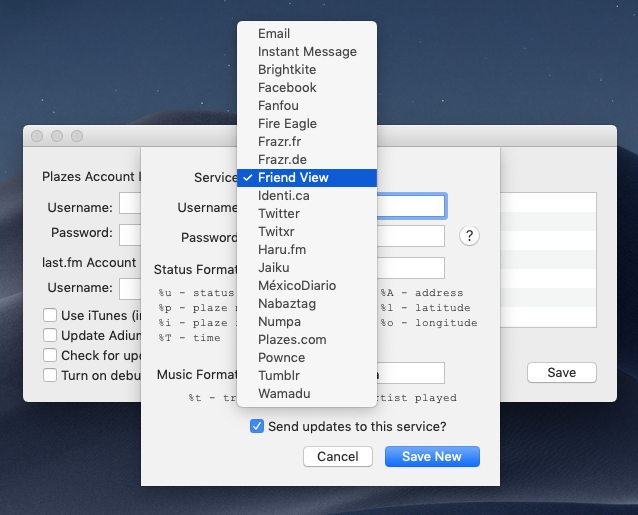 In reviewing the apps on my Mac that are 32-bit ( > About This Mac > System Report > Applications), and thus won’t run when macOS Catalina is released later this fall, I noticed PresenceRouter in the list.

In other words, if you upgrade to Catalina, you won’t be able to run PresenceRouter.

Given that Plazes, upon which PresenceRouter depends, shut down 7 years ago itself, this shouldn’t prevent a practical impediment to anyone. But it is the end of an era, and the practical end of a project that taught me a lot about developing Mac apps, about  authentication, and about the open web.

More serious for me at this point is that AccountEdge, the bookkeeping app that I rely on to run my business, is still 32-bit-only, and won’t be updated in time for the Catalina release. So I’ll be stuck in the Mojave until it gets updated.