But this Sunday morning there was a call for Green Party supporters to travel out to Brookvale for a video shoot, and Oliver and I resolved to attend, setting waffles aside for a week so as to ensure a better future for our grandchildren.

It was a lovely spring day, and among the ragtag crowd of Greens were many friends.

Alas a video shoot is, it turns out, filled with many strict instructions: go here, do this, don’t stand so close, shout this, look that way.

Delivered, I must say, with kindness by the director. But strict instructions nonetheless, and, on a waffleless Sunday morning enough of a source of anxiety that, when he ended up stepping on Ethan the Dog amidst their execution, Oliver tipped over into irreversible anxiety and we escaped back to town. Beyond the stress of the go-here-do-this, Oliver’s primary concern on the drive home was that he would be kicked out of the Green Party for violating the Culture of Peace core value, and it took a lot of convincing to convince him that getting freaked out by something isn’t an act of violence, even if it does involve walloping your father.

I sought reassurances, on Oliver’s behalf, that his party membership was secure and, when this was forthcoming, he and Catherine, after lunch, decamped to Green HQ to make some flags for a Monday night rally in Summerside. After supper, Oliver and I went back and powered through a bunch of campaign button-making in service to the same event.

By Monday morning the halo of anxiety was staunched, and all was calm.

Late last week I’d signed up for “drive voters to the polls” duty on a lark; after working in the digital engine room of the campaign for the past couple of weeks, I had an appetite for meeting actual electors, and I thought driving duty would be a handy conceit. On the space on the online form where I was asked to indicate the furthest distance I would be willing to drive to get someone to the polls, I cheekily entered “an infinite distance.” So I could hardly be surprised when the call came to drive out to Hunter River on Monday morning for 10:00 a.m.; not quite an infinite distance, but proof that cheekiness comes at a cost.

Regardless of the infinite distance of Hunter River from town, I thoroughly enjoyed the experience: my passenger-voter and I had a good chat on the way there and back, and I ended up giving them a referral to Dave’s Service Centre, as, in addition to needing a new government and a better future, they also needed a good mechanic.

After a return to civilian life for the rest of the morning, I found myself finishing up lunch at Mad Wok facing a soggy walk back to the Reinventorium, as it was raining cats and dogs, so I made the best of a bad situation and ran through the rain, around the corner to Green HQ, and made another cache of buttons for the Summerside rally.

A friendly Green gave me a ride back to the office an hour later, and after getting some more paid work done, just before 5:00 p.m. I went home, collected Oliver, and headed off to the advance poll so I could vote (I was mindful of how I forgot to vote in 2003 in the Hurricane Election, and I couldn’t conscience a repeat of that).

After voting, Oliver and I headed up to the Farm Centre to set up chairs for Tuesday’s lunch with Elizabeth May, an experience facilitated by excellent instructions from Volunteer Coordinator Barbara. We made quick work of the rearrangement; when we left the hall looked like this: 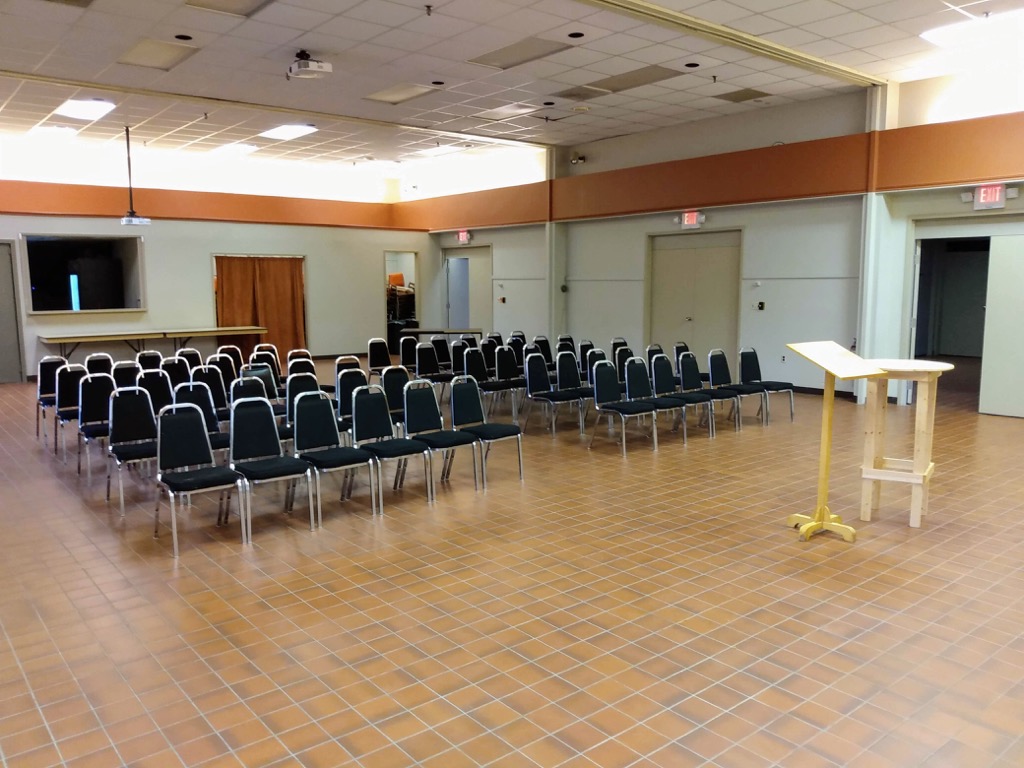 It was the perfect job for two people like us who like lining things up in rows.

All across Prince Edward Island there are Green volunteers driving people to the polls, making campaign buttons and setting up chairs in their local hall, most of them devoting many more hours in the day than I’ve been able to afford. Watching all this happening, and dipping my toe in its waters, has been a revelation to me: heretofore I’d never seen myself as part of the group of people who does things like this; I’d simply assumed there were people–other people–who handled it. It turns out that the people who put up the chairs, and make the buttons and the flags, and drive people to the polls, is us.

That will be the signature takeaway for me from this campaign; it’s also a pretty good metaphor for why I’m doing all of this, contrary to type: the revelation, which I keep returning to, that “there’s no us and them, there is only us.” In other words, If I don’t like the way things are working, it’s up to me to step forward, set up the chairs, and help develop a plan to make them work better.

After setting up the chairs, Oliver and I hopped back in the car and drove up to Summerside for the rally at the College of Piping (it was only my third such event: I went to an Ann Richards rally in El Paso, Texas in 1990, and, before that, a Pierre Trudeau rally in Hamilton, Ontario in 1980). There were speeches and songs and fundraising and more songs. I got to hear Elizabeth May speak for the first time (she was, I must say, a fantastic orator). And we met a woman named Beulah and her husband, sitting next to Oliver, and had a nice chat.

When the rally was over we got back in the car and drove the misty 50 km back to Charlottetown, talking about politics and voting and Oliver’s popular music appreciation course in school. And that has been the other gift this campaign has given me, the gift of being able to work along side my son on a project that we’re both passionate about.

This is turning out to be a very interesting week.

Here’s a photo from Tuesday, showing the chairs that Oliver and I set up in action (with Elizabeth May at the head of the room at the podium): 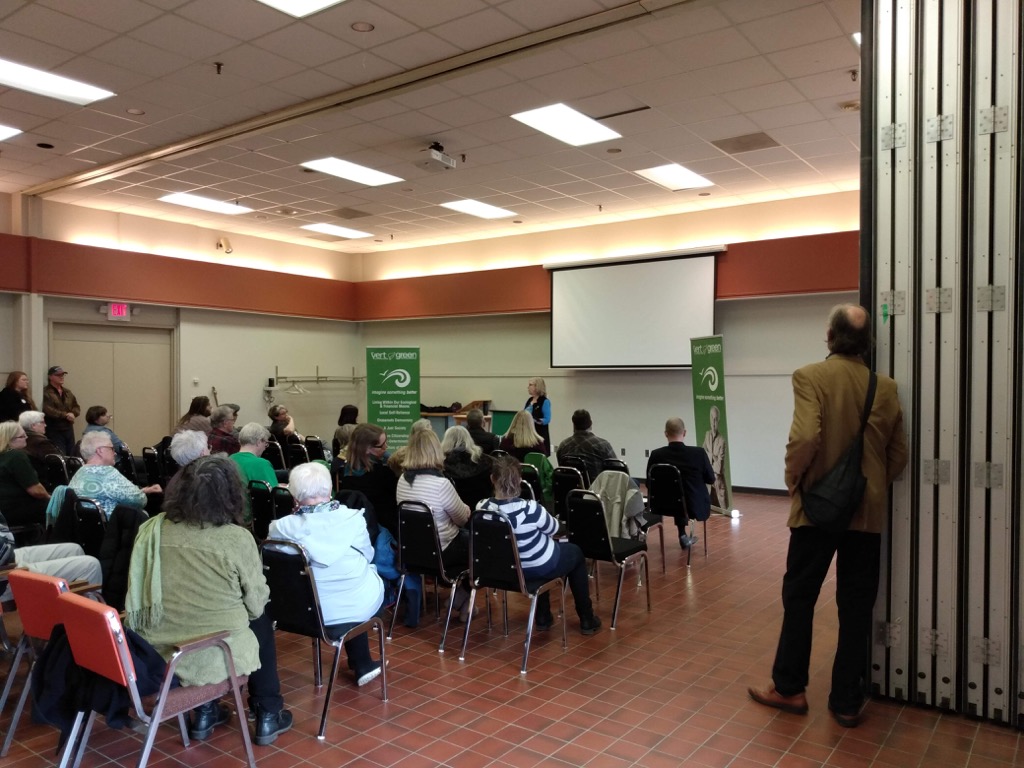