Bill McFadden has heretofore been notable to me primarily for his ubiquity: he is one of a small cast of people whose path I seem to cross several times a day while making my way around downtown Charlottetown. When Fred Rogers sang of “the people in my neighbourhood,” it was people like Bill he had in mind.

In addition to his ubiquity, Bill is also an actor (“an actor of extraordinary gift and remarkable talent,” wrote my friend Ann some years ago), a writer, a father, and someone who has thought a lot about the world and how it works and doesn’t.

A few weeks ago I ran into Bill on Prince Street and his impending entry into municipal politics was much in evidence: he had the nomination package in hand, and was in the midst of dotting and crossing.

So it was not a surprise when, a few days later, he became the fifth person to announce a candidacy for Mayor of Charlottetown in November 5th’s municipal election.

Bill’s time on the dais on Wednesday was mostly spent in observational silence; he did, however, make two powerful points.

First was that the role of mayor is to chair meetings of council, to develop consensus, to cast the deciding vote when needed, and to report the results to the people.

The truth of this is born out in the Municipal Government Act:

Role and duties of mayor
The mayor of a municipality, in addition to performing the duties of a member of council, has a duty to
(a)    preside, when in attendance, at all council meetings, except where this Act provides otherwise;
(b)    provide leadership to the council and the chief administrative officer;
(c)    cast a deciding vote in instances where there is an equal number of votes for and against a bylaw or resolution; and
(d)    perform any other duty or function imposed on the mayor by a bylaw or this Act.

While “performing the duties of a member of council,” can, of course, include having ideas of ones own, it seems clear that the primary duty of the mayor is to act as combination Chief Facilitator and Chief Storyteller.

None of the other candidates embraced this characterization to the extent that Bill did: each presented an agenda of projects, ranging from eliminating traffic accidents to building new ice rinks to filling in ditches. While there was lip-service paid to consensus-building and public consultation, the notion that the mayor’s chief goal should not be to reshape the city in their own image but rather to do everything they can to enliven the necessarily collaborative process of council hovered far off in the background. If it was there at all.

When I was chair of PEI Home and School Federation, I would often get calls from the media on various public school-related issues: “what do parents think of the new zombie apocalypse drill procedures?”, “should students be held back to repeat a grade,” “how do you feel about the standardized test results?”

My universal reply was “I don’t know.” Unless it happened to be an issue on which our federation had reached consensus through a policy resolution. I did not consider it my role to have opinions, to have an agenda, to communicate my personal take on education as though it represented the collective view (indeed my personal take was often at odds with the collective view). Instead, I saw my role as doing what I could to bring people together, to help them make decisions, and to communicate those decisions to others.

That model of leadership has served Home and School well for 65 years, and I believe it’s the model that should govern the conduct of the mayor; of the candidates, only Bill McFadden appears to agree with me on this.

There are five good people running for Mayor of Charlottetown this fall. Four of them have spent months of work on their campaigns, have teams of supporters, campaign offices, brochures, and answers for any question that electors might put to them; it is clear that each of the four is very invested in the campaign, and wants to be mayor.

Bill McFadden seems to, mostly, want to continue to be Bill McFadden. It seems odd to say so, but I think that having a mayor who casually ambles to the position out of a sense of civic duty is preferable to someone who wants to be mayor so badly they can taste it.

At the end of Wednesday’s debate we spotted Bill’s bicycle near the entrance of the hall, and we hung around, groupie-like, to thank him for his approach. We had a brief chat, and then he got on his bike and sped off into the cool Charlottetown night.

Bill McFadden, I think, deserves our serious consideration for the job. 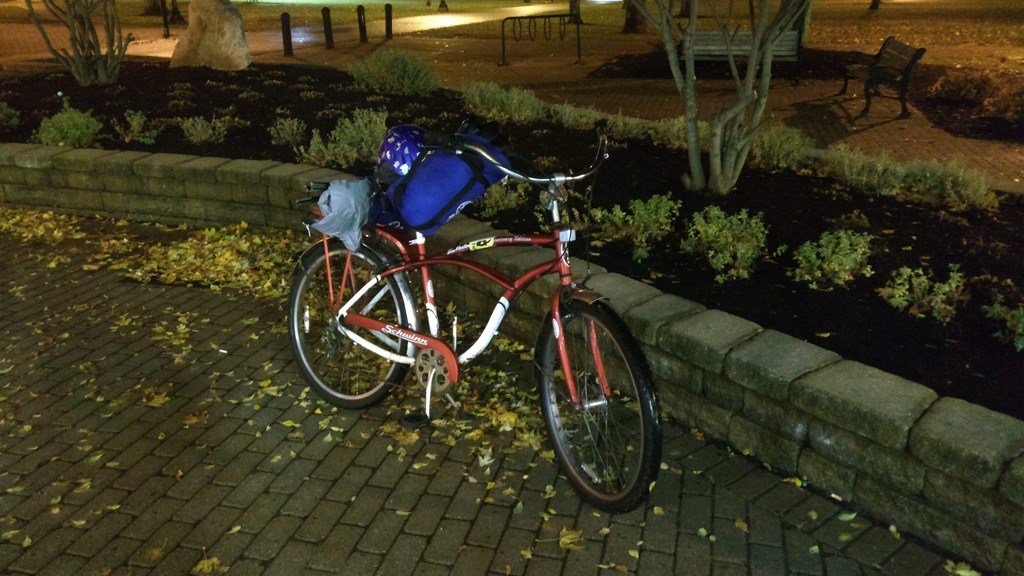 A great post, Peter, on the eagerness for power, and being on the side of humanity as a whole.

serious props to candidate McFadden for riding a Schwinn :-) ! i ride a vintage 1946 "ladies" schwinn and it's amazing and the reproductions are pretty darn good i hear :-)

I heard Bill say these things and I was impressed with his sense of Civic Duty and calm. His approach is very different and may be lost on some. I agree with your analysis of the situation.