In 2014 I posted about our energy consumption at 100 Prince Street: that year we used 3,710 litres of home heating oil.

I asked Kenmac Energy for a statement of the three years we’ve been a customer (we switched from Coop Energy when it shut down) and they helpfully provided it. Combining that with data from Coop Energy, here’s what we consumed:

Here’s a visualization of our usage, contrasted with the annual heating degree days for Charlottetown (from here: a measurement designed to quantify the demand for energy needed to heat a building. It is the number of degrees that a day’s average temperature is below 65o Fahrenheit): 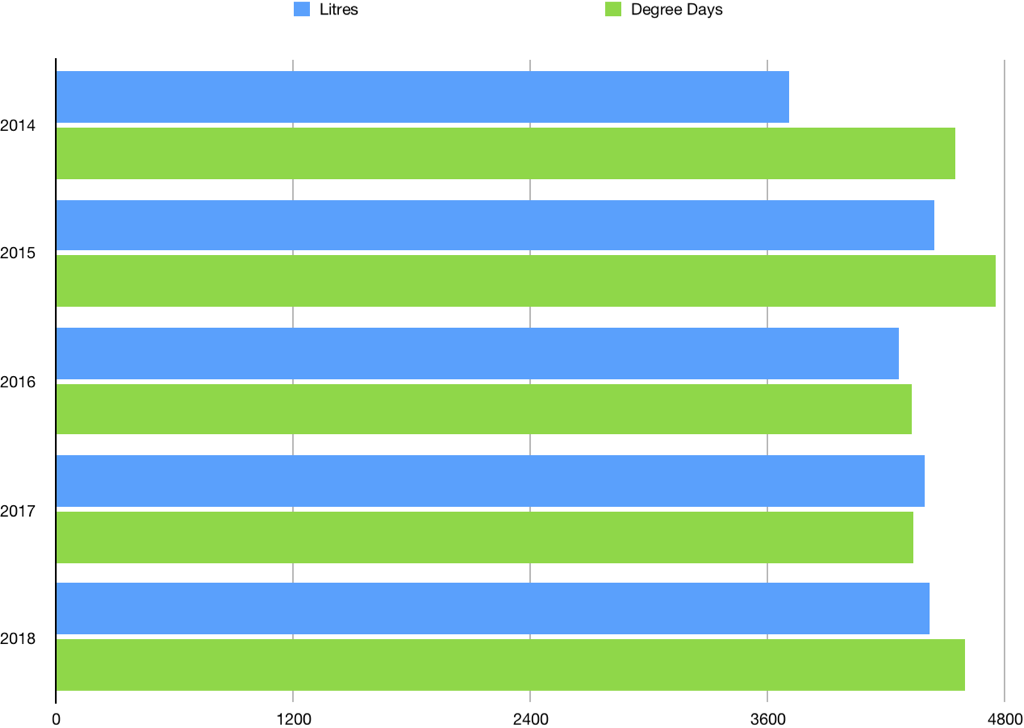 Our consumption has gone up 711 litres/year from 2014 to 2018, but otherwise appears to be generally related to the number of heating degree days, which makes sense; given the number of degree days in 2014, though, I’m wonder if I under-reported the figure for that year.

I do all this calculating by way of trying to determine the way forward for how we heat our home.

We got a (very) ballpark estimate of $36,000, all-in, for replacing our oil-fired boiler with a high temperature vertical closed-loop geothermal system; while such a system wouldn’t take our energy costs to $0, as the system requires electricity, it would be dramatically less expensive.

We spent $4500 for our 4421 litres of home heating oil last year, so, very crudely, the geothermal system would have a payback period of 8 years. Which seems pretty amazing (assuming, of course, free and ready access to $36,000).

Thanks for posting the numbers. When I looked, admittedly very briefly, at geothermal heat pumps for Ontario, it seemed like a lot of regulatory overhead due to radon fears, but I didn't check well enough to put a price on that overhead. Do you know if the radon situation is different in PEI (I can imagine it can well be), or does your $36k estimate include crossing all the Ts on radon?

Interesting — I hadn’t thought of radon being a factor in geothermal at all, but it’s all new to me, so thank you for the mention.

There is radon on Prince Edward Island, certainly (see here for example), but certainly not everywhere. I did a radon test in the basement of my office, directly across the street from our house, and the result was 133 Bq/m3, with the explanation:

Radon test results are below Canadian action level of 200 Bq/m3.

That said, the World Health Organization “action level” is 100 Bq/m3.

Hm, checking again now, I'm not seeing much about radon, so I may have gotten confused earlier. If you do look into it in more detail, I'll appreciate if you write about it.