As regular readers will know, I seldom write about sex in this space1.

And I’m not going to start now.

But the tale I will tell, while not sexual at all, certainly involves vulnerability in the same neighbourhood. And also nudity.

I drove up to Summerside today to visit The Recovery Studio, to spend an hour floating in their “sensory deprived isolation tank.”

I do not know exactly why I decided to do this; I really don’t. There was an aspect of 7% more risk to the plan. And curiosity. A need to travel somewhere, even if it was only to Summerside, and inside myself. Perhaps the most honest reason I can give you is that I’ve been wading through some tectonic shifts recently that feel, in a way, like a rebirth2; I needed a way to stop and look at that outside of the daily flow, and removing my senses from the game seemed like it might afford an opportunity to do that.

This is what a sensory deprived isolation tank looks like: 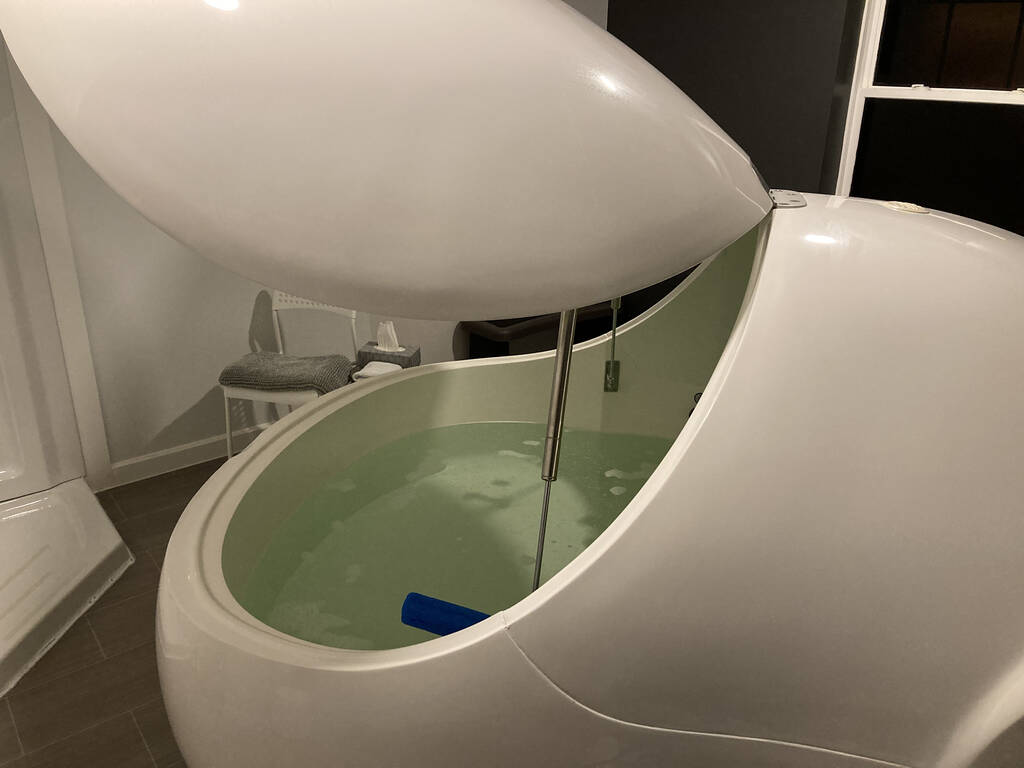 Think “space pod filled with enough super-saturated salt solution to replicate the Dead Sea.” There’s a video walk through of the entire experience; watch that and you’ll have a good idea of the practicalities.

It’s harder to communicate something of the actual experience, because so much of the experience involves absence. Which is the point, but still came as a surprise.

Absence in the sense that after 5 or 10 minutes of acclimation, parts of me simply disappeared. And by “parts,” I mean both my sense of where I was in physical space, but also insidey parts.

It took me some time to get comfortable: I had a kink in my neck, a neck unused to being able to just be, that I needed to find my way through. The position I ended up in was not unlike one you’ll be familiar from the innumerable long-term-voyage-to-Mars where the crew goes into stasis, with my arms folded over my chest.

And then everything just kind of drifted away. I wasn’t asleep. But I wasn’t exactly awake either. And for a time–10 minutes? 20 minutes?–I’m not sure where I was. But I do recall, with palpable clarity, a feeling of warmth and confidence and safety that was profound.

I thought, in the back of my mind, that who I might meet on the inside was other people; but I met me3.

When the music faded back up to signal that 5 minutes were left, I was caught unawares. But I was okay. I lifted the lid, had a shower, and emerged into the daylight.

I don’t wish to oversell the experience: I’m still Pete. The parts of me, inside and out, that were sore, are still sore. But I did get somewhere new, and I’m carrying that little bit of new around with me still; it seems to have staying power.

Our next catch up is going to be even more fun :D

You need to read about their history and how they came up as a way to study the unconscious mind and what apparently happens to our brain waves while in the "pod"...

The neck experience is easily fixed with a circular piece of styrofoam or something similar to keep your head at the right angle.

Wow. That sounds pretty amazing. Is the opposite of claustrophobia perhaps expansiveness? I need to try it? Do people ever fall asleep do you know?

oooo. I got an ad for this one week and two days happened upon a podcast episode based on the experience. I decided to try but forgot. Thanks for reminding me!