Three years after we moved into our house at 100 Prince Street we got an ominous letter from a firm handling the “prophylactic bankruptcy” of W.R. Grace, a U.S. company that made vermiculite insulation. The industrious previous owners of our house had, in the 1970s, insulated the attic of the house with vermiculite, no doubt in reaction to the energy crisis of the era and perhaps with government financial assistance.

What they didn’t know at the time was that the vermiculite they were insulating with came from the Libby Mine in Montana and that it contained asbestos. The notice we received was to inform us of this, and to let us know that we might be eligible for compensation to have the asbestos-containing insulation removed.

Unfortunately, it turned out that although claim payments in the United States were generous, and homeowners could get a good part of the cost of removing the insulation covered, in Canada there was much less available: $600 was the figure reported by the Toronto Star in 2009.

We were left with a choice: leave the insulation in place–which is okay, as long as it’s not disturbed–or bear the cost of having it removed.

It took us about a decade to decide what to do, and then, in 2015 when we got a quote for $12,000 to have the insulation removed, we decided to wait even longer.

Finally, this year, things came to a head: our roof started to leak, we got a new roof put on, and we wanted to address the historical issue of ice dams forming, which would damage it (and consume my time with roof-raking).

I got another quote for vermiculite removal this fall, and this time it was $13,000.

We didn’t have $13,000 to spend, and so I started a deep dive into the world of asbestos remediation contractors in Atlantic Canada, starting from this list from the Workers Compensation Board.

I found a company in Halifax that would come over for $4,200 plus travel and accommodation; this was better, but still more than we had to spend, and with a question mark over what the travel expenses would be.

After talking to a lot of people on the Island about possible other options, I was referred to Jason Maddix from Maddix Contracting in Wellington. Jason came recommended from several sources I trust, so I gave him a call and a few days later he came for a look; his quote for removing the insulation and re-insulating the attic with 12 inches of blown insulation, was $2,650.

Which then precipitated a need to remove everything from our attic. And in this case “everything” meant cardboard boxes from Oliver’s childhood toys, things we never unpacked from our 2000 move into the house, myriad computer manuals from the 1990s (Turbo Pascal, etc.), two old PCs, an Apple QuickTake camera, Christmas decorations, cassette tapes, CDs, and all manner of cruft that we have no need for but could never mount the energy to clean out. Now we had no choice.

We filled two twelve cubic foot dumpsters with the things that we didn’t need any longer and that weren’t salvageable (and, time being of the essence, I set a very, very low bar for that). The dumpster-filling was made much easier by the position of the dumpster immediately below the window at the end of the attic: I was able to heave almost everything out that window that needed to be removed, something of a miracle as it’s a pretty tiny window.

It took me three days to get everything out, and when I was done here’s what it looked like: 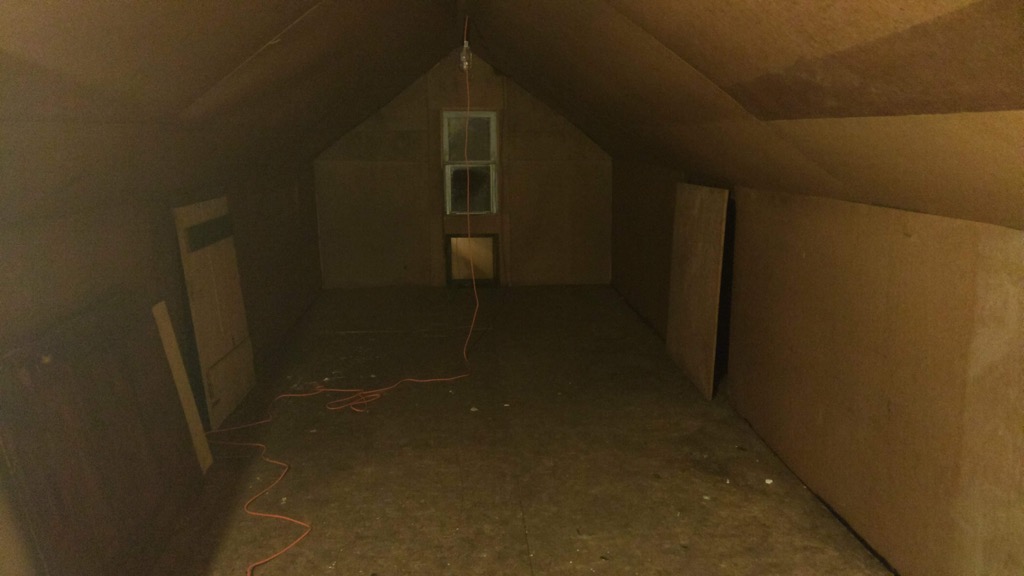 I got a call from Jason last Monday telling me he was ready to start on Wednesday, so Wednesday morning we cleared out of the house (not so much from the hazard, as the asbestos was to be contained to the attic, as to mitigate the disruption to family life) and decamped to the Charlottetown Hotel. Jason and his crew arrived at exactly 9:30 a.m. as promised and worked through the day on Wednesday and Thursday morning to remove the insulation. They got an air clearance test done from ALL-TECH, and then blew in the insulation on Thursday afternoon, finishing up around suppertime. 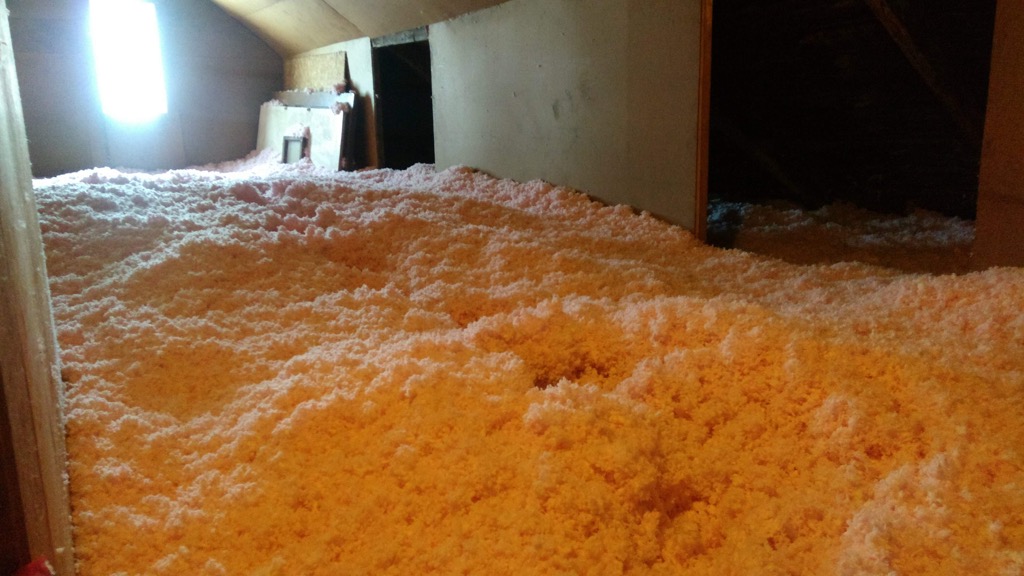 Because we weren’t content to leave the complexity of the job at that alone, we simultaneously arranged to have the ceiling in one of the upstairs bedrooms repaired at the same time (it suffered water damage from the roof leak, that roof leak that was the reason for everything that followed).

While Jason’s crew did a remarkable job cleaning up after themselves, the end effect of the two weeks of construction activity was to leave the house in quite a state, and so I spent a good part of Friday and Saturday restoring order to the household. A new vacuum cleaner was secured, a dozen loads of dusty laundry completed, the remaining detritus from the attic moved into out of the way corners of the house. I put the last load in the dryer at midnight last night and fell fast asleep almost immediately.

If you happen to find yourself in a similar situation, needing asbestos removed from your house and unwilling to sell you firstborn child to pay for it, I heartily recommend Jason: he was quick to communicate, arrived when he said he would, did the job as specified, and was out the door in exactly the time he estimated he would be.

After a new driveway, a new roof, a upstairs toilet leaking into the kitchen ceiling in late summer, and now this, I hope we are done with 100 Prince Street  infrastructure work for the foreseeable future. We need a break!

Of the scores of tapes and CDs that went into the dumpster, I saved one A Quiet Normal Life: The Best of Warren Zevon, his 1986 album. Our vintage 2000 VW Jetta has a cassette player that hasn’t seen life for a decade; it still works, though, I found yesterday, and so if you hear Werewolves of London blasting out of a passing car in Charlottetown this winter, it’s likely me. 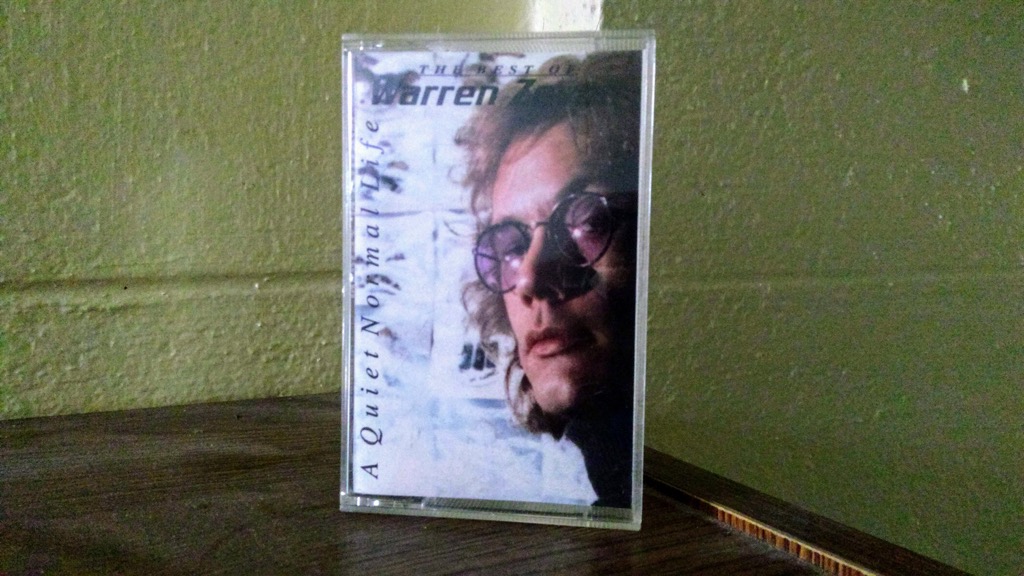 Do I see correctly that the insulation is on the attic's floor? So that means you no longer can make use of the attic space? That is indeed a good way to create the necessity of getting rid of stuff!

That is correct. We could have gone with a lower R-value of insulation and maintained the use of the attic as a storage space, but the increased insulation from R-40, added to the prevention of additional stuff-accumulation is, if nothing else, a gift to Oliver once we’re gone and he doesn’t need to throw away another several layers of our abandoned things.

It does, however, leave us without a place to store the Christmas decorations, which is a conundrum we haven’t solved yet.

We visited London for the first time in March of this year and discovered “Werewolves of London” at the same time on a list of the best songs about the city. I’ve listened to it a couple of dozen times since then. Great song. I’m also a fan of Gurf Morlix, who played in Zevon’s band but now is a singer-songwriter and producer in his own right.

I have recently entered the stage of life of storing my kids belongings as they move away. Doing so meant cleaning at least a corner of the basement and getting rid of a bale of finger paintings, pasta art and more pairs of roller blades than we ever needed. I am very impressed with the clearing of a whole attic.
Your future self should thank you.

Unfortunately I’ve been unable to get Catherine and Oliver to agree to a “we are never again to buy anything else” program. I’m still working on a “one thing in, one thing out” proposal.