For yesterday’s session of Philosophy 105 – the third of four I’m facilitating this winter – I wanted to bring my longtime friend and colleague Ton Zijlstra into the classroom to broaden our discussion of open data.

I’d introduced the topic last week with an exploration of a local wind energy data project I’d undertaken; Ton has thought longer and harder about the fundamentals of open data, and has worked broadly in Europe with politicians and bureaucrats on the topic, and I knew it would be valuable for the students to hear from him (and I was curious to check in too!).

One of the frustrating realities of the architecture of University of Prince Edward Island classrooms – and, I imagine, most university classrooms anywhere – is that they were built with a particular “professor at the front, talking behind a podium or in front of the whiteboard” model of education in mind. While there’s been a lot of work in recent years to extend this into the digital realm – all classrooms, it seems, have a screen projector and a PC and perhaps some sort of audio-visual system – the classrooms don’t have cameras, for example, making it hard to include others in the conversation by Skype. To say nothing of being difficult to use when students aren’t sitting down and the professor isn’t speaking at them. They are not, in other words, laboratories for collaboration.

I set out to solve that issue, in an ad hoc fashion, for Monday’s session, to enable Ton to drop into the classroom.

To start, I purchased a Logitech C930E wide-angle webcam (discussed in more detail here): the camera has a 90 degree field of view (in other words, its “eye” can take in 90 degrees of space in front of it), making it well-suited to capturing a wide swath of the classroom.

Here’s how I wired everything together: 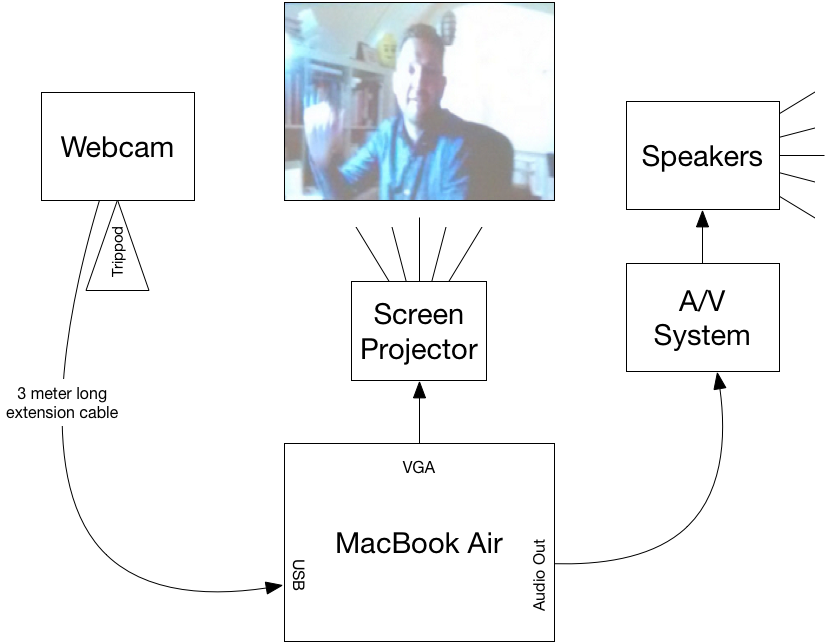 The webcam connected to my MacBook Air by USB. It worked both as a camera, mounted on a tripod, pointing back at the classroom, but also as a microphone, picking up both my voice and the students’ (it appeared to work very well for this, and there were no problems with Ton hearing us). I used a 3 m extension cord to extend the range of the webcam, but turned out not to need it because I ended up positioning the camera on an angle to avoid having the light from the bright screen projector interfere with it.

For audio out in the classroom I connected the male 3.5 mm audio cable that emerged from the classroom’s A/V cabinet into the audio out port of my Mac and then adjusted the volume on the podium controls (it was turned down all the way when I started, which made me think it wasn’t working, but it was). The speaker system in the classroom was excellent, and everyone could hear well.

To project my MacBook Air’s screen – and Ton – onto the screen in the classroom, I connected the male VGA cable in the podium to a Thunderbolt-to-VGA adapter plugged into my computer. The Dell screen projector in the classroom automatically detected the signal and there was, unusually for such situations, no need to fiddle around with this: it just worked.

When it was all set up and running, it looked like this: 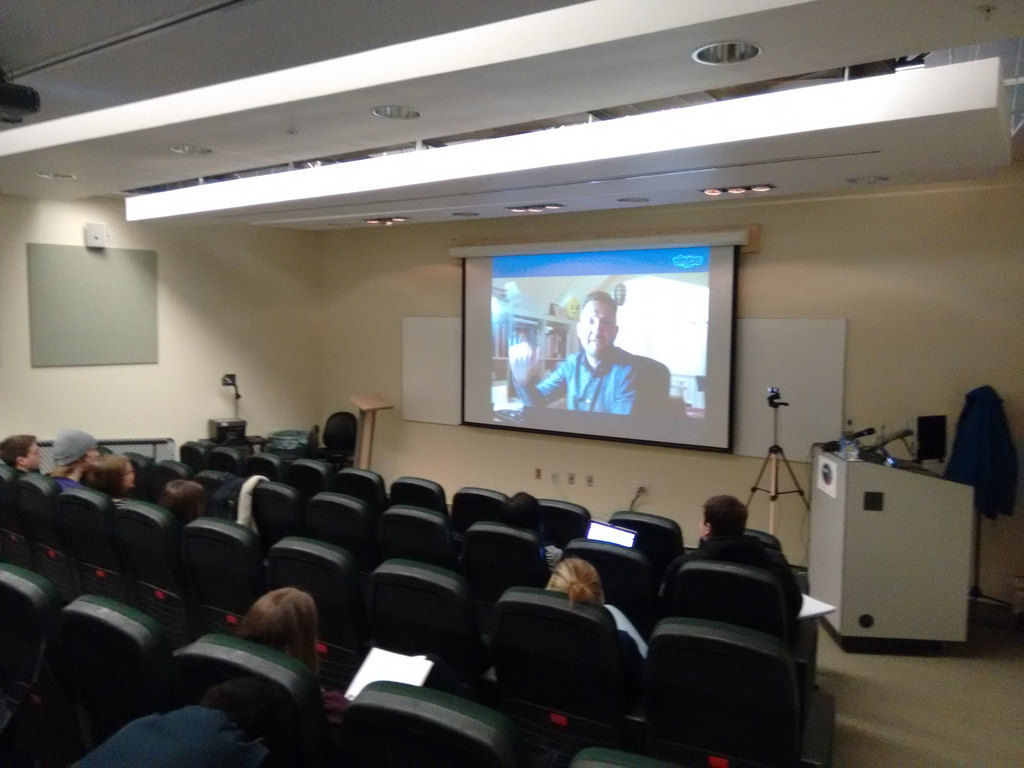 You can see the podium on the right, with the webcam on the tripod in front of it. The webcam was about 1.5 m in front of the front row of the seating and it took in everyone you can see in the photo in its view, meaning that Ton could see me (in the front row) and all the students.

Skype worked well, relatively speaking. Over 45 minutes of talking with Ton there were 3 or 4 times when audio and/or video dropped out, generally only for 10 to 15 seconds. We never lost the connection completely; it always recovered on its own. Otherwise it was like Ton was right next door: we could see and hear him, he could see and hear us, and we could forget about the technology and just have a chat.

I would have had some concern about the extension cord gumming things up or limiting your resolution. I think my old scanner came with a short cable with fancy looking woven metal sheathing--for grounding or reducing capacitance I'm guessing--plus instructions not to use an extension cord. Ive thought the issue is/was bandwidth. I guess compression algorithms or something might have gotten better.