Yesterday I wrote about Plazes, a neato “geosocial” service. Tonight I saw it work in the real world.

At about 1:00 a.m. I was just finishing up on the late-nite blogging and email checking when a new email came in: 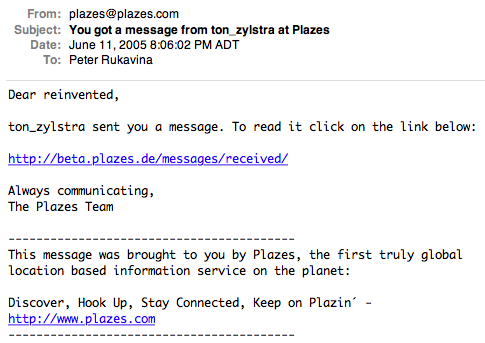 So I did was I was told, and clicked on the link, which took me to:

Ton found me originally because (a) Rob Paterson (big in Europe) told him to watch out for me and (b) because his Plazes told him I was here: 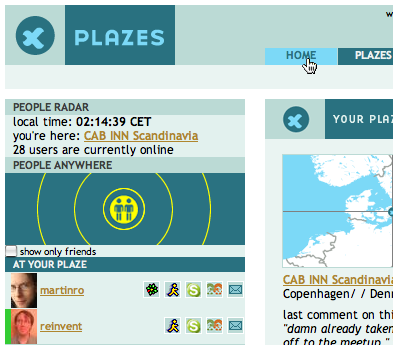 …and got dressed, went out to the lobby, and found Ton and Martin having a drink. I grabbed a hot chocolate, sat down, and we talked for over an hour about everything from Robert Scoble to making open source bread and open source cars, to just what all those people with laptops open during presentations at reboot were doing.

So Plazes was a social prosthetic device that (relatively) effortlessly enabled a conversation to happen that otherwise never would have.

By lucky coincidence I ended up crammed into the back of a Mercedes with Stefan Kellner and Felix Petersen — the “Plazes guys” — tonight on the way to dinner. They’re thoughtful, intelligent guys, but they’re otherwise completely normal. I think one of the most useful roles of conferences like reboot is to expose easily star-struck and meek people like me to thoughtful, intelligent people with brilliant projects like Plazes who happen to be otherwise completely normal: it makes it seem possible that, with some work, we too could become thoughtful and intelligent.

It was greeting meeting you this way. Thanks for the energizing conversation (even though it was very very late, and I was completely exhausted.)

Great! Another way for people tp keep track of my whereabouts.

Orwell = being kept track of by others, without any choice in the matter.

Plazes = choosing to be kept track of.

Presumably in the world of freedom of information and protection of privacy, I should be able to choose my degree of privacy, and if I choose to expose my location, that’s up to me. The Plazes guys are very smart about this, and understand that opt-in to everything is important; indeed their default settings are uncommonly “don’t tell anyone this stuff.”

But if you aspire to make friends through Plazes then you need to make your visible, I presume, to the whole world, of which Big Brother is a member.

1. I aspire to make friends through Plazes, I aspire to spread information about my presence (in the technical use of the word) to a group of friends and colocatiants I already have..

2. I don’t mind if Big Brother knows where I am. At such point as I do, I will shut off the tap. The important thing for me is that I have my hands on the tap.

it was greeting meeting…. what I meant was: it was great meeting you. So much for typing a message after a long car ride.

Agree with Peter on the importancy of being able to control what it is you share with others. Big Brother is all about being followed, Plazes is more about standing in the square shouting “I am here”. Usually I have Plazes switched off e.g. At the conference I had it switched on, because it might be useful there. And it was! This conversation, and the one in the lobby, are a direct result of it.