The text came in just before 12 noon yesterday: “do you think we have time to go to the beach today?”, asked Catherine.

It was a rainy Sunday, not beach weather. But when the call comes, small details like that are irrelevant. Our crew was in the Jetta and out the door, heading east, within 15 minutes.

Our first stop was the Morell Farmers’ Market (not the beach, but one needs sustenance). We arrived too late, just before closing, but some beef jerky and some apple juice were secured, some old acquaintances renewed. And we were off again.

With promise of a 2:00 p.m. Farmers’ Market up the road in St. Peters Bay, we continued to head east, only to find ourselves dropped into the midst of the final day of the St. Peters Blueberry Festival. Our arrival coincided with the start time for The Great Blueberry Roll in the Catholic church parking lot, wherein 500 blueberry-coloured ping-pong balls were to be rolled down the hill, with the first one through the gate winning its owner a $1000 cash prize.

As it happened, the wind at 1:30 p.m. was blowing strongly from the west, with a force almost exactly opposite to that of the gravitational force exerted on a flock of ping-pong balls. So, rather than rolling down the hill, they vacillated between staying stuck in place and rolling up the hill. Emergency organizing committee meetings were held and a Plan B developed: they gathered up the balls again and restarted the race from halfway down the hill, where the wind was a little gentler, and the rise of the hill a little steeper. It just barely worked, the result being more a molasses roll than a blueberry roll.

With the Morell Plan for eating lunch having been dashed, we drove up toward Greenwich and stopped at Lin’s Takeout, where all manner of fried foods were consumed, all very well-prepared, and in a location that cannot be beat.

To this point the rain had held off, but just as we were putting our lunch waste in to the recycling and the compost it started up, and by the time we were out the driveway it was in full force.

At which point I rediscovered that the windshield wipers in our 18 year old VW Jetta get seized up from lack of use, and while they worked, they worked in a way that was very much in the spirit of the blueberry roll, and not with the force required to wipe water from the windshield effectively.

When we came to the sign, pointing up a clay road, for Cable Head West, we followed, as promises of Cable Head East being somewhere thereafter were too great to resist. Just after we made the turn, I noticed an interesting looking building off to the right and looped back around to take a closer look. It appeared to be a schoolhouse, and it was beautiful. 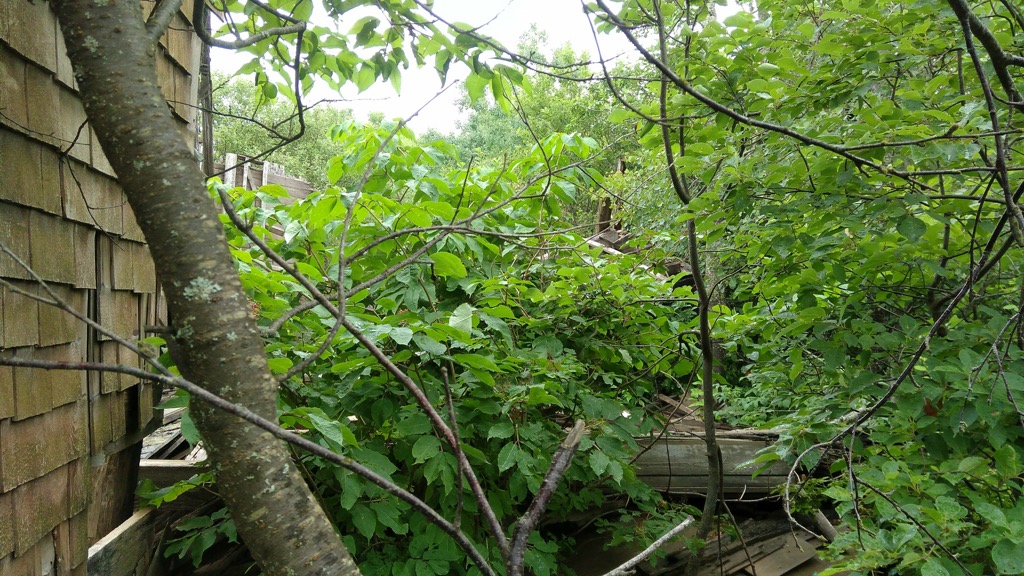 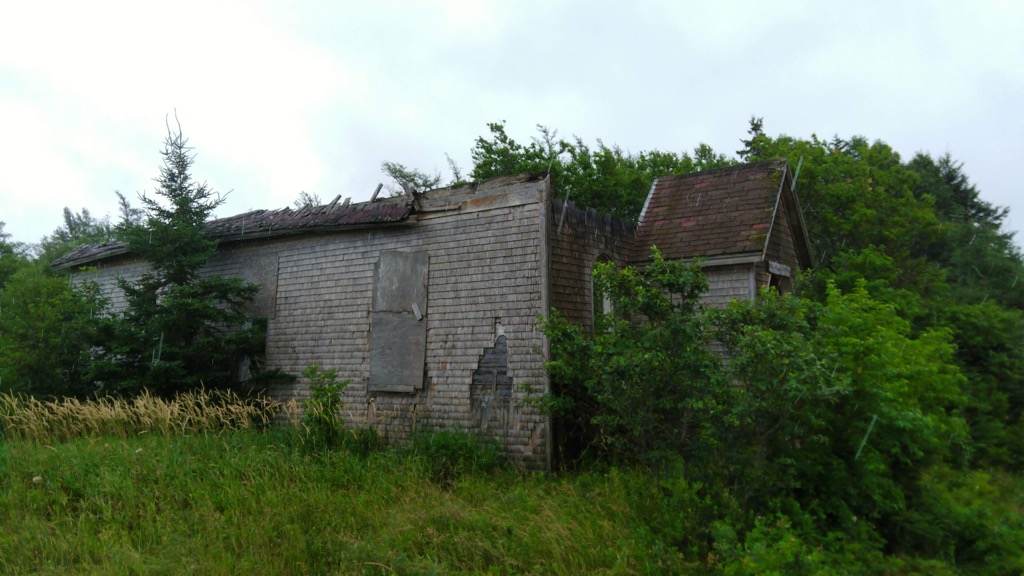 We continued along to Cable Head West, and then reached the Turret Bell Road, which led to the beach.

The beach having been our goal all along, we set the rain aside (Oliver was unwilling, so stayed in the car with Ethan) and Catherine, cane in hand, navigated through the sand and the rocks and the slippery muck and made it down to an empty (and stunning) expanse of the shore (therein violating multiple palliative care regulations save the “continue to live life to the fullest” one).

We recoiled back to the car and continued east.

We passed through Cable Head West and then, just before Goose River, we came to a handmade sign on the road that said “Goose Crossing” and, sure enough, there was a goose in the middle of the road. Crossing. 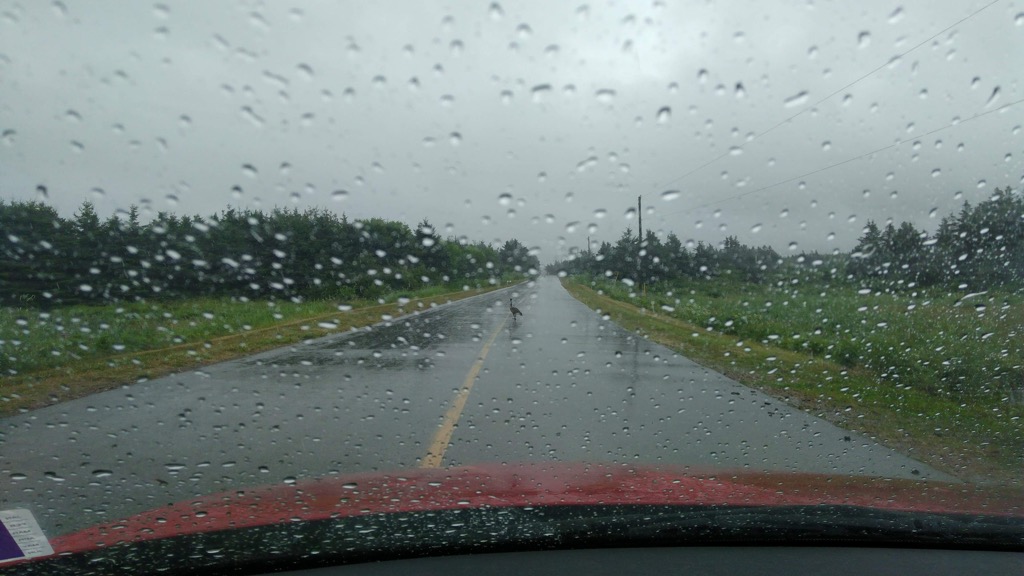 As my family has a history of shaky relations with the goose kingdom, I proceeded gingerly. This ginger passing gave me pause to reflect that I had a can of spray lubricant in the trunk, so I stopped (once well-clear of the goose) and spritzed the windshield wiper motors; they immediately sprang to life with youthful exuberance.

We eventually came to Naufrage. As mere minutes earlier Catherine had said “you know what would make this day perfect… ice cream!”, a brand new ice cream stand, Red Rock Adventures, sprang up before us, on the shore side just past the Shipwreck Point Café. Where we secured two ice creams, plus a coffee, for less than the cost of a chichi city ice cream.

We also learned about the Turret Bell, and why there is a road called the Turret Bell Road, from a helpful plaque just inside the front door; further research elaborated:

The ship “Turret Bell” was launched from Newcastle-on-Tyne, England in 1894. On 2 November 1906 the ship was blown off course and onto rocks off Cable Head, Prince Edward Island. The ship was a local viewing attraction for three years, until it was salvaged on 31 July 1909. The ship was towed to Charlottetown, then to Quebec for repairs, after which she returned to her work in coastal shipping and trading.

The Turret Bell Road was built to accommodate the needs of the interested viewing public, and has been there ever since.

From Naufrage we continued even farther east, eventually turning toward Souris when we got to the Hermanville/Clear Spring windmill site. The drive to Souris, along the Souris Line Road, was the rainiest of the day, with rain coming down harder than we’d seen all year. Fortunately our windshield wipers were, by this time, in peak operating condition.

As we pulled into Souris, it occurred to Catherine that someone had told her to watch out for something should she find herself in Souris, but she couldn’t remember what it was. So we stopped to see the newly-renovated boardwalk along the causeway, tucked in to Chef Michael’s Smith’s Flavour Shack, let Ethan out for a walk, and gathered our horses. At which point Catherine recalled that it was the selfsame boardwalk that had been recommended to her.

We then got back in the car, and as I was signalling to re-enter the highway Catherine saw a sign for fresh oysters, and expressed some interest, which she then quickly backed away from; “you guys don’t want to sit around watching me eat oysters,” she said. Of course we did. So I wheeled the car around, and found a new place to park. Directly in front of The Poké Shack.

Finding Hawaiian poké bowls on the beach in Souris defied all my assumptions about Souris, and there was absolutely no way we weren’t going to sample some. 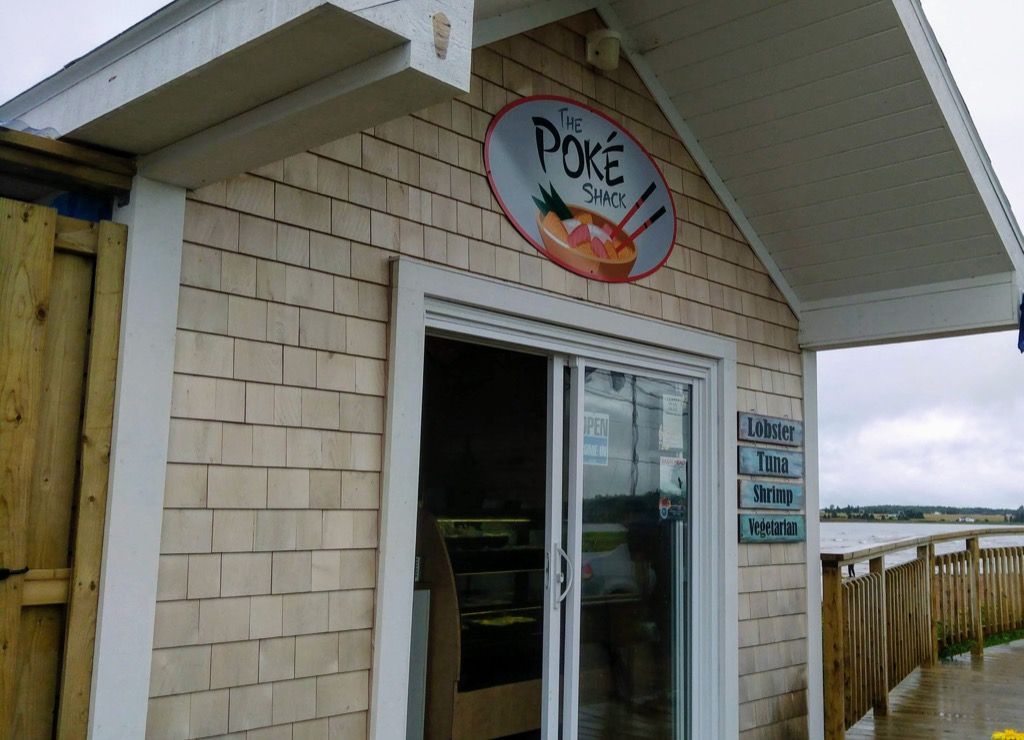 Oliver had the “farmer” poké (chicken) and I had the vegetarian (double rice); both were tasty and well-prepared, and we’ll be back, all the more for their unexpectedness. We finished them off with some tinned unsweetened Japanese green tea. 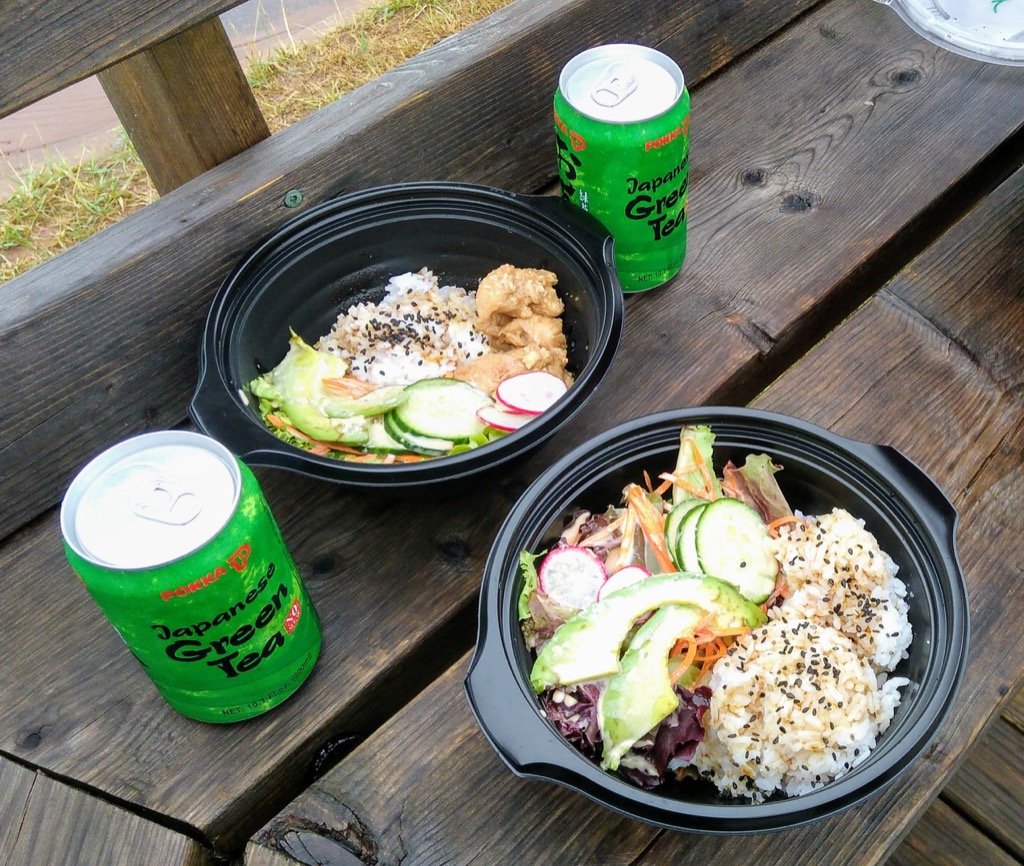 Catherine returned, sated, from her feed of oysters and, before we left again, she and Oliver went for a walk on the beach while I took photos. Google later concocted this panoramic impossibility of their walk:

The rain had dried up almost completely by this point. We got back in the car to pick up where we left off; with the windows rolled down all the way (miraculously, given the week’s heat, to the point where it was even a little chilly), we barreled back to town, pulling into our driveway just before 7:30 p.m.

What a wonderful adventure! I have been wanting to check out the boardwalk in Souris for a few years now. And I love Naufrage. You've convinced me this is a must day trip.