The North Pole, by Robert E. Peary, details the author’s 1909 controversial expedition to the top of the world, 108 years ago this week.

Chapter 22 describes the last steps of the journey, “We Reach the Pole,” and begins:

The last march northward ended at ten o’clock of the forenoon of April 6. I had now made the five marches planned from the point at which Bartlett turned back, and my reckoning showed that we were in the immediate neighbourhood of the goal of all our striving. After the usual arrangements for going into camp, at approximate local noon, on the Columbia meridian, I made the first observation at our polar camp. It indicated our position as 89° 57’.

This reference to the “Columbia meridian” intrigued me, as I’d never heard of it. And, indeed, it appears to be a reference of Peary’s creation, derived from the proximity of the 70th meridian west to Cape Columbia–the northernmost point of land in Canada–at 83° 6′ 41″ N, 69° 57′ 30″ W. Cape Columbia is only about 6km west of the meridian (here’s a KML file you can load into Google Earth to see for yourself): 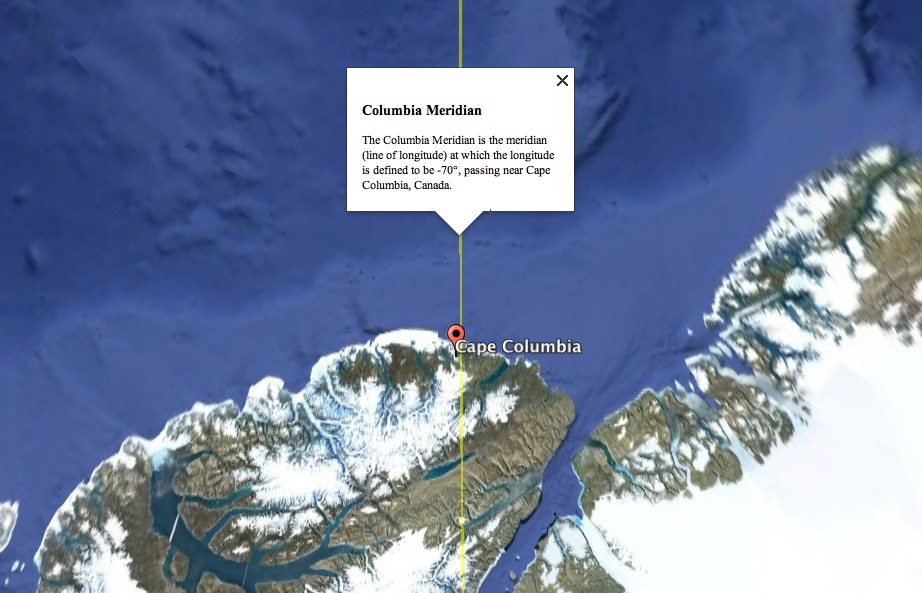 All of which had me thinking about longitude: I figured that if Peary could make up the “Columbia Meridian,” I should feel free to conjure the “Charlottetown Meridian.”

And so I will.

The best source for setting the longitude of the Charlottetown Meridian can be found in The Interpretation Act of 1939 (3 Geo. VI, c. 23, s. 6), where we find:

(m) a reference to time is to be deemed a reference to Atlantic Standard Time, (sixty degrees west longitude) being twelve minutes and twenty-nine seconds fast of the local time of the meridian which passes through the Provincial Clock on the Law Courts Building in Charlottetown.

And so the Charlottetown Meridian is the line of longitude that starts at the North Pole (90°N, 0°), passes through the Coles Building, and continues to the South Pole (90°S, 0°).

It looks like this on Google Earth (here’s a KML file): 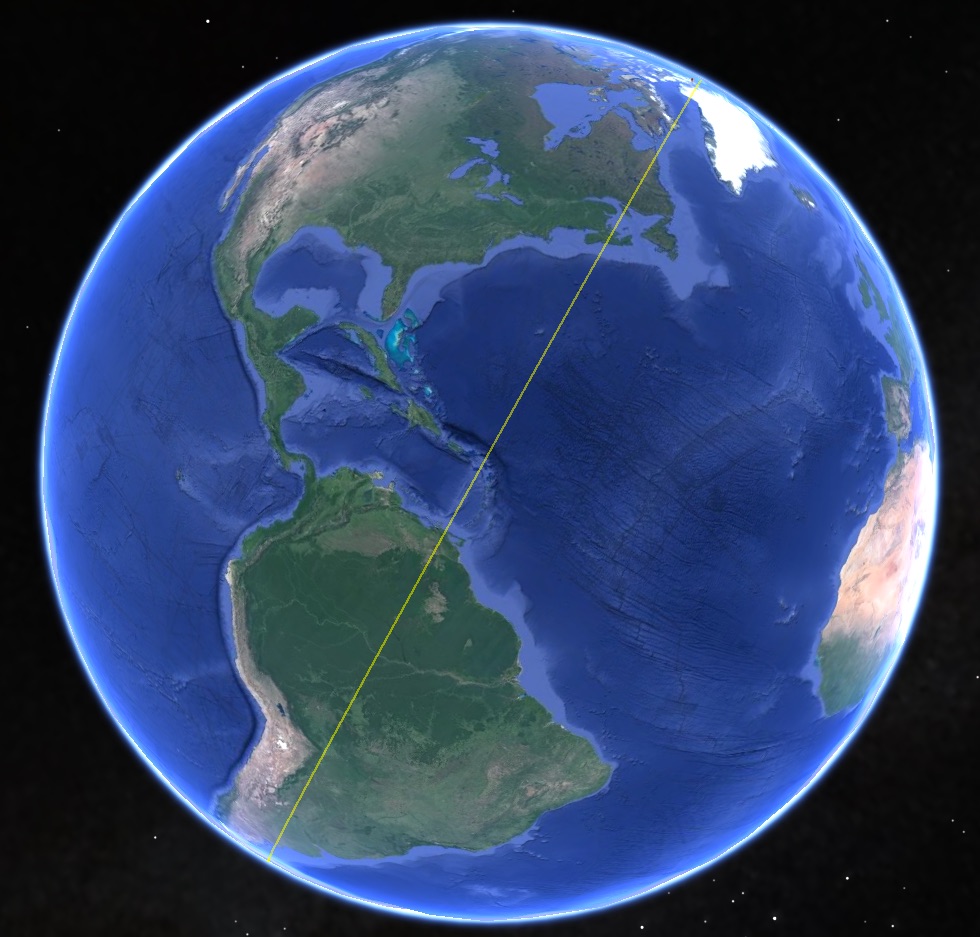 One of the nice features of Google Earth is that you can see the elevation of any feature of the map, including a path like this (just right-click on the feature in the sidebar and select “Show Elevation Profile”).

So, following the Charlottetown Meridian from the North Pole, through Charlottetown, to the South Pole, clamped to the sea floor, looks like this: 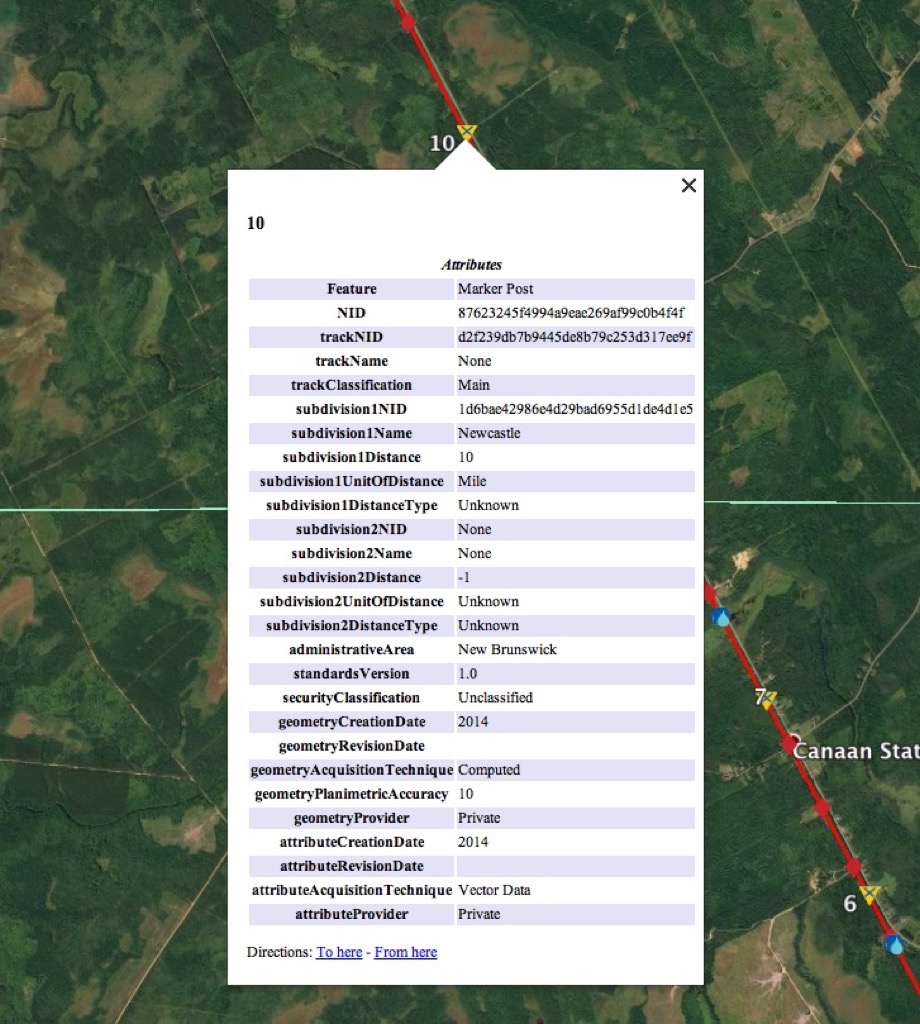 The Charlottetown Meridian passes through the following countries and territories:

From North Pole to South Pole is a distance of 20,036 kilometers; Charlottetown is about 4900 km along that route, so about 25% of the way around the Earth from the North Pole.

It’s fascinating to me to look at the Earth and how we slice and dice and measure it, especially when we take the slices in unusual ways like this.

The next step in the evolution of the Charlottetown Meridian, I suppose, is to organize an expedition to traverse it.