I have become diverted by an interest in the history of time on Prince Edward Island. To this end, ably aided by Simon Lloyd at Robertson Library, I have begun to explore the relevant legislation.

Here, for example, is a snippet from The Interpretation Act of 1939:

Let’s do some checking on the math.

There are 360 degrees of longitude, and 24 hours in a day, so each degree of longitude represents 4 minutes of time.

That means the a difference in time of 12 minutes and 29 seconds, which is the figure in the Act for the difference between the Provincial Clock in Charlottetown and 60 degrees west, would be 3.125 degrees of longitude.

Which, in theory, places the Provincial Clock at 63.125 degrees west.

And, sure enough, if I go to OpenStreetMap.org and navigate to the Coles Building – the contemporary name for the Law Courts Building – it is, indeed, at -63.125º. 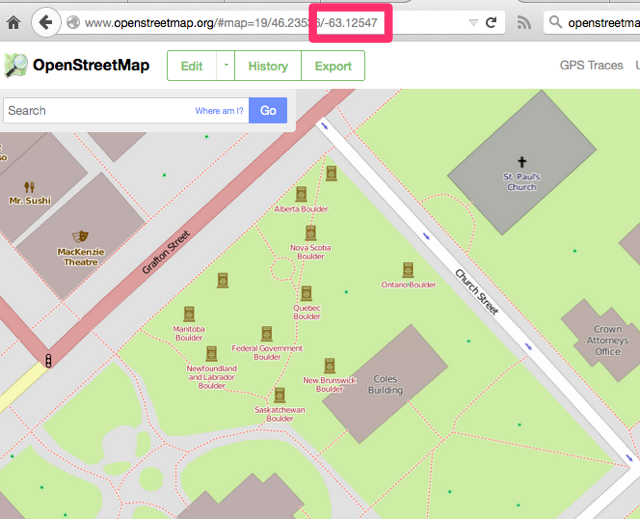 You can see this better-illustrated on the Atlas of Canada, with the NTS grid (National Topographic System) turned on. The major divisions on the NTS grid are spaced at 2º of longitude apart, and the minor divisions are spaced at 0.5º of longitude, so moving 3.125º east of Charlottetown you reach 60º west, which runs through the tip of Cape Breton: 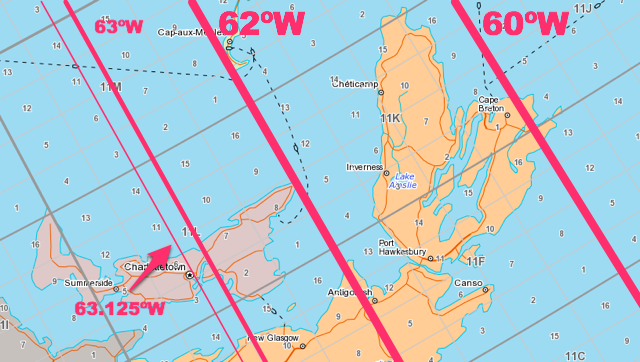 Or, like The Interpretation Act says, 12 minutes and 29 seconds later.

The time in the Atlantic Time Zone is based on the time at the 60th meridian, which is interesting to note because that meridian runs along the very eastern side of the time zone’s boundaries.  This means that although they are in the same time zone, though the sun rose today at 7:36 a.m. in Glace Bay, it didn’t rise until almost a half hour later, at 8:14 a.m., in Edmundston, NB.