Earlier this year I ran into my neighbour Christina on Prince Street and she told me that she’d just walked home from Charlottetown Airport; it only took 90 minutes, she reported, and had been a lovely walk.

I joined the Passenger Advisory Panel of Charlottetown Airport this fall, and our first meeting was scheduled for yesterday at noon. Inspired by Christina, and mindful that ground transportation would be one of the topics on the agenda, I resolved to get to and from the airport using novel means.

Believe it or not, you can get to the airport by public transit, a little-known feature of the city’s transit system.

Route № 11, the Airport to Winsloe North Collector, makes 7 counter-clockwise trips in the morning from Charlottetown Mall to the airport, a trip that takes 8 minutes, and makes 4 clockwise trips in the afternoon, a trip that takes 17 minutes. Given that the Charlottetown Mall is the northern hub of the transit system, it’s thus possible, with a transfer, to get to the airport from almost anywhere in the city. At only 11 trips a day it’s not enough service to rely on there being a bus for all arrivals and departures at the airport, but it’s also not nothing.

I caught the 11:15 a.m. Route № 1 bus from the Confederation Centre of the Arts on Grafton Street, arriving at the Mall at 11:30, and then transferred to Route № 11 at 11:45 a.m., arriving at the airport just before noon (note that the bus doesn’t actually go into the airport; you need to disembark at the corner of Maple Hills and Sherwood, before the bus turns left).

Both the Route № 1 and Route № 11 buses included a cowcatcher-style bicycle rack, which allowed me to take my bicycle with me to the airport for the route back. Which is exactly what I did; here’s my route as tracked by Google Fit: 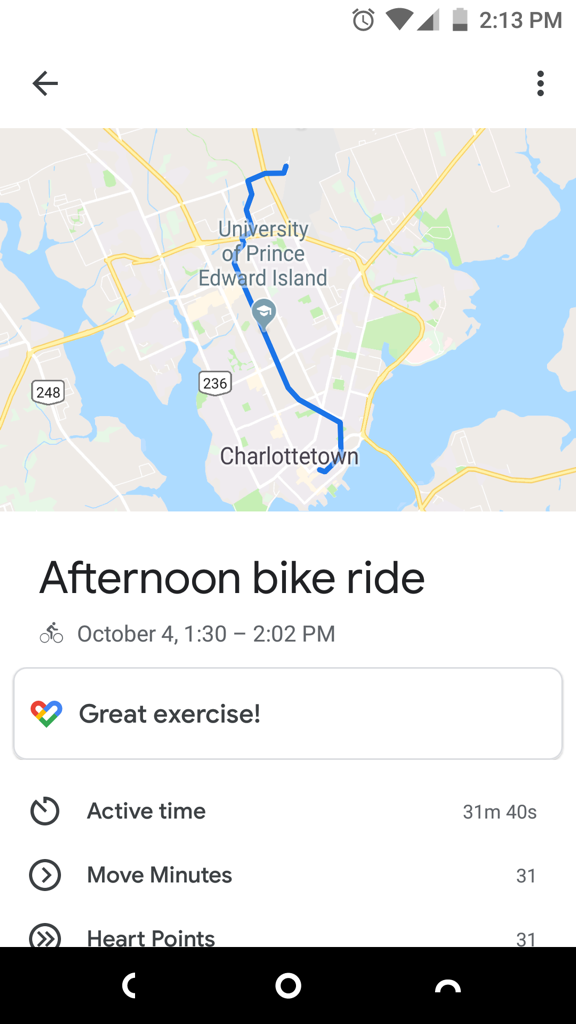 I rode out of the airport on Sherwood Road, through the roundabout and down the hill past the cemetery; when I reached the Confederation Trail I turned left and followed the trail all the way downtown, past the Charlottetown Mall, UPEI, the Experimental Farm and Joe Ghiz Park, emerging from the trail only when I got to Cumberland Street by the Maritime Electric plant. The journey was remarkably flat, with the only mildly-challenging bits being from the airport up to the roundabout, and the stretch that’s slightly uphill before UPEI. And most of the trip was on the trail, making it both car-free and scenic.

Remarkably, given that I’m not in shape, and that I faced a headwind most of the way, the journey only took 31 minutes from airport to my front door on Prince Street.

When ground transportation came up at the meeting I talked about my journey there and the plans for my journey back, and suggested that, while bus and bike might never be the predominant way of getting to and from the airport, it should at least be publicized as an option, if only to drive home the fact that the airport is among the most convenient to get to, by any means, of any airport in Canada.

The airport in Nice, South of France has almost got it right. The city of Nice has an ok bike share scheme, with rental hubs dotted around the city. The bike path along the seafront goes passed the airport (read further) and it is only a 20 min ride to the centre of town. It's a great way to/from the airport if you are travelling with hand luggage.

The downside: The bike path doesn't actually go TO the airport. The closest rental hub (these bikes are not drop anywhere, need to be returned to a hub) is along the highway bikepath outside the airport property, past the car parks, about 800m from baggage claim. To get there you need to walk along complicated exit roads and spaghetti junctions, know where you are going, make some guesses with google maps, and hope you don't find yourself under the overpass (in which case take the short climb up the slope and jump the low barrier.. Et voilà, there are the bikes.)

Don't know why there is no bike hub at the airport. Guessing licensing/access issues public vs private (airport) enterprise thing. Real lost opportunity. Still, it's Nice. You can probably rent a helicopter to the bike hub.

I recently mentioned the Bus option on my Facebook page, PEI GOOD News Only. I agree while there are limited runs, it's better than nothing. And it means I can go from Stratford to the airport for $2 instead of about $25. I also agree the run needs a lot more promotion.

I'm curious where you locked your bike at the airport. I contacted them today and they said they don't yet have a rack for bicycles. They expect one will be installed Spring 2019. Thank you!

That’s great news about the bike rack being installed soon. Without one I had to lash my bicycle to a road sign near the exit door.