The fleet of Charlottetown Transit is a patchwork quilt of ye olde trolley buses, castoffs from other transit companies (complete with signage in Spanish!) and, inexplicably, a thoroughly modern, comfortable bus kitted out with all the latest conveniences, including a “cowcatcher” bicycle holder on the front: 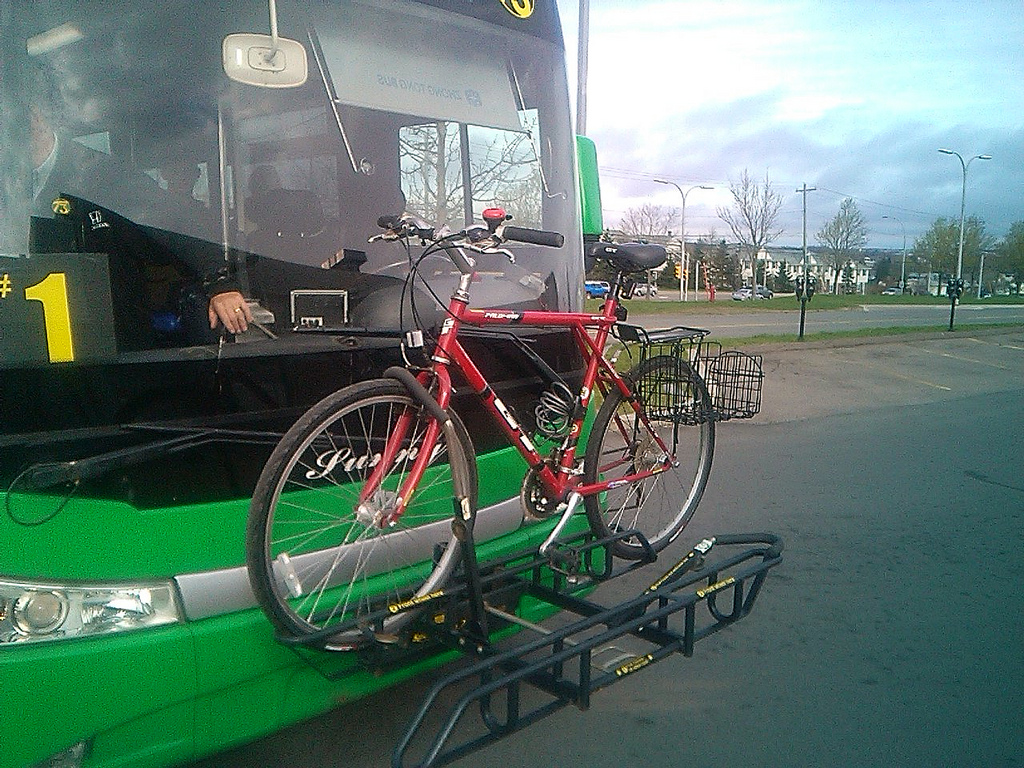 I spotted this bus earlier in the week and I phoned Charlottetown Transit to inquire whether it was a bus I could ride from downtown Charlottetown up to the University of PEI and was told that, alas, it was assigned to the “Cornwall run.” Later the same day – without my bicycle in tow – I caught the 11:30 a.m. University Avenue Express north and was surprised, in light of what I’d been told on the phone, to find that I was riding on the selfsame cowcatcher bus.

I called Charlottetown Transit back and received clarification: the cowcatcher is sometimes on the University Avenue Express line, but not on every run (they also confirmed it’s the only bus that you can carry a bicycle on; no bikes allowed on the ye olde buses).

Fast forward to this morning. With an email just arrived from my friend Don the Librarian up at the university – “will you be on campus today?” – I was riding my bike south from Prince Street School when I spotted the 8:30 a.m. cowcatcher idling in front of the Confederation Centre of the Arts. I pounced.

I wheeled my bicycle in front of the bus and signalled to the driver, who came out and showed me how the cowcatcher works: it’s a simple pull of the handle and swing down of the “catcher” and then there’s room to set two bicycles in place with a spring-loaded arm that raises to secure the bicycle in place around the front tire. The entire procedure took about 30 seconds and now that I know how I can easily do it without the driver’s assistance.

We sped north on University Avenue and 10 minutes and $2.00 later, again with the driver’s help, I removed the bike at the University of PEI stop and was off to see Don.

En route I heard my driver – an incredibly nice and helpful fellow – on the radio telling base that this was his first use of the cowcatcher, which made me proud (and gave me an excuse to snap the photo above) but also dismayed that more people aren’t taking advantage of this.

In Montreal they call this the Cocktail Transport and it’s something that fits my use-case perfectly: I don’t want to fight the (admitedly gentle) slope up University Avenue at 8:30 in the morning before I’ve had my coffee, so I throw my bike on the cowcatcher, fly up to the University, grab a coffee, check a book out of the library, say hello to my colleagues, and the roll down the Confederation Trail – downhill all the way – and am back downtown 45 minutes later.

You should really try this out: to make sure the cowcatcher is ready for you, call Charlottetown Transit before you head out – 566-9962 – and ask them to confirm with the driver on the University Avenue run (they can do this quickly by radio). Then, once you’ve confirmed, prepare to be amazing by the ease and elegance of the cowcatcher of hope!

Bonus hint: if you’re coming down the Confederation Trail from the north, headed downtown, after you pass Kent Building Supplies on your right take a right-hand turn into the John Street soccer fields, ride around the first field and then take a left out of the middle of the second field and find your way to Orlebar Street. Take Orlebar to Hillcrest and turn right, then take an immediate right onto Hillsborough, which is newly-paved and downhill all the way to Grafton. Here’s a map to illustrate the route.

These bike racks are convenient on Toronto routes. I’m glad that Charlottetown has at least one bus so equipped!