Earlier in the month I printed myself a fountain pen on my 3D printer. Without a nib assembly–the only part I couldn’t print myself–I wasn’t able to actually use the pen, however. This changed today when a Rosetta JoWo #6 Fountain Pen Nib, Ruthenium, Broad assembly arrived in the post from ipenstore.com. It screwed right into the barrel of the pen, I installed a J. Herbin larmes de cassis ink cartridge and, voila, I had myself a new pen: 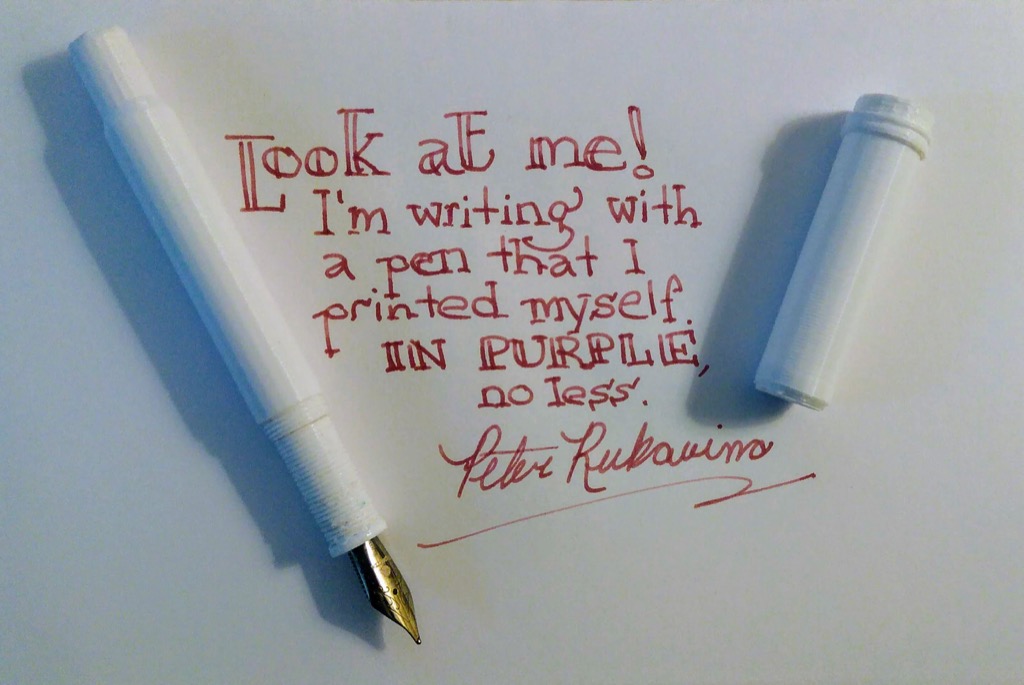 J. Herbin translates its larmes de cassis ink as “tears of blackcurrant,” which has got to be about the best name for an ink I can imagine; they continue: “this ink with a dark purple hue is the symbol of grievance and penitence.”

I will use the pen accordingly.

Regarding the Ruthenium-plated nib, my choice, it seems, was predestined; from Wikipedia:

Ruthenium is a chemical element with symbol Ru and atomic number 44. It is a rare transition metal belonging to the platinum group of the periodic table. Like the other metals of the platinum group, ruthenium is inert to most other chemicals. Russian-born scientist of Baltic-German ancestry Karl Ernst Claus discovered the element in 1844 at Kazan State University and named it after the Latin name of his homeland, Ruthenia.

My great-grandfather John’s record in the 1911 census shows Galicia as his “country of origin,” and Ruthenian as both his “racial or tribal origin” and “nationality.” He was born in Серафинці (Serafyntsi) in what is now western Ukraine, and arrived in Canada in 1908.

Oh wow, this is amazing!