Oliver turned 13 in 2013 (was there ever a more handy mnemonic!) and, given that he’s a teenager now, and a curious one at that, it seemed like the right year to elevate him to my official New Years Day levee-attending partner. He was game – enthusiastic even – and so we printed out the schedule, got warmly dressed for the -20ºC weather and called a cab for the hyperjump from Prince Street to Government House as a way of starting off gently.

Our timing was perfect: a gentle line and a roaring fire greeted us. And the rest of the day – 12 levees over 6 hours – went just as well. Oliver jumped into the levee cauldron with both feet, and by the end of the day when he shook Premier Ghiz’s hand, he was a master of the “Happy New Year.”

In the spirit of inspiring levee excellence, and after careful consulation with Oliver, here are the winners of the official 2014 Levee Awards:

Best New Levee: Queen Street Commons, with Trinity-Clifton United Church a close second. The Commons clinched this one with a nice mixture of people and food, and more well-turned-out-young-rockers than all the other levees combined.

Best Food, Catered: Premier Ghiz, no contest. From the “make your own mashed potato sundae” bar to the potato chips (the thick kind!) to the endless array of desserts and the well-constructed punch, we were able to skip both dinner and supper.

Best Alcohol: The Caledonian Club – another new levee this year – served a nice scotch, which was an unexpected treat. Honourable mention to Engineers PEI for a very nicely engineered sangria.

Best Costumes: A tie between the Bishop of Charlottetown, well-turned-out in his purple Bishop uniform, and the chap at the Masonic Temple wearing a crown, cape and carrying a sort of walking-stick-cum-magic wand.

Best Music: PEI Regiment, hands down. Not only is the regimental band a crack outfit, but they defy stereotypes by playing rousing renditions of Cyndi Lauper and Queen hits.

Most Ubiquitous Attendee: Wes MacAleer has won this every year for the past decade, but actor and bon vivant Bill McFadden surpassed him this year, with honourable mention to Guardian scribe Doug Gallant, who came close. That all said, I did see Wes three times today.

Most Improved: City of Charlottetown. After some dry years with bad catering, they’re back in fine form at City Hall. The City Police choir was a nice addition.

Best Receiving Line: PEI Regiment. Those soldiers look your right in the eye when they shake your hand, and they mean it when they say “Happy New Year.”

Most Informal: The Haviland Club used to run a military-style levee, with a formal receiving line and an Officers’ Club vibe. They’ve transformed things into a much more informal “thanks for stopping by our rec room; have a bagel and a sit-down out of the cold” style. The transition is confusing – especially their switch to a counter-clockwise rotation through the building – but it’s not an unwelcome change. 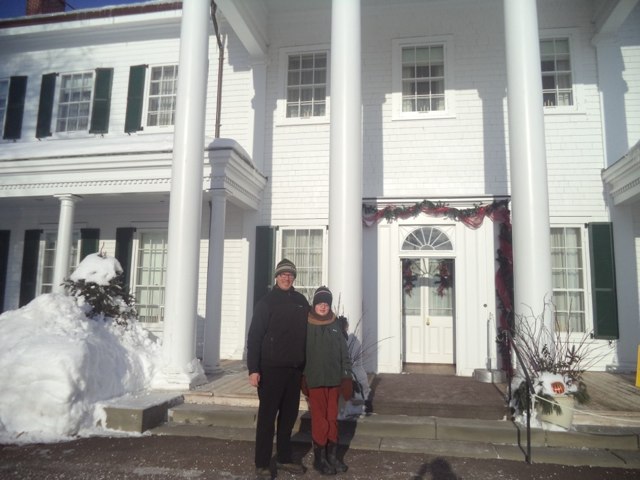 Great seeing you and Oliver at the Queen Street Commons’ levee today. I think the grilled cheese sandwiches set us apart!

Oliver’s choice of levee picture is excellent. Hope you place your calendar prominently. Only can disagree with one award as I thought Her Honour’s period dress was tops. I may be biased. Thank you for your list. Very helpful.

Glad to see/read that Oliver has started joining you for the levees. I have many fond memories of attending levees with Dad as a teenager, although for the life of me I cannot pinpoint when this tradition began. We used to do just UPEI (when it was at the Rodd) and the City of Charlottetown levees. As I grew older, despite being more likely to have a very late night beforehand, we added the Lieutenant Governor’s and the Premier. Last year, a new twist on the tradition began with Dad joining the receiving line at the UPEI levee as part of his Chairman of the Board responsibilities. As I understand it, the experience is very different, but not altogether unpleasant from the other side.

Alas, this year, for only the second time ever, I left the Island before the New Year and wasn’t able to partake in our lovely leveeing tradition.

All the best in 2014 Peter. Perhaps I’ll see you at the levees next year!