Thanks to Keir at Spry Point, I’ve had the loan of a Grid Insight AMRUSB-1 for the last week. I connected it to as Raspberry Pi, wrote some code to take meter readings it received and archive them and then left it running here in my downtown Charlottetown office for a week.

The code got gradually less buggy over the week: when I first started running my archiving daemon it wouldn’t run for longer an a couple of hours, something I traced back to a combination of a flaky USB wifi dongle and lack of proper exception handling in my code. In its current state I’ve had the daemon running problem-free for more than 24 hours.

From the afternoon of September 7 to the morning of September 12 I archived 2,901 readings; of these, 1,018 were unique (the AMRUSB-1 simply readings broadcast readings, whether there’s been a change in reading or not, and my code simply archives everything).

The number of readings from any one meter ranged from 1 to 397; because the frequency of updating is likely the same across meters, the variation, I am assuming, is because distant meters were received less often.

Poking around the basement of my office building, I found the water meter, with an Itron ERT device strapped to it, with the meter serial number printed on the outside: 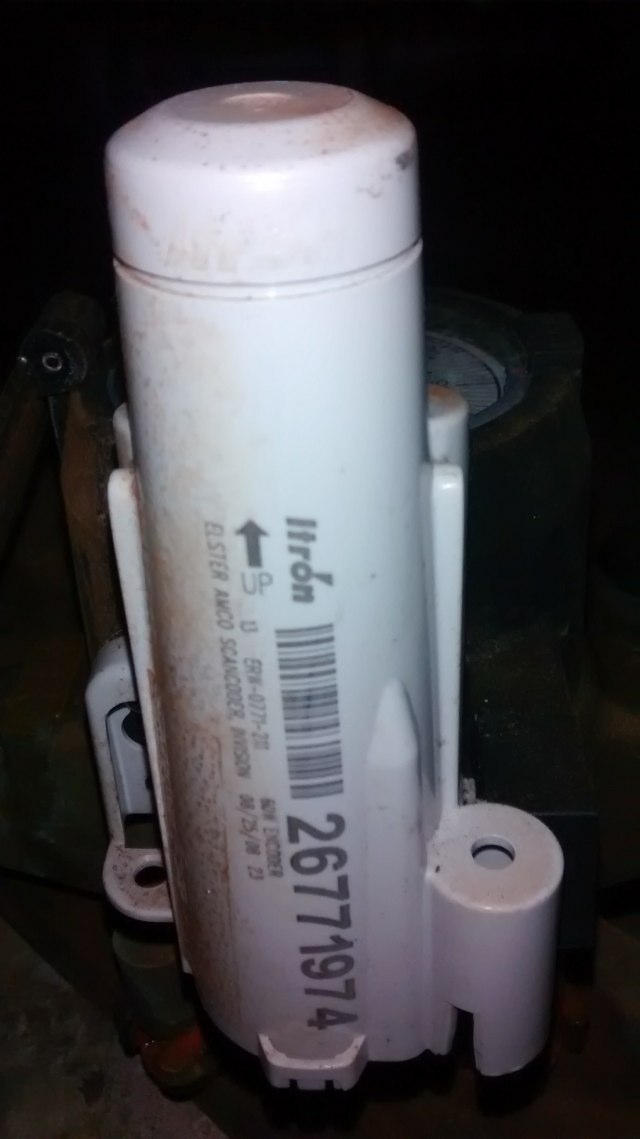 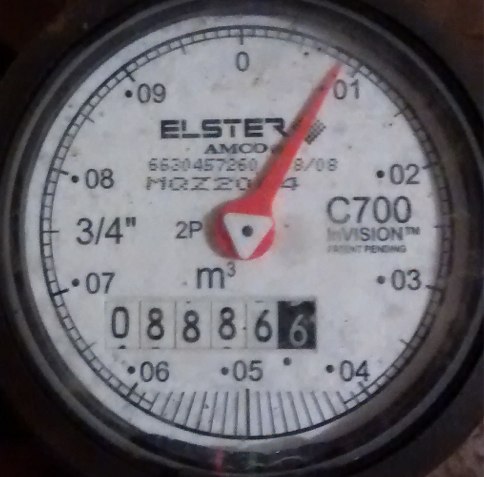 This means the delta in my first example is actually only 4 m3, or 4,000 litres.

The most-frequently-archived electricity meter, with 376 readings archived, started the week with a reading of 31,890 and finished the week with the same reading, suggesting it’s either a dormant meter or one connected to something that uses less than 1 kWh of electricity in 5 days. The same thing was true of the next 3 of the other most-frequently-archived meters, each of which show less than 1 kWh of usage.

The most-frequently-archived electricity meter that actually showed usage had 169 readings archived, starting with 856213 and ending with 860676 for a delta of 4,463, which I presume is a measurement in kWh. At the rate I pay for electricity at home – 12.78 cents per kWh – that’s $570 worth of electricity, or about 5 times what our house uses in an entire month. Again, it would be interesting to know whose consumption this is.

The term of my loan is up today, so I’m returning the AMRUSB-1 with gratitude; my own replacement, purchased last week, is in transit along with 4 others that will be placed in volunteer households under the Social Consumption Project.