My late friend Laurie Kingston published a book in 2009, Not Done Yet, her tale of being diagnosed with, and living with, metastatic breast cancer. I accidentally found my way to the book on my own, years before Catherine herself was diagnosed with the same cancer, and I will be forever thankful to Laurie for unwittingly preparing me for something about what was to come.

Early in her book, in the chapter What (Not) to Say, Laurie wrote:

It’s not easy to know how to respond when someone tells you she has breast cancer, but for goodness sake, say something. As hard as it is, and as awkward as you might feel, it is worse to say nothing than to mutter a few heartfelt words.

When Catherine was diagnosed–a process the spun from biopsy to single mastectomy to double mastectomy to, oh, no, wait, none of that, it’s  incurable-but-treatable in a dizzyingly fast progression–I realized that part of my job was to manage the flow of information to Catherine’s family, friends and familiars: I knew that having to update everyone she knew about the latest scan, or how she was feeling, or what she needed, could quickly sap her of her increasingly scarce energy.

So I did what comes naturally: I started an email newsletter.

Apologies for moving so quickly from handcrafted individual emails to a mailing list, but I was beginning to lose track of who I’d told what about Catherine and her progress, and this seems like a way of doing so that’s sustainable, but without the publicness of a blog, which would make Catherine uncomfortable. Catherine has, however, blessed this alternative.

It’s been a month since I last updated you all on Catherine. At the time of my last update Catherine was in hospital; she ended up staying there for a week, primarily to allow her to rest, get re-hydrated, and get herself on an even keel after a challenging recovery from her radiation treatment and the restart of her oral chemotherapy.

Catherine lived for more than five years with her incurable-but-treatable condition, until her death in January of this year.

Going back this fall to re-read the tale of ups and downs and forks in the road, of radiation and chemotherapy, experimental treatment, and an ambulance running over her cell phone, I came to think that while the words weren’t written for public consumption, they might be useful words to families finding themselves on a journey similar to ours, and people supporting them. So much of the anxiety of living with cancer, and supporting someone living with cancer is fear of the unknown; while everyone’s path is unique, I knew from having read Laurie’s book that having some sense of the terrain could be useful.

And so I turned those words into a book.

Itself all a somewhat harrowing experience, both because book design was something I hadn’t practiced for a quarter century, and, more so, because doing so took me back to relive a lot of really hard experiences.

A box of those books arrived today, and you can purchase a copy locally from The Bookmark in Charlottetown, or order a copy by mail from my Queen Square Press shop.

To give you a taste of what to expect, here are the first 20 pages of the book as a PDF.

Two days after Catherine died, I wrote, both here and in the newsletter:

I’ve learned in the last 48 hours that I can’t outrun grief through writing, though: it has its own rules and schedules, and, despite my delusions to the contrary, you can’t write an essay and earn an exemption. But I am finding that you can earn some extra credit.

Thank goodness for that extra credit: beyond any service to Catherine and her circles, writing was how I managed my own way. And having the opportunity to revisit those words, and those years, has been, yes, harrowing. But also healing.

Thank you to my mother Frances for editing assistance, my sister-in-law Karen for coming up with a subtitle, my brother Mike for offering me words of encouragement, and to Oliver for being my son, and for putting up with more than usual frozen pizzas while I’ve pulled all this together. 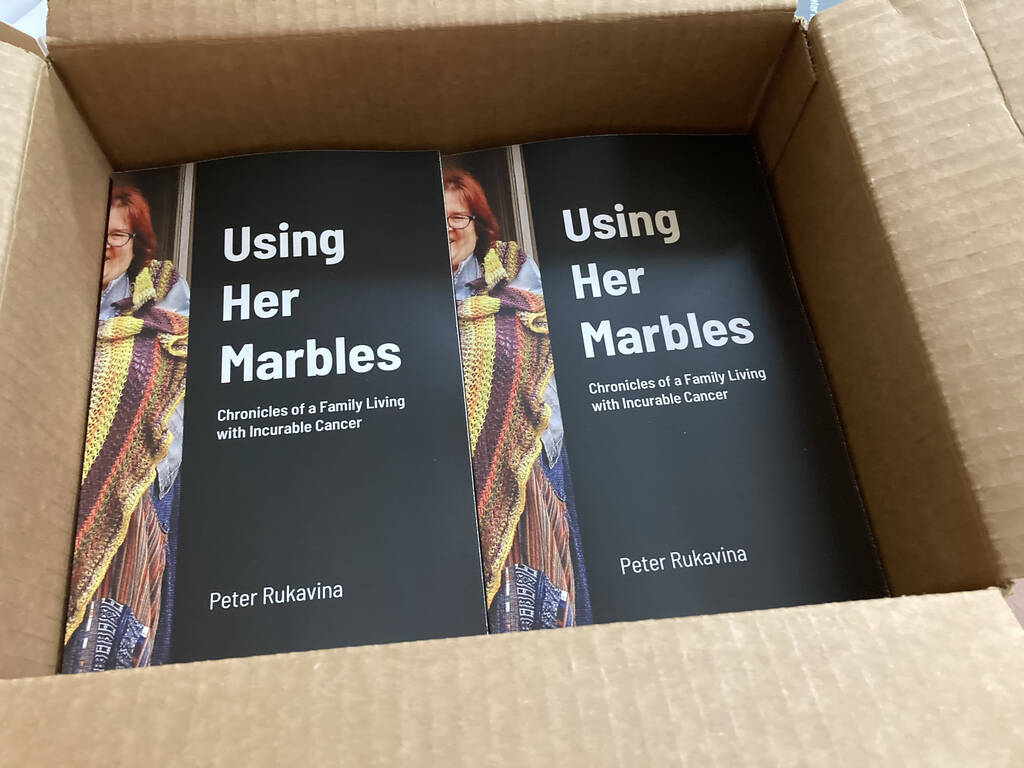 This is awesome, Peter. I've been reading your emails those 5 years with appreciation and admiration. Appreciation for keeping us informed and for taking us along for the journey, and admiration for you putting that journey into words while Catherine, you and Oliver were living it, in the midst of it. Turning those emails into a tangible book, something physical, is a new manifestation of that journey. A great project, and a great title.

Good for you, Peter! Your writing is a gift to the world. You are so right in thinking that this will be useful to other families on a similar journey. This just gave me a huge smile.