Ever since it became possible — because of high-speed Internet and good audio tools — to “do radio on the web,” I've been itching to dust off my interest in radio and start recording. Today the dream was realized, with the recording of the first episode of Live From the Formosa Tea House.

Using Adam Curry's Daily Source Code, Dave Winer's Morning Coffee Notes and The Gillmor Gang as inspirations, Dan, Steven and I gathered, as we do two or three times a week anyway, at the Formosa Tea House here in Charlottetown. Except this time we brought audio gear.

The AAC version will be especially useful if you have an iPod or use iTunes, as, at least in theory, these should “remember where you left off” if you take a break.

This isn't a polished radio program — it's sort of a combination of sticking a microphone on our lunch table, with the extra self-conciousness of the microphone making us each a little stiff. I don't think we knew who we were talking to really — each other, “the Internet,” or the invisible folks at home.

I certainly learned a lot (or at least remembered a lot) about why radio is so hard to do well, why it's so hard to achieve that balance of the formal and the informal and “sound natural.”

We'll go back again next week, though, and give it another go. I'm sure Steven and Dan will comment on their blogs about how things went from their perspective.

Update: Steven has posted some photos (one, two, three) of our recording rig. We used a boundary mic, which because it was phantom powered, needed to run into a Shure mixing board, the output of which ran into a iMic that ran into my iBook. I used Sound Studio to record the programme to a 350MB AIFF file, and iTunes to generate the MP3 and the AAC. 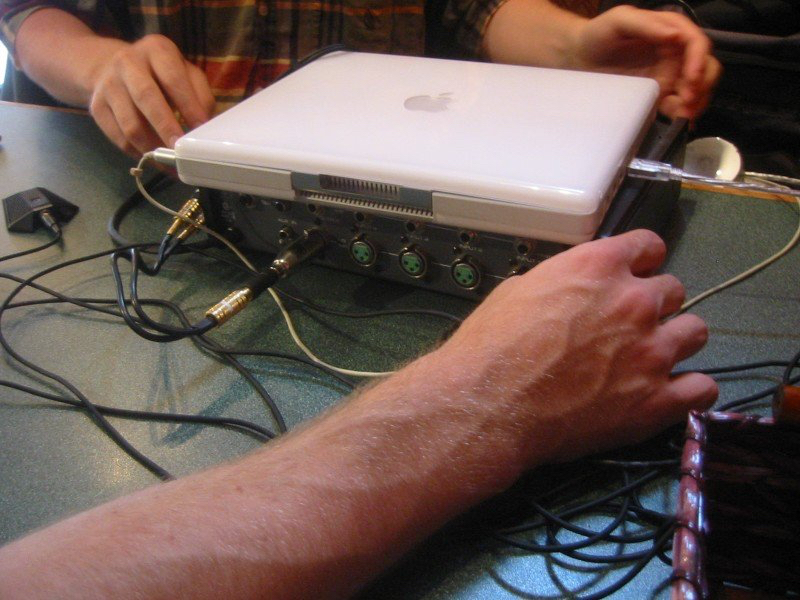