Being a sole practitioner here on the blog, I’ve no copy editor. In the early days of blogging we all wore the absence of intermediation as a badge of honour: copy editing was a relic of the old school; we were rough and ready and off the cuff.

But as I age, and my mind enfeebles, and my vanity upticks, I’m increasingly sensitive to making obvious mistakes: double words, misspelled words, mistakes in punctuation and so forth.

To try to stanch some of this, some months back I started using the text-to-speech features of my Mac to read posts back to me after I’d written them, leaving an editor window open to allow me to correct errors as I heard them; in doing so I’ve discovered that although it’s no means a skilled copy editor, my aural brain thinks differently from my reading brain, so issues I could not see I can clearly hear. It’s helped. At least a little.

Yesterday I made a discovery that made this even easier: baked right into recent versions of Firefox is a “Reader View,” and that view has a “Narrate” tool that reads the text out, and highlights words and paragraphs as it goes along. This combination is a big aid to proofreading; it looks like this when turned on for this post: 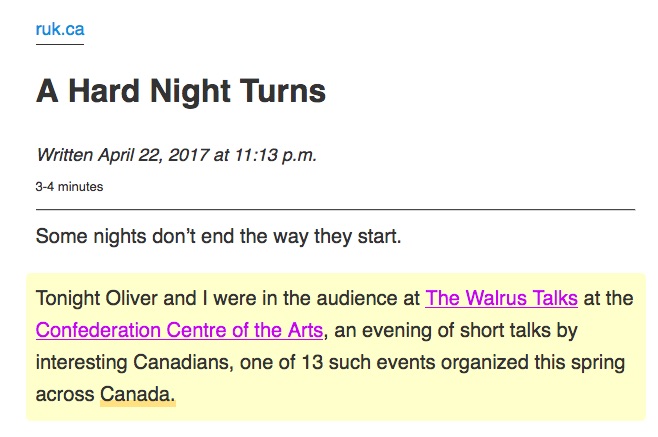 What really clinched it for me, however, was switching the voice for the narration from the default to Moira: 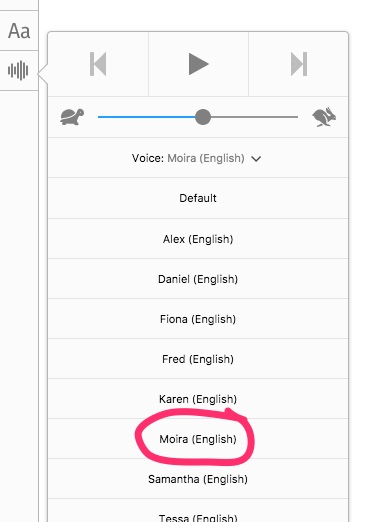 Moira speaks with an Irish accent (you can hear her reading by listening to the sound attached above), which means both that she’s more likely than not to pronounce things as they are meant to be said (she does an excellent job at MacLauchlan, which the default voice just can’t wrap its mouth around, for example). And, more importantly for proofreading purposes, Moira’s voice plays to a different part of my brain yet again, allowing me to hear errors I could neither see nor hear if read in a voice closer to my own.

I’m still as prone to making errors as I’ve ever been, but with Moira’s help at least I have some help in finding them before you do.