A wayzgoose is the delightful term applied to a gathering of printers for merriment, display and exchange of wares, education and discussion. Regular readers may recall that I made the trip to Kentville, Nova Scotia in 2010, accompanied by Erin Bateman, for the Wayzgoose at Gaspereau Press. It was a grand event, and primed the pump for similar opportunities thereafter.

In this spirit, thus, this trip to Europe was arranged with two bookends: at the start was Olle and Luisa’s 10th anniverary in Malmö, on the other end was today’s St Bride Foundation Wayzgoose here in London.

While the newspapers of Fleet Street have all departed and the printing trades have been gutted by technology, St Bride Foundation remains: it shepherds one of the world’s foremost collection of books on printing; it holds regular printing workshops in its well-appointed print shop; it even has a bar in the basement.

The annual Wayzgoose is something of an old home week for St Bride: the space is given over to exhibitors of equipment, prints, type, paper and books. There are cakes, tea and coffee. The workshop is full of demonstrations. And there’s lots of opportunity to chat. 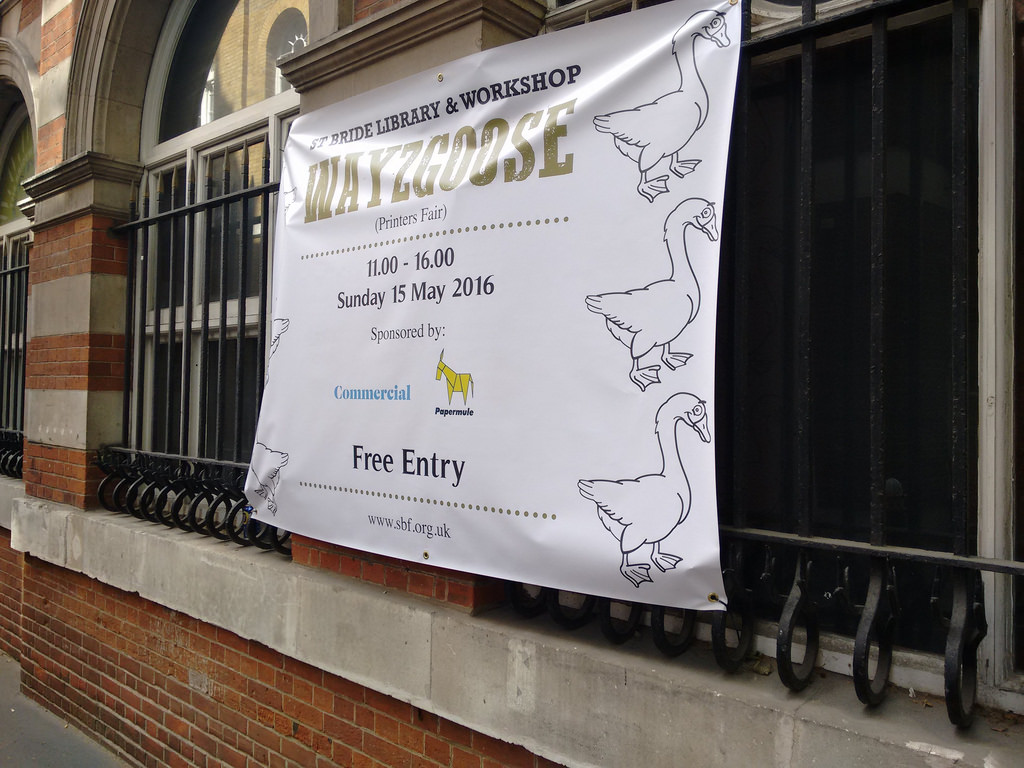 I arrived as the clock struck 11:00 a.m. and the doors opened; I departed nearly 3 hours later.

My first conversation was with the owner of Caslon Limited (yes, that Caslon). The company acquired the Adana line of platen presses in the 1990s and continues to make, service and sell parts for them today. My first press, via my friend Joan Sinclair, was an Adana Eight Five, and I purchased rollers for the press from Caslon soon after it came into my possession. So meeting Mr. Caslon was both an honour and an opportunity to learn more about both the history of the company and what parts they have available to replace those on my press that need it. 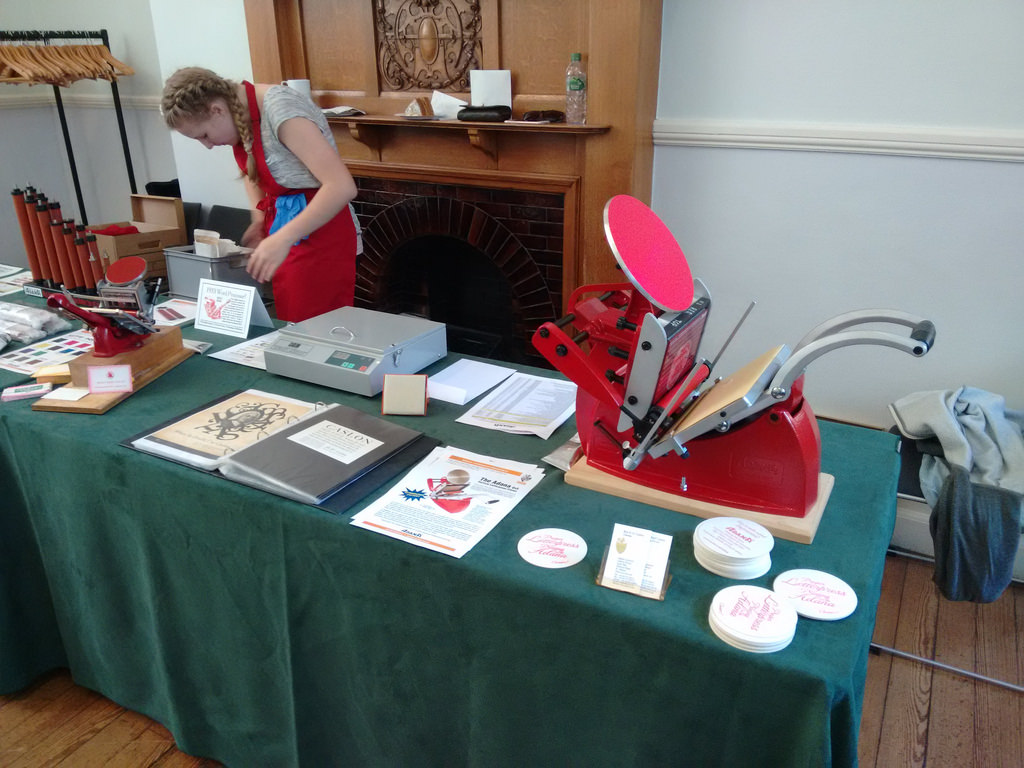 Space in my compact luggage is at a premium, so there was lots I would have liked to acquire but could not. But I did come away with tiny letterpress-printed books from a variety of small presses, and each purchase provided an chance to chat and learn.

I also purchased a container full of type-high solid squares, something I’ve been looking for since I started printing; I hope to use them to print QR codes on my press, analog style.

And it was hard to resist a book, on sale for only 50 pence, that contains, among other things, the rules for the printing trade chapels circa 1900.

The St Bride Foundation Library was used as a gift shop for the day, so wasn’t available for exploring, but even just the collection of books on offer there for sale could have kept me going for hours: 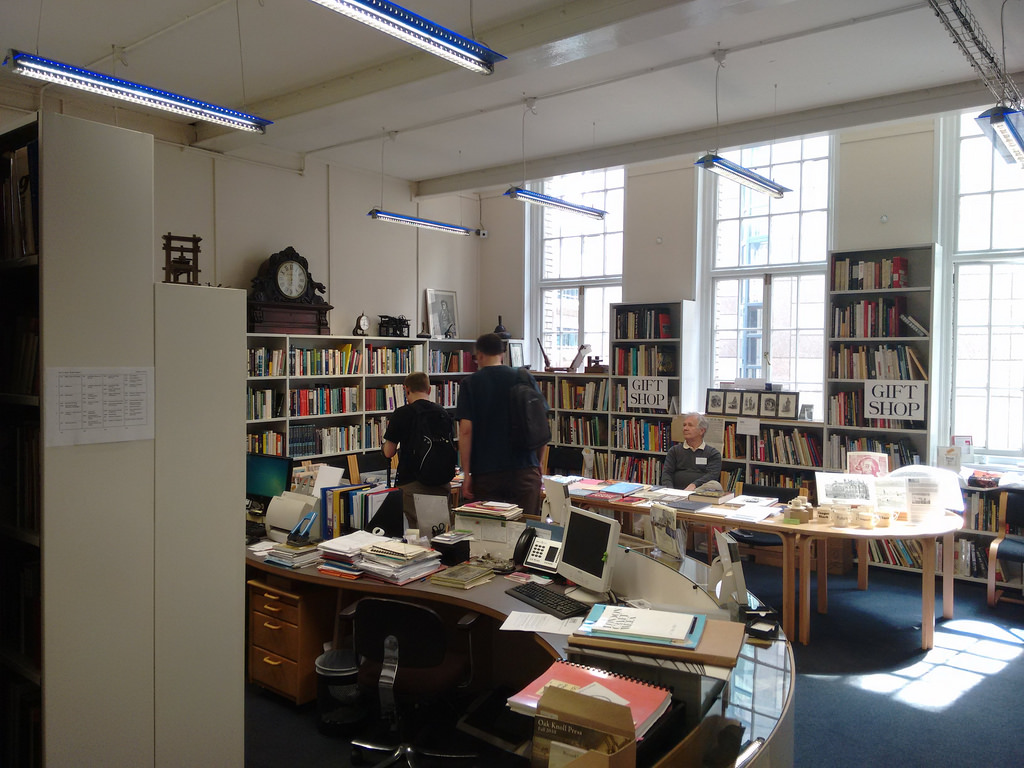 The refreshments table, set up upstairs, was equally impressive, and though I’m not a regular consumer of cake, how could I but not partake, so I had a strong cup of English Breakfast tea and a slice of very nice coffee cake: 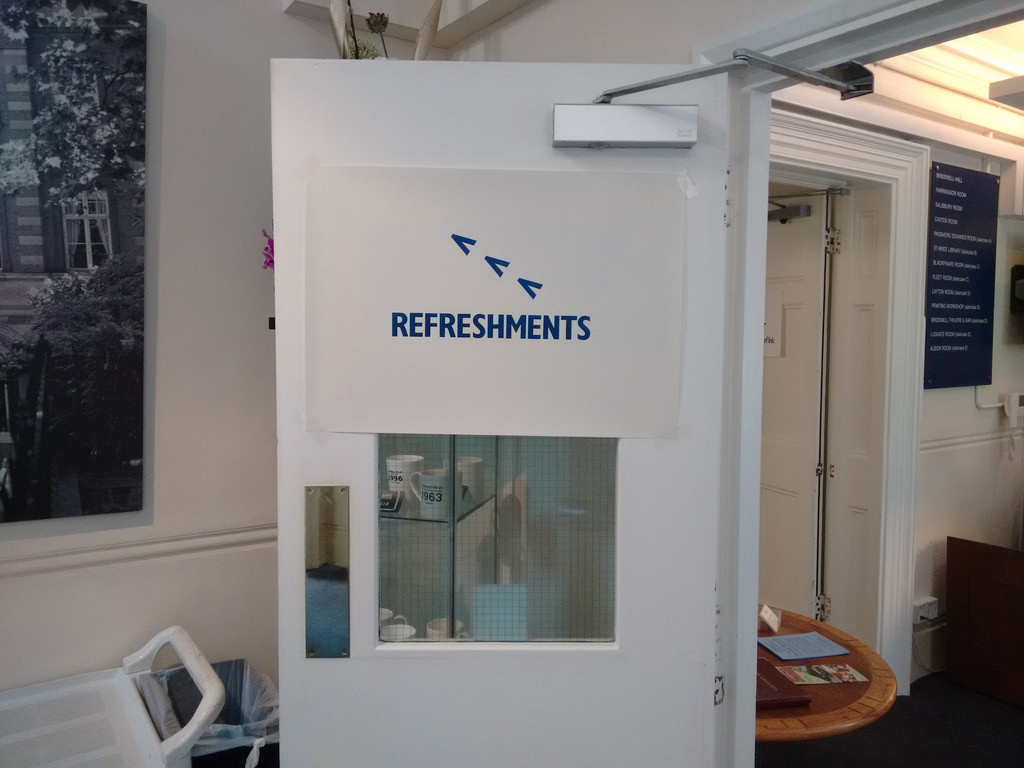 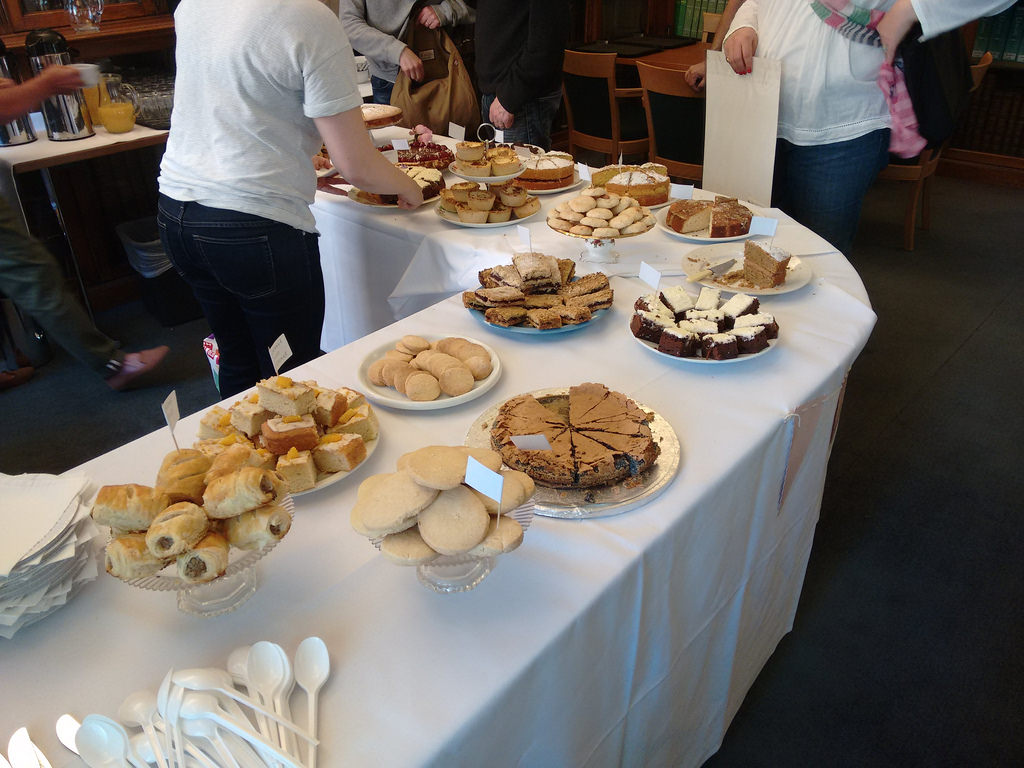 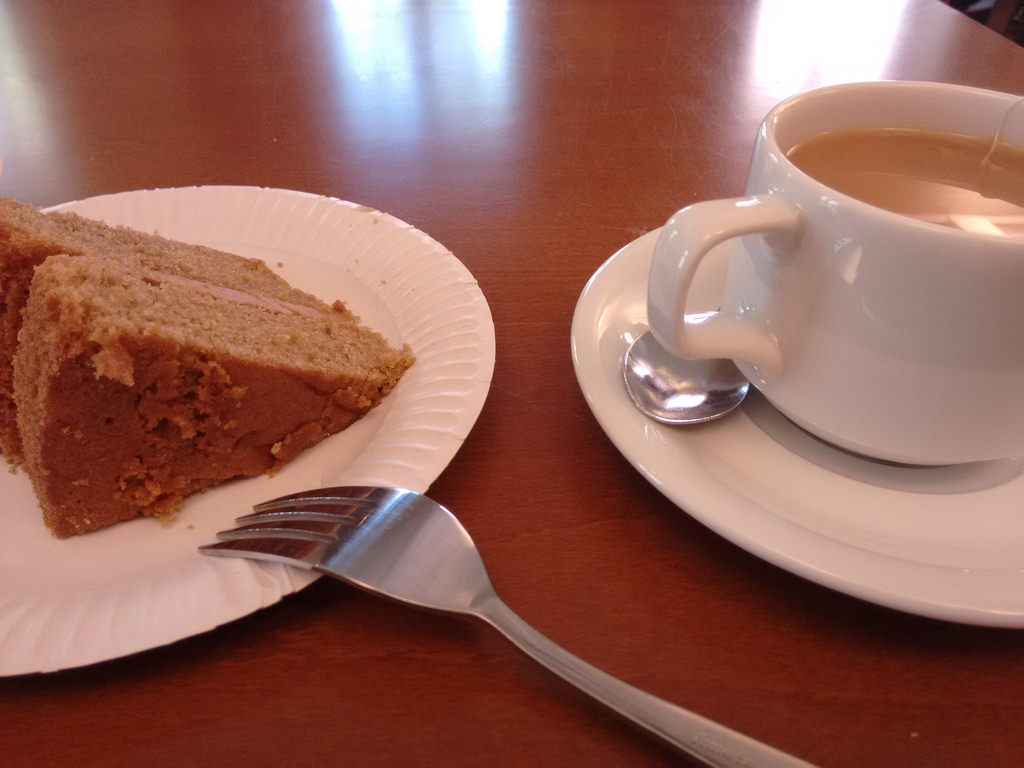 By far and away the highlight of the Wayzgoose for me, though, was the opportunity to talk shop and share war stories with retired Fleet Street printers.

The “Tour of the Street of Ink” room saw printers telling the technological tale of how metal was turned into moulds and then turned into plates for the presses.

In that room and elsewhere I got a good chance to talk shop, swapping my own humble tales of working as a compositor (albeit one generation of technology on) for their stories of unions and work rates and newspaper barons. I found ready agreement for my suggestion that the removal of compositors from the process of daily newspaper production meant that reporters and editors were left without daily contact with members of the working class and that journalism suffered as a result. My apprenticeship continues to pay dividends as a key that opens of a treasure trove of printing lore. 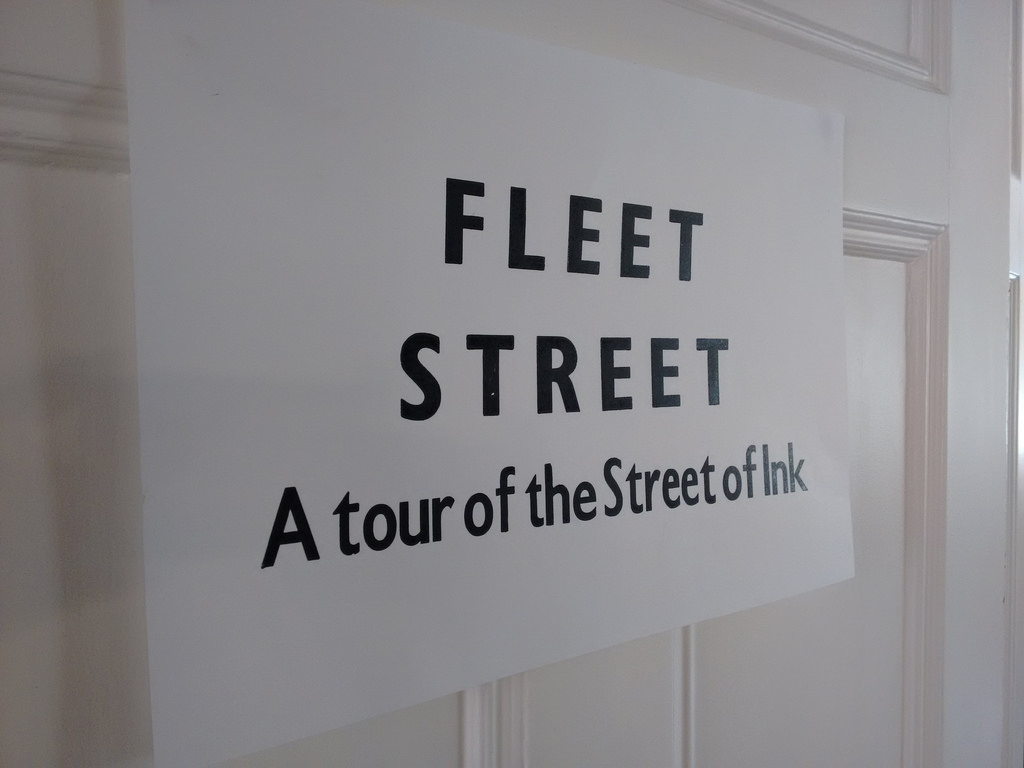 One floor below, the printing workshop was set up with several demonstrations: you could learn how to fold a printer’s hat out of newspaper, watch a new-built Gutenberg-style press in action, and print bookmarks and other keepsakes on the small platen presses in the shop. 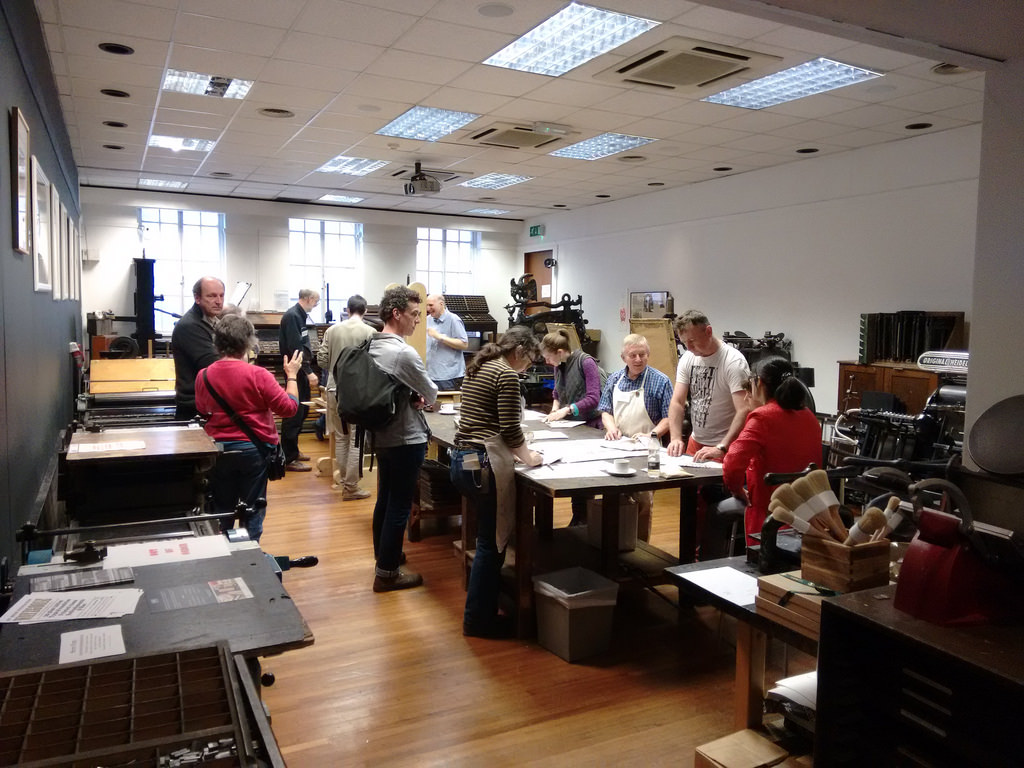 The world is so much better for having institutions like St Bride Foundation keeping knowledge of and fraternity within traditional trades alive; I’m so glad I made the effort to attend.

The spirit of the day, and the compact size of the letterpress community, was driven home for me while I was waiting in St Bride’s Passage for the Wayzgoose to start.

A fellow sat down beside me to tie his shoes.

“Are you one of them,” I asked, motioning at the St Bride building.

Of course I know Don Black.

Don Black sold me my first drawer of type. And I’ve returned several times to purchase everything from leading to a solvent can.

And so I wrote down his name, and he mine, so we could share the news of our meeting the next time we talk to Don.

I love typography. I love setting type. I love printing what I’ve set. I love the physicality, the hard limitations, the history and the tradition. But more than anything else I love feeling part of a small, open, collegial, community of printers. All of whom know Don Black. 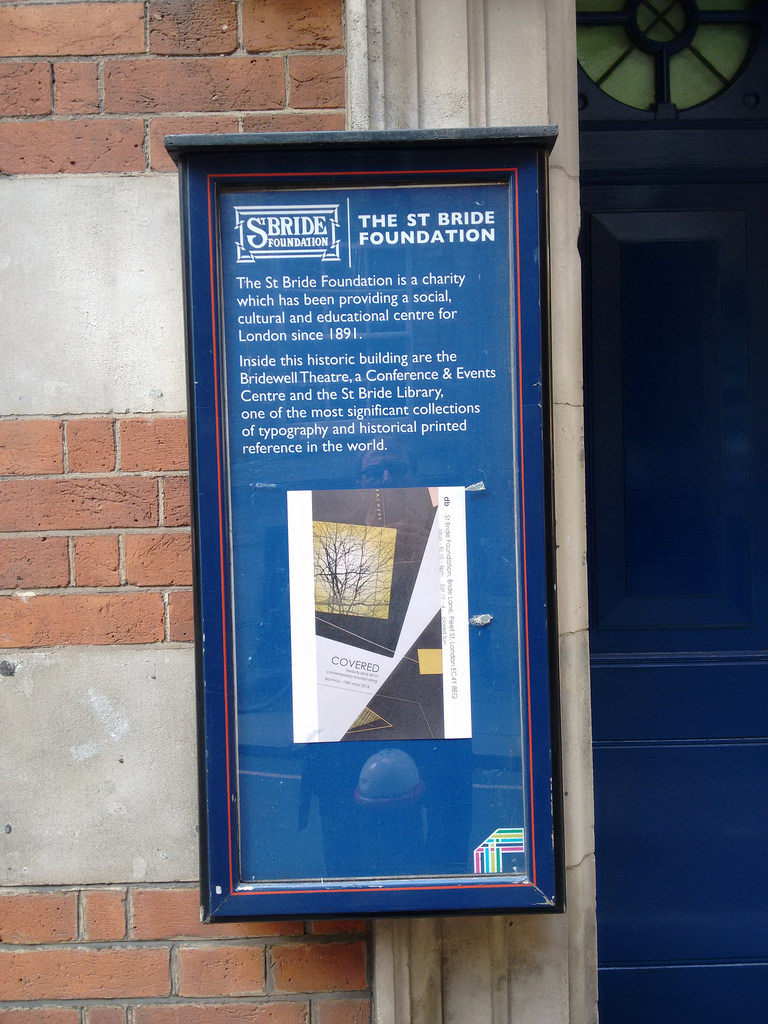