Node-RED is, like IFTTT and Yahoo! Pipes, a visual tool that lets you plug things together to create workflows. What sets Node-RED apart is that it’s specifically designed to enable workflows that reach into the physical “Internet of Things” world: data flowing in on a serial port, for example, or the state of GPIO pins.

It’s also something best illustrated by example, so here’s a walkthrough of how I created a display for the water meter in my office at The Guild in downtown Charlottetown.

To construct the water meter I used the following hardware:

Here’s what the Node-RED workflow I created looks like when it’s done: 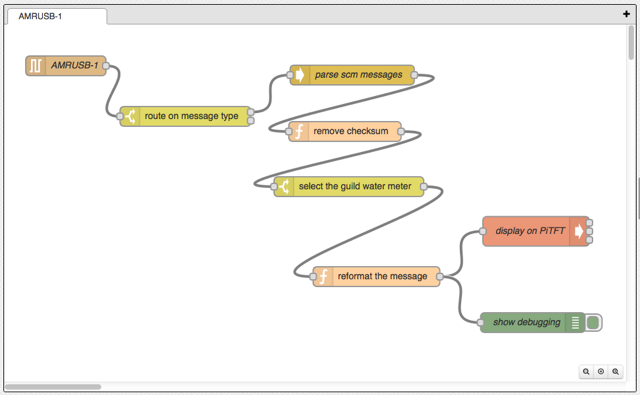 Each of the nodes in the workflow does something – reads data, processes data, outputs data, and so on – and they are wired together in a way that routes that data from node to node. Double-clicking on any node shows its details.

Read Data from the AMRUSB-1

The details of the serial port setup look like this: 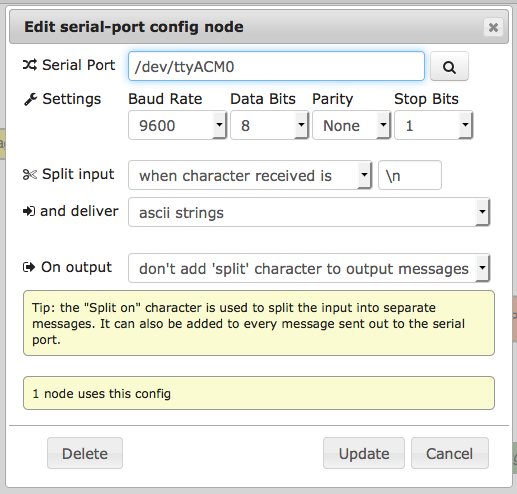 This is set up to send one Node-RED message for every line that’s received from the device (lines end with “\n”).

The AMRUSB-1 received two types of meter reading messages, SCM and IDM. We’re only interested in the SCM messages, so we use a “switch” node to split the workflow into two based on whether UMSCM or UMIDM is found in the message: 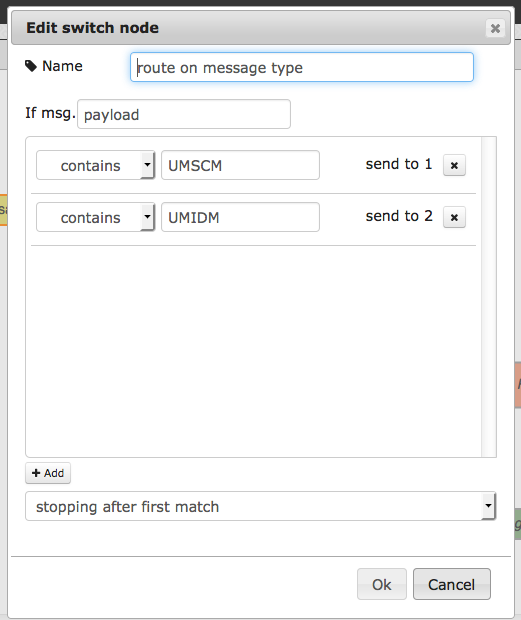 Each SCM message is a comma-separated set of values: the message type, the meter serial number, the meter type, and the meter reading; using a “csv” node, we split these into individual values: 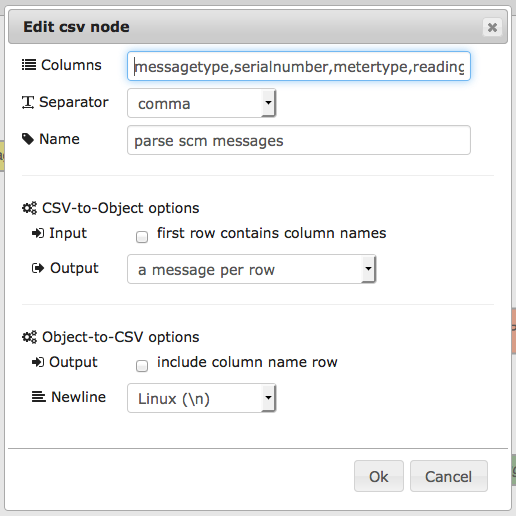 Remove the Checksum from the Reading

The final CSV value, “reading,” has a checksum value appended to it, beginning with an asterisk; we need to remove this, so we use a “function” node containing a simple line of JavaScript: 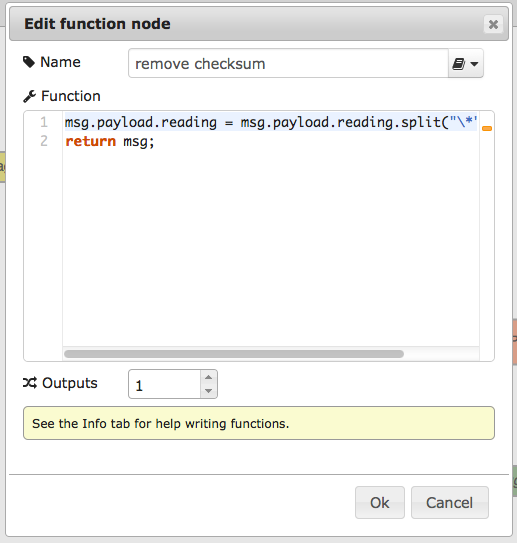 Select only The Guild Water Meter 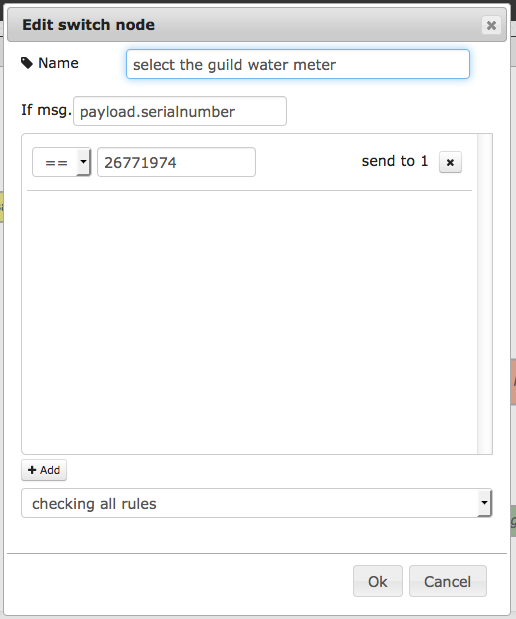 Reformat the Message for Display

We want to display the message on an external display in the format Water Meter X m3 (Y m3 today) where X is the absolute value of the meter, and Y is the difference from the first reading taken. We use another “function” node to do this, using JavaScript to do the heavy lifting: 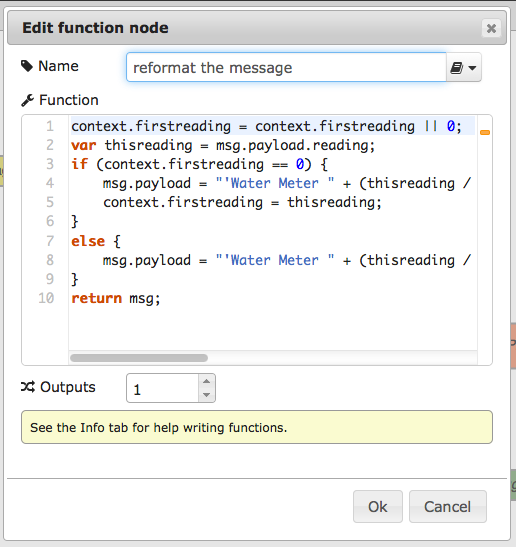 Now that we have the message, we want to display it on the PiTFT display connected to the Raspberry Pi. To do this we use an “exec” node to call a shell script on the Pi, display-on-pitft.sh, that displays the message using the fbtext utility to draw into the framebuffer: 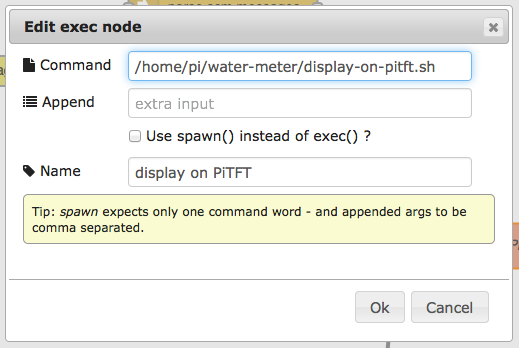 To start, I kill off any previously-running instances of fbtext; this means that processes don’t build up and keep running everything I update the display.

The $1 is the text of the message coming from Node-RED, fbtext is the executable (compiled from source obtained from here with guidance from here), /dev/fb1 is the PiTFT display framebuffer, Inconsolata-38.bdf is a bitmap font that I created from the Inconsolata OpenType using FontForge and the final dash says “read the text from the standard input rather than from the filename that I would otherwise specific here.”

Messages can be routed to multiple nodes; to double-check what I’m sending to the display, I use a “debug” node to show the same message in the debug tab of Node-RED; it looks like this when the workflow is running: 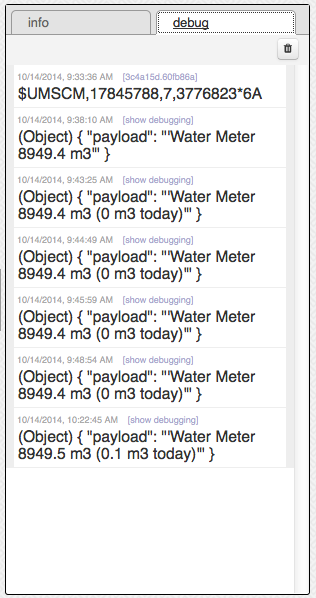 Once I deploy the workflow in Node-RED, it starts listening for AMRUSB-1 messages; when it receives one, the messages are parsed and reformatted and then end up on the display of the Raspberry Pi: 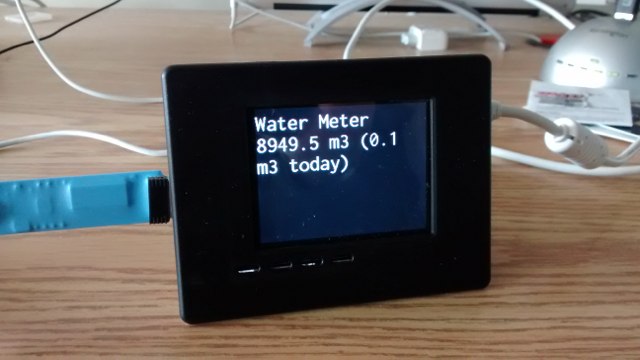 The “today” measurement isn’t really “today’s” usage, it’s the usage since the workflow started to run; I’d like this to be smarter.

I’d like Node-RED to auto-start when the Raspberry Pi boots; that way I won’t have to start the workflow running from my Mac via a browser as I do now.

And it would be nice to have the display be more information rich, with a larger typeface for the meter-reading and perhaps some graphical representation of the measure.