Hi there. I’m Peter Rukavina, and this is where I write.

I’ve been writing in this space, in various incarnations, since May 31, 1999.

Where it all started…

Back in 1999, my little web company, digital island, changed its named to Reinvented. So I needed a new “corporate website.”

In the midst of writing prose for this new site on the order of “Reinvented is a world-class company that creates leading-edge, top of the line websites for international companies and governments,” I realized that I simply didn’t have it in me to inflict this degree of hyperbole on the world.

So I decided I would simply write a little bit, every now and then, about my clients and my work and my friends and my city. It was a “weblog,” although I didn’t know that at the time.

I kept posting under the Reinvented corporate banner until I realized that Reinvented, since expanded to 3 employees, was no longer just me. It didn’t seem fair to continue to spread my peculiar take on the world under the collective corporate voice.

And so was born ruk.ca, the weblog you are reading now. When I made the switch, I brought forward all the old Reinvented weblog posts to live in this new home, and this is where I’ve hung my digital hat ever since. 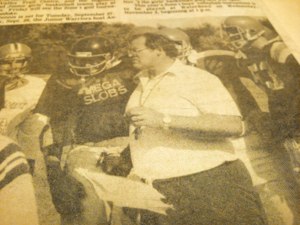 Back in grade 9, at Waterdown District High School, Mr. Brescacin was my gym teacher. He was a large, bellowing man with a large, bellowing personality. He was the archetypal “tough but fair” teacher: no matter how much of a dork you were, you never got less than 70% in his class as long as you showed some effort.

And Mr. Brescacin called me “Ruk.” I would be across the gym, executing some move incorrectly, and I would hear “hey, Ruk, use your arms!”

So this site’s name is, in part, an homage to that memory. I hope I’ll always write tough but fair.

In July of 2009 I migrated the site to use the open source Drupal system and in May of 2014 I upgraded from Drupal 6 to Drupal 7.