Twenty-five years ago, when Catherine and I moved to Prince Edward Island, our early experiences suggested that the Island was a magical place where almost every need could be met simply by asking around.

I arrived, for example, with a 1978 Ford F-100 pickup truck that I wanted to sell and replace with a car; within days of arriving I had it sold. And then replaced with a Nissan Sentra station wagon that also near-magically appeared at the right time.

When Catherine needed studio space, a chance conversation with Charlie, the superintendent of the building on Richmond Street where I was working, revealed that well-known lawyer Lester O’Donnell had just died. Lester had an office on the second floor of the building, a large 3-room suite overlooking the Basilica.

Of course we did.

Catherine occupied this lovely, bright space from 1993 to 1995. We were living just a block away at 50 Great George Street in an apartment with no living room, so one of the rooms in the studio became our de facto living room: we’d go home for supper every night, and then come back to the studio to watch TV, read, and so on.

When we moved to Kingston, PEI in the summer of 1995, Catherine gave up the downtown studio and built one for herself in our back yard, a custom-designed 16 by 20 foot wooden building that’s still standing 20 years later. It served her well and, because she’d designed it herself, fit her needs like a glove. She worked there for 5 years, until pregnancy caused her to step back from art work for a while.

Fast forward 13 years: we’ve moved back to town, Oliver’s born, Oliver grows up, Oliver goes to school. Catherine’s back in the market for a studio. She laments the loss of the country studio. She laments the loss of the Lester O’Donnell studio. Then, one day, I’m walking down Richmond Street and I spot Ben Stahl, the artist who took over the studio from Catherine when she moved out in 1995: during our chat it became clear that Ben was in the process of getting ready to move out of the studio, with no heir apparent.

I ran home like the wind and found Catherine: “you’ve gotta phone Charlie: Ben’s moving out of the studio!”

And she did. That very day she made arrangements to move back into the studio more than a dozen years previous.

And she’s been a happy tenant for the decade since.

But now it’s time to move again: the Lester O’Donnell studio is on the second floor, and there are a lot of stairs involved in getting there, too many stairs for Catherine to reasonably manage these days.

Time for another chance conversation, this time with the Parish Administrator here at St. Paul’s Anglican: “there’s not any more space in the basement you’re looking to rent out, is there?”, I asked. As it happened, there was, and after some months of rearranging and cleaning and painting by dedicated church volunteers, the room directly across the hall from the Reinventorium was ready for her to move in this morning: 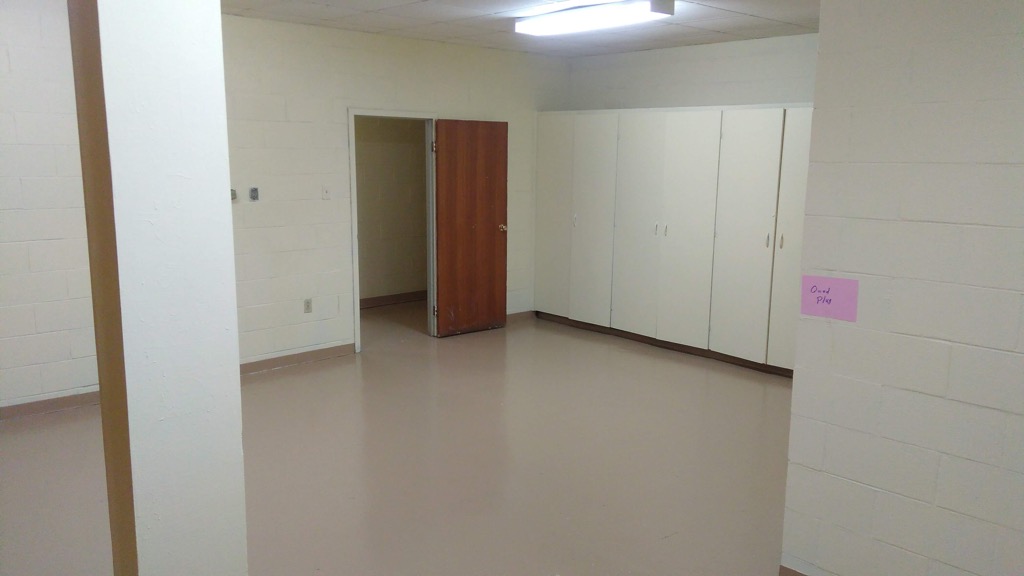 The movers were here for 3 hours, moving things down the block from the old studio, so that space is chock full of the tools of Catherine’s trade now. Lots of boxes to unpack. And the things she left behind to dispose of.

In addition to everything else, this move means that, for the first time in 27 years, Catherine’s work life and my work life will be cheek-by-jowl. We’ve always had our professional spaces and our home spaces; now, across the hall from each other at work, with our house directly across the street, the geography of our daily lives will become compressed into a circle with a diameter of 40 metres.

As I wrote to a friend earlier in the month, the prospect of this is equally terrifying and exciting.

Exciting because it means that we’ll see a lot more of each other than we have in a long time; what with being in love and all, that’s only good.

Catherine got a good introduction to the building this morning as her arrival coincided with a lunchtime Christmas decorating lunch for all the staff and tenants of the Parish Hall. Turkey soup, biscuits, partridge berry cake and fellowship. So far, the world colliding is going well.