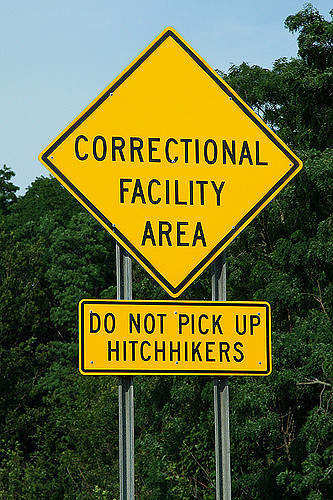 A comment by host Mark Peacock in episode #71 of the Travel Commons podcast about seeing “Don’t Pick up Hitchhikers” signs along a stretch of I-94 near a prison brought back memories of a road trip from Texas to Ontario I took in 1990.

I was returning home to Canada in my Toyota Tercel after a 3 month stint in El Paso. I had next to no money, and so I was travelling fast and low to the ground.

After spending my first night in Amarillo, I headed east on the I-40 toward Bartlesville, Oklahoma where I planned to meet up with my friend Bill who was rehearsing there. As I neared the Oklahoma border around noon I decided to pull off the highway for one last meal in Texas. Which is how I found myself in Shamrock, Texas looking for a parking space on the main street. I found one, locked up the car, and headed off to find some lunch.

And as I walked away from the car and felt to make sure I had my car keys I immediately realized that I’d made a big mistake: I’d locked the keys in the car.

As a stood there staring a the car wondering what I was going to do, I noticed that the rear “pop-out” window on the Tercel was partially “popped-out” and I figured that if I could get it open all the way I’d have a few inches of space to stick a coat hanger in and grab the keys.

That was the theory, anyway.

Unfortunately I didn’t realize that auto glass, when placed under stress, is designed to shatter into a million pieces. Which is what the read driver’s side window of my Toyota Tercel did as soon as I tried to pop it open.

With glass now all over Main Street I ran into the shoe store I was parked in, woke up the owner who was sleeping in the back, and borrowed a broom and dustpan to clean up the mess.

Then I decided that fate was trying to speak to me, that I was meant to get out of Texas right away, and I headed back to the highway.

As I pulled back on to the I-40 I saw a hitchhiker with his thumb out heading my way. As I’d thumbed around a lot in my early 20s — and because I was in need of some positive karma — I pulled over and picked him up.

He turned out to be an interesting guy, in the habit of moving back and forth across the country staying in shelters, picking up work when he could, and generally living the life of a vagabond. I told him my window story and we shared a good laugh and I told him that I could take him as far as Oklahoma City.

After about 20 minutes we started to pass the same sort of “Don’t Pick up Hitchhikers” signs that Mark saw in Michigan. While I can’t say that I didn’t feel a tinge of nervousness, by this time I figured I had enough rapport with my hitchhiker that he probably wouldn’t murder me, so we forged on.

I dropped him off at the western side of Oklahoma City in the middle of the afternoon, without incident, and then found a truck stop pay phone and started calling around to the auto salvage yards of the area to track down a replacement window. After a few hours of calls, and a few dead-end trips, I finally found a perfect match, for $25, at a wrecker that only dealt with Japanese cars. Fortunately it was a simple job to screw the window into place, and I was back on my way before sunset.

As I reached the turn-off for I-44 toward Tulsa, on the north-eastern side of the city, who should I spot at the side of the road, miles away from where I’d dropped him off hours before, but my vagabond friend. As things were going my way since I’d picked him up originally, I pulled over once again and we shared another good laugh about the unlikely coincidence of a second ride

I dropped him off at the Salvation Army shelter in Tulsa and continued on to Bartlesville. The rest of the trip was uneventful.

I once got a ride from a well-muscled and tattooed guy who had just gotten out of Dorchester Penitentiary. I was a little nervous, but it was far from the scariest ride I ever had.