Cosm (née Pachube) is a really useful web service if you’re interesting in managing open data. It’s what I feed the energy load and generation data provided by the Province of PEI to; it’s useful for data logging and visualization, and it’s a useful “hub” for routing data in and out of different systems.

One of the handy features built-in to Cosm is being able to add “triggers” to any data stream so that when something happens — the level goes above or below or equal to a given trigger value, for example — you can have it do something. The “something” in this case it to make an HTTP Post to a third-party website, or to emit a tweet from a Twitter account you connect to it.

Here’s a trigger I set up so that whenever the percentage of PEI’s energy load generated by the wind goes above 100%, a tweet goes out from the @peiwind Twitter account:

It turns out that the last few days have been good to Prince Edward Island, wind-wise, and so the trigger has gone of quite a bit. Here’s how the last 30 days of “how much of PEI’s energy load was met by the wind” graph looks like:

As you can see, we’ve tipped over the 100% level quite a few times, and the tweets have reflected this: 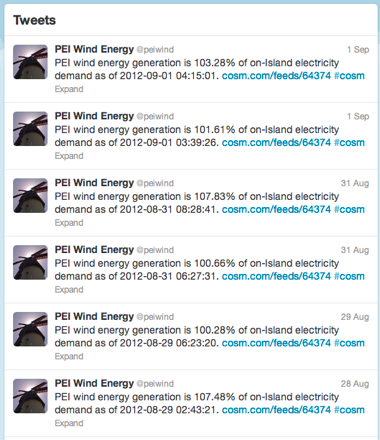 While tweeting is nice, what’s really nice is that the tweets themselves can then be considered data that can be fed to yet other systems. In fact with an account on If This Then That you can do that yourself; here’s a recipe, for example, that will send you an email every time the @peiwind account tweets: 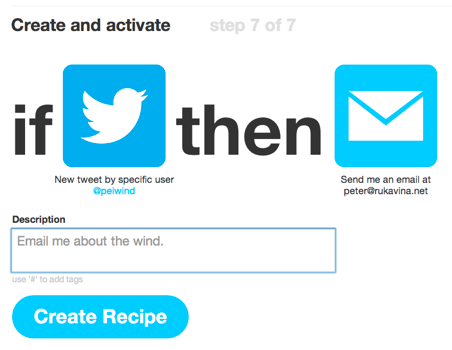 Instead of emailing, you could have the recipe call you on the telephone, or make an entry in your Google Calendar, or update your Facebook status. Or, with a Belkin Wemo switch, you could have your clothes dryer turn on.