It is standard practice here on Prince Edward Island for government offices to use special, earlier “summer hours.”

The City of Charlottetown describes its hours as follows:

And the province’s hours, which the City is following on from, are described here as:

Summer hours of 8:00 am to 4:00 pm are now in effect.
Summer hours are determined by Executive Council after consultation with the union.

Here’s the strange thing about summer hours, though: they were put in place as a sort of “mock daylight saving time,” as explained in The Guardian in 1963:

During the past few years, while other provinces were on advance time, this province had a form of Daylight Saving Time, called “advanced summer hours.”

The government took the lead by opening and closing its offices an hour earlier during the six months Daylight Saving Time was in effect in other parts of the country. Most business houses and people throughout the province followed suit and simply put their watches one hour ahead for the six-month period.

And so when John Diefenbaker visited the Island in May of 1962, his rally in the Charlottetown Sports Arena was scheduled for “9 o’clock Advanced Summer Hours”: 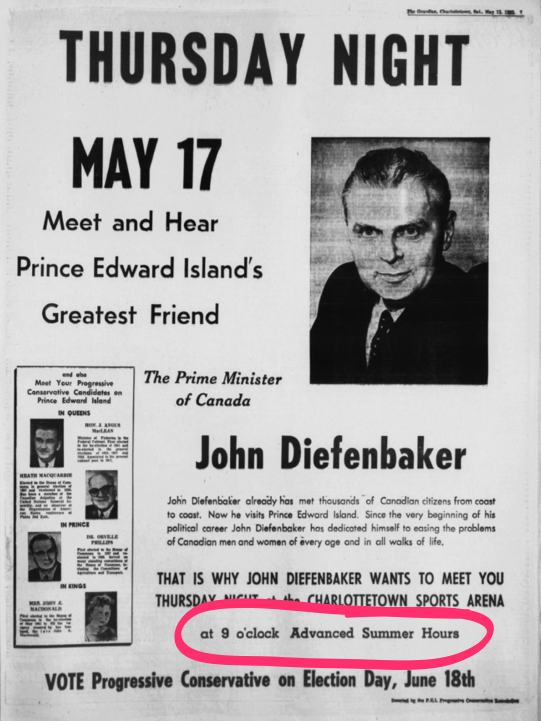 The curious thing is, however, despite the Island officially switching to use Daylight Saving Time in 1963, summer hours remain with us, albeit with only a 30 minute rather than 60 minute change.

IIRC, in my short time in the union environment in PEI, it was a position preferred by the membership - early hours in the summer were largely seen as maximizing the amount of time one might spend outside/in daylight hours, and getting up earlier was a little easier when the sun was already up.