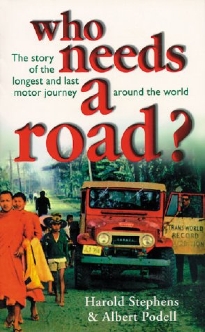 Who Needs a Road? was my introduction to driving around the world. I first read about the book in an review by Al Podell in blue magazine. Originally published in 1967, the book was re-issued in 1999. I bought myself a copy, based on the review, and read it from cover to cover in a couple of days. I was hooked.


The book concerns an expedition, begun in 1965, in a Toyota Land Cruiser, by Harold Stephens and Al Podell and a collection of irregulars. They started from New York City, headed across the Atlantic, across Europe, the Middle East, India, and Southeast Asia, Australia, across the Pacific, and up through Panama to New York City. They covered over 40,000 miles, and took almost 3 years. But they did it.


After reading the book, I wanted to know more: the closing scene talked about film that was taken of the expedition crossing over into the USA at El Paso, Texas. “Where was the film?”, I wondered.


So I tracked down the email address of the publisher, and sent off a note. Imagine my surprise when I received a reply shortly thereafter from Harold Stephens himself, now 30 years older and living in Bangkok. We struck up an email correspondence, and, using my Internet search skills, I helped Steve (as he is called by everyone) track down long-lost friend and acquaintances, both from the round-the-world trip and from his adventures afterwards.


And I tried to help Steve find the film. This led me on a wild electronic goose chase through Hollywood, across the US, and into Hot Springs, AR, where I tracked down the son of the man who had shot the film. Frustratingly, I was never able to get in touch with him, and so the film remains out of reach to this day.


After a year or so of working with Steve at a distance, it occured to me that we were presented with the unique opportunity of visiting Thailand with someone knowledgeable “on the ground.” We were a little uneasy about the notion of travelling so far with a nine month old son, but decided to explore the idea: I sent a tentative email to Steve, asking him what he thought of the idea. As he related in this article for the Thai Airways magazine, Steve thought this was a fine idea:


I guess I never expected them to come. This often happens, people make plans and then their boss gets sick and they cant get the time off or their grandmother ends up in the hospital. But not with Peter and Catherine, and their son Oliver. They were on their way and gave me their arrival information, and now I began to worry. Had I done the right thing? Here was a couple that had made only one trip outside of Canada, and that was to New York, a few hundred miles away. Now they were travelling half way around the world, so far away that if they travelled any farther theyd be on their way back home.

The funniest part of our voyage to Thailand is that both Steve and I realized that, although we’d made plans to rendezvous in the airport in Bangkok, we had no idea what the other looked like. As luck, or fate, would have things, we walked out of the customs line, I spotted Steve immediately, and we were on our way.


Needless to say, our trip to Thailand was phenomenal: there’s nothing like having a “man in Bangkok” to get you grounded and oriented. You can read more about our trip in a series of posts I made at the time:

Our trip to Thailand infected us with the “travel bug” and we’ve been across the US, and then to Spain since, and are eager for more.


If you’re looking to jump start a life of travel, Who Needs a Road? is a good place to start.

If you’re interested in reading more about Steve’s adventures, The Last Voyage: The Story of Schooner Third Sea is a good place to start: after the adventure related in Who Needs a Road?, Steve built himself a 71-foot sailing schooner and sailed about the south sea for 18 years.