CPAC, the parliamentary channel in Canada, ran a series of C-SPAN documentaries on The White House last week in anticipation of the Obama inauguration. Besides the rather mundane discussion of the Red Room and the Blue Room and the Green Room there was the amazing story of The Truman Reconstruction; my conception of The White House as an “historic building” was changed by images like this: 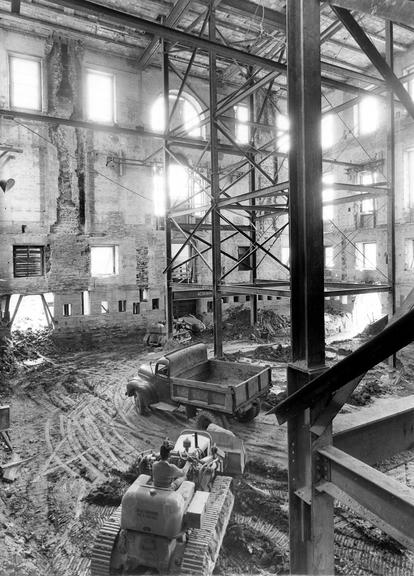 The “reconstruction” really was that: not a renovation or an addition, but a complete from-the-ground up rebuilding of the structure (although the exterior walls were buttressed and remained intact).

One of the anecdotes in the documentary was that the truck and bulldozer in the photo were too big to fit through the openings in the walls, so needed to be disassembled, carried inside, and then reassembled.

During the reconstruction, the Trumans lived in Blair House across the street; the West Wing, which was a newer addition, was not affected by the reconstruction and remained open and in use. Learn more at unofficial White House Museum.

Since you’re now “on campus” you may be interested that Main Building had similar (so called, “benevolent rejuvination”) treatment a few years ago. I think, somewhere, on campus there are really good pictures; admittedly not as impressive as the WH snaps.